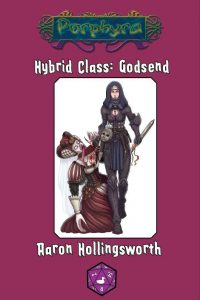 This hybrid class is a blend of paladin and porphyran assassin, which remains one of my favorite PFRPG-takes on the assassin. As a righteous killer, they must be good and get d8 HD, 6 + Int skills per level, proficiency with simple weapons plus hand crossbow, rapier, sap, shortbow and short sword as well as light armor. They get an aura of good and may use detect evil at will. They also get full BAB-progression. The class is intended to have good Reflex saves, but the column in the table NOTES THE WRONG VALUES. Unless 18th level is supposed to nerf Ref-save from +10 to +2, the high levels are wrong for the column – an oversight that even a cursory glance should have caught. 4th level yields paladin spellcasting, governed by Charisma.

The class gets a sneak attack variant dubbed secret smite, which applies when a target is denied Dexterity bonus to AC or when flanking a target. This starts as +1d6, and increases by 1d6 every 2 godsend levels thereafter. Sloppy: “If the target of secret smite is an outsider with the evil subtype, an evil-aligned dragon, or an undead creature, the bonus to dam­age on the first successful attack increases to 2 points of damage per level the godsend possesses.” I kid you not. That’s a downgrade. The godsend is actually WORSE at killing evil things. Also: reference to first attack is weird. OH, and secret smiting good creatures by accident wrecks your spellcasting and supernatural abilities for the day, killing a creature thus does it permanently. 2nd level yields lay on hands and quiet death (Stealth check when killing a creature in the surprise round to prevent notice). 3rd level nets immunity to fear and 4th level provides death attack, governed by Int. Sloppiness continues – we have references to sneak attack that should refer to secret smite.

As an aside: Secret smite is NOT a smite. It is not active. It’s always on. The name’s misleading and the ability just eats wordcount. Make it sneak attack and add a second ability that increases sneak damage versus smite targets. Anyway, 4th level also yields uncanny dodge and 6th level nets divine bond, for a weapon as well as the first mercies; 10th, 14th and 18th level expand the list of mercies available. 8th level nets improved uncanny dodge and an ability that lets you prep a corpse to make the target die once more if returned to life. A spell reference here has not been italicized. 9th level yields immunity to charm spells and SPs, but not effects. 12th level makes weapons behave as though good as well as the option to make a death attack after only one round of study. Detect evil can be sued as a swift action starting at 14th level and 15th level nets + Cha-bonus to secret smite damage versus evil targets and ignores all damage reduction. 18th level provides 1/week atonement. The capstone provides maximum healing as well as “sneak attack the godsend inflicts counts as a death attack, with no study required and regardless of the target’s suspicions.” Which RAW does nothing, since the godsend does not have sneak attack.

The pdf includes a brief code of conduct and 4 feats: One nets limited access to rook-spells. Hold Disguise nets 1/day use of lay on hands for disguise self. Yeah, wouldn’t waste a feat on that either. There’s another one that nets 1/day use of lay on hands as misdirection. Left-Handed Blade nets +2 to Bluff checks made to feint as well as swift action feints. The pdf closes with a HUGE list of favored class options for the vast amount of Porphyran races.

The one good thing here: The Colossus of Dhu, a CR 22 colossal, lion-headed construct that clocks in at CR 22 and makes for a really cool bonus pdf! The monster penned by Mark Gedak and Perry Fehr gets two thumbs up.

Editing and formatting are not good on a formal and rules-language level. Secret smite, the signature ability of the class, has not even been properly CCP’d. Layout adheres to a 1-page standard that is b/w and sports purple highlights. The pdf has no artwork apart from the cover and comes fully bookmarked.

Urgh. I don’t get it. The idea of the sacred killer is amazing and evocative. The godsend, though, is the least interesting incarnation of it. Its basic abilities are not interesting and lose what made the porphyran assassins cool. The class is super-linear and bland, lacking any distinct identity. The rules-language is not good either. I don’t get it, I really don’t. Aaron Hollingsworth can do so much better. He has done so much better. This, though, feels phoned in, uninspired and really, really bland. I can’t recommend this pdf. Unless you want the bonus file. The bonus critter is cool. My final verdict will clock in at 2 stars.

You can get this hybrid class here.

If you want a cool Assassin-class, I suggest getting either Purple Duck Games’ cool Assassins of Porphyra, or, if you like complex classes, Interjection Games’ inspired Momentum-based Assassin.