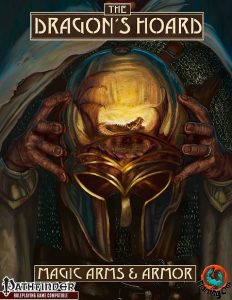 The first collection of magic items released by Flaming Crab Games clocks in at 17 pages, 1 page front cover, 1 page editorial, 2 pages of SRD, leaving us with 13 pages of content, so let’s take a look!

We begin this installment via 6 new magic armor special abilities: Featherlight armor duplicates featherfall and has reduced armor check penalty and increased maximum Dexterity bonus. Analogue to this, sea-faring armor provides water breathing and easier Swimming. While light resting armor allows the user to expend a move action to mitigate the armor’s arcane spell failure for enhancement bonus rounds. I’m not a big fan of giant wrestling armor – it ignores the size modifier to CMD and CMB when fighting foes at least one size category larger: Considering the often horrible values for Dex, this is a bit inexpensive at +2. Salving armor can end bleed damage as a move action, which generally is appropriate, unless using bleed-heavy system modifications such as TPK Games’ Laying Waste. Absolutely awesome and incredibly useful (and rendered via an artwork): Toy barding. It shrinks a mount to fine size…including info on food consumption. This one feels very magical and versatile and it solves many a “can’t bring my mount into the dungeon”-issue. Two thumbs up!

A total of 10 different special magical armors are up next – and all of them sport their own, neat, pencil-drawn artworks – two thumbs up for the artistic extra mile here! Bastion Plates makes you count as larger and allow for a limited use bludgeoning-damage causing shock wave. Cacophonous armor is interesting -penalizing Stealth heavily, the armor can cause targets around the stopping point to become stunned for one round, deafened for 2d4 rounds. Fungal armor is slightly problematic – the armor has a cool defense mechanism. Targets grappled can become engulfed in fungal growths that deal Con damage. These growth may be picked off as a full-round action – but activation is odd: “If grappled, as a standard action…” is the first clause and the final sentence here says “the wearer can’t willfully repress or activate this defense.” – so which is it? Does it require a standard action? Or not? Or does this automatically happen in conjunction with the first grapple? Similarly, the secondary option, a cloud of spores “follows the wearer” – so, does it trail behind the wearer? Is it an aura or an emanation? The wording of this item needs a bit of clarification.

The gemini armor is interesting – as a move action 3/day, it creates a duplicate up to 30 ft. away, which receives one standard action, but can’t perform SUs, SPs or cast spells. Damage caused to the double is transferred to the wearer. Interesting from a tactical perspective! Grasshopper armor helps when jumping – move action for +20…which seems a bit excessive. Jabberwock’s Dream protects versus vorpal weapons and the wearer can fire ranged fire beams a limited amount of times per day. Solid! Lightning Guard Leather has 3 charges per day; beyond swift action bonuses when fighting defensively, the armor’s charges can be used to grant a non-stacking haste-like attack when fighting defensively and finally, entering total defense as an immediate action is a nice trick. I really like this item, though the additional attack is more powerful than the other charge uses. There is also an anti-shapechanger armor and one that helps infiltrate the ranks of the lower planes. Finally, tehre is a shadowy armor that can duplicate mirror image.

Two shield properties allow a shield to provide sustenance or add shield bonus to touch AC. (Imho, shield bonuses should apply to touch AC in the first place, but that may just be me…suffice to say, I like this one – the massive +3 bonus is justified by making shield bash count as force damage, which is pretty strong!)

The book also sports 4 specific shields – the bombardier beetle shield not only helps versus acid, it also allows you to emit sprays of acid. There also is an animated tower shield that can be commanded to grant cover – and yes, it is an exception to the rule I can get behind. The Shield of the Dragon’s Envoy is less interesting, with fire resistance and social skill bonuses + tongues, while the shield-type changing variable shield is once again unique and interesting.

A total of 13 special weapon qualities can be found next – adaptive slaying increases the damage bonus gained to bypass the creature’s DR – which is a pretty good idea for most fantasy games – steer clear in horror and similar scenarios, though. On a nitpicky side – the ability should specify that it does not apply to e.g. epic DR, whose main catch is that it’s less than regular DR, but nigh unbypassable. Ashenstrike is very cool – when missing in melee, you can grant yourself a cumulative 10 % miss chance, capping at total concealment’s 50%. Note that you may miss on purpose and that it does not grant the additional benefits of concealment/total concealment, though. Still, at +1 bonus, this is a bit underpriced, considering its potential activation upon a miss. There also is a rather overpowered one – blistering weapons add +1d6 fire damage per attack AND continue to inflict this damage for two rounds, +1 round per additional hit. While Heal (and magical healing) can be used to halt the damage, the ability fails to specify which type of Heal-check is required – I assume First Aid. Still, this allows for pretty easy ongoing damage that requires serious action-investment to stop – considering flaming burst is +2, this would work better at +3 instead of its underpriced +2. Dehydrating weapons can cause fatigue on a failed save and deal bonus damage versus pants – odd: “The effect remains active until another command is given.” The weapon’s fatigue-effect, as written, has no “command” to activate it – rules-language here could be clearer.

Nice: Str and Dex damage versus constructs on critical hits, which at least slightly reward criting these foes. The +1 bonus enchantment drifting is interesting -when criting, you can expend an AoO to gain a free 5-foot-step – tactical and smart! Goliath weapons allow a wielder to use a weapon of +1 size category sans penalties. I also *really* like the greased weapon -at command, the weapon becomes slippery and requires a Ref-save to avoid dropping it, second command to end the effect. Pretty cool for signature weapons and in the hands of the right character, hilarious. Hellwreathed weapons deal half fire/half untyped damage and, at +3, is aptly priced. Lethal weapons increase crit multiplier – something we sure did not need – x4 is already exceedingly nasty. Odd: The one usual use and justification I could see for it, namely synergy with weapon mastery, is locked out – but then again, x5 is already broken as hell. Don’t believe me? Watch a PC get hit by a pick or scythe-crit and die in one hit. Reverberating is great for sunder specialists, converting the weapon damage dice of sunder attempts as damage. Starlight weapons allow for atk-rerolls and are lighter and virulent weapons allow for faster poisoning and increase the DC.

The final section of the pdf covers over 30 specific magic weapons: There e.g. are virulent hand crossbows that can turn into tattoos, blades that can be played as wind instruments (and hold poisons) or a blade that nets Eschew Materials and is automatically available as a proficient weapon for arcane casters. Somewhat problematic: A blade that lets you add +1 eidolon evolution to creatures summoned at the price of stabbing yourself for damage that cannot be negated. While it gets the min level to prevent abuse right, does the stabbing influence the spellcasting? Concentration required? I’d assume so, but I’m not sure. Zombie femurs that cause fear-based paralysis and poisoned spears are okay, though the paralysis seems a bit harsh, in spite of the low save. There is also a flail with a clarion attached that potentially sickens targets and may deal additional damage on crits. Temporary blinding tekko-kagi, flaming whips that let you transform into smoke – these are okay. The gemini sword, however, is interesting – the sword can split in two and grants Two-Weapon-Fighting while split – the effect lasts for two rounds, though the item fails to specify activation action – I assume “free” here. On the nitpicky side, the rules technically also would have needed to specify that the wielder needs a free hand to split the blade and that he can’t hand the second blade to allies.

A greataxe with a non-suppressible merciful quality is intriguing as well. Darts that cause lycanthropy and swords intended to work below water are solid and ice-themed starknives are a cool idea. Arrows that stagger foes instead of dealing damage are pretty intriguing. There also is a scarf that can cause Con-damage and even result in decapitations (powerful, but pretty awesome). A smelly dagger is okay, if not too exciting: More intriguing: A blade that can be used as a composite shortbow and fire arrows. There also are lucerne hammers herein – one that can crit natural armor away and another one that is the bane of flying foes…but only while the wielder remains earthbound. Negative energy-grappling whips and impaling weaponry that basically works like a bleeding grab can be considered interesting. A powerful, defensive scizore and a dagger that is particularly potent against identified foes is nice. I’m not sold on the volcanic maul – as a standard action, the earth breaker can unleash a 15ft. 5d4 cone of fire to be added to a melee attack – no daily limits. At 13K, this does seem a bit too much. I’d rather advocate a scaling number of uses depending on the wielder’s level. The spear that allows you to unleash bursts of wind at range feels more aptly priced there and has degrees of failure regarding the negation of its additional effects. Just fyi – there are more items than the ones I mentioned in the review.

Editing and formatting are good, though not perfect – I noticed some minor typos and , considering the amount of different people involved in the creation of this pdf, a bit more streamlining of rules-language would have been nice – there are quite a few deviations from the standard, though most can be ignored and are cosmetic in nature. Layout adheres to Flaming Crab Games’ 2-column full-color standard and the pdf sports a huge amount of beautiful line-drawn renditions of the specific items herein – impressive from an art-perspective! The pdf comes fully bookmarked for your convenience.

You can get these nice items here on OBS and here on d20pfsrd.com’s shop!
Endzeitgeist out.