Into the Wintery Gale Mini-Dungeon: Den of the Glacial Bear

Into the Wintery Gale Mini-Dungeon: Den of the Glacial Bear 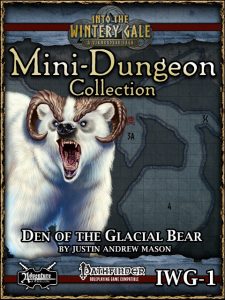 Since this product line’s goal is providing short diversions, side-quest dungeons etc., I will not expect mind-shattering revelations, massive plots or particularly smart or detailed depictions, instead tackling the line for what it is. Additionally, it should be noted that this is intended for use in conjunction with the upcoming “Into the Wintry Gale”-saga.

The PCs stumble across a heavily injured vikmordere-raider, who has been badly mauled by a glacial bear (stats can be found in the associated ItWG-books; if you don’t have access to them, template a bear with a winter/frost-themed template) and asks the PCs, if they save him, to save his brothers. The cave itself shows the brutal struggle between man and nature. Exploring the well-described, but otherwise pretty bland cave, the PCs can find survivors and finally face off with the glacial bear – who was defending her cubs from the vikmordere – but the angry beast isn’t playing nice…

Having defeated the creature, it’s up to the players how to treat the surviving cubs – leaving them to their fate is a sure death-sentence…

Justin Andrew Mason’s first Into the Wintry Gale-expansion sports nice read-aloud text and a brief sidetrek – but that’s about it. Personally, I got nothing out of this one – the fluff is nice, but there isn’t that much to do – explore the caves, witness the build-up, fight boss, done. It’s an okay mini-dungeon, but lacks the evocative setting the better ones have in spite of their brevity. Basically, this is a creature-showcase for the creature in the associated book. I will settle on a final verdict of 3.5 stars, rounded down to 3 for the purpose of this platform.

You can get this mini-dungeon here on OBS and here on d20pfsrd.com’s shop!
Endzeitgeist out.