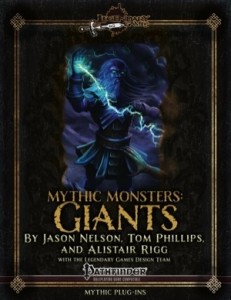 Okay, so this one has a problem – giants frankly suck in Pathfinder – their rock throwing is bad, they can be brought down by sleep and there are no rules for properly falling on PCs, squashing them – thankfully, this installment of Mythic Monsters addresses just these issues – hurling rocks at squares, squashing foes by falling on them, resiliency to spells and effects specifically targeting humanoids, ignoring difficult terrain – I hope Paizo takes a cue from these for the upcoming Giantslayer AP! I know I’ll add these to all giants I throw at my players!

We also receive 4 new feats for awesome blows at range via boulders, power attack via boulders and even rolling them towards the players – nice!

Okay, this parts out of the way, let’s take a look at those giants, shall we? At the lowest echelons of the power-scale, we receive Moss Trolls and Freshwater Merrow, with the former receiving an increasing, extremely lethal regeneration and the latter receiving a hooked harpoon, including ranged grappling/draging of foes. The CDR 7/MR 3 Saltwater Merrow also receives these, btw. – and great tossing of foes overboard and destroying ships. While I do enjoy the moss troll and saltwater merrow, its freshwater brethren feels a bit bland in direct comparison.

At CR 6/MR 2, the Brute Wight may demoralize with his attacks and throw tombstones and similar rocks, causing energy drain – nice imagery! The CR 7/MR 3 Rock Troll may avoid the sunlight petrification temporarily via mythic power and also has his lesser moss brethren’s superb reflexive regeneration – still, I wished these guys had gotten even more beyond their fortification and increased defenses.

The Stone Giant Elder at CR 11/MR 4 can enter a rage-like, reach-increasing form and throw boulders that smash through any resistance in the path of the stone giant’s throw to the maximum range. Neat!

Now quite a few of these giants, like their mythic draconic brethren, also have the “giant” simple template applied – the Frost Giant (CR 12/ MR 4), Cloud Giants (CR 14/MR 5) and Storm Giants (CR 17/MR 6) all receive this treatment. It should be noted, that a non templated version of the stats is provided for the Frost Giant, but not for his brethren, which is a pity. Frost giants get truly lethal shockwaves and an aura of numbing cold, whereas cloud giants make use of a mythic feat from Mythic Minis: Feats for Monsters (reprinted here) and may coalesce and shape clouds into solid terrain and beyond the theme of erecting literal castles in the sky, the fee-fie-foe-fum smelling of smaller creatures is also represented here. Storm Giant Elder, meanwhile, learn to ride the lightning, may grant storm-themed enhancements to weaponry and meld electricity with thunder. Now I have that Tiamat-song ringing in my head again…

The CR 15/MR 6 Athach may use mythic power to instantly tear pinned foes asunder (YEAH!) and exact stunning and even melee countering tricks with their claws – glorious build, cool tricks, two thumbs up!

The CR 22/MR 9 Rune Giant receives improved giant control, permanently blind those witnessing their runes, blast foes with showers of deadly sparks from their runes and parry/parry-sunder melee attacks. I’m generally no fan of competing atk-rolls, so not sold there. Weirdly, a version with the Giant-template is provided here, but adheres to a different layout format than the other instances of the thing showing up.

The CR 18/MR 7 Jotund Troll receives once again the cool reflexive regeneration and a confusion-inducing roar, but otherwise could have used a unique trick to reflect its heritage. This one disappointed me somewhat.

The new creature of this book would be Angurboda, at CR 13/MR 5 could be summed up as a nasty giant witch with lamashtan influences – a gigantic mother of monsters, complete with cauldron, evil eye, etc. – she can gestate swiftly and generate a vast array of creatures – a more deadly opponent than her CR would suggest and one of the most awesome unique creatures in the series – and that’s saying something! The proper and extensive information on habitat, ecology etc. are the icing on this creature’s awesome cake – two thumbs up!

Editing and formatting are very good, though I noticed some formatting inconsistencies in layout. Layout adheres to legendary Games’ two-column full-color standard and the two pieces of original art are neat indeed. The pdf lacks bookmarks, which is a comfort detriment.

Jason Nelson, Tom Philips and Alistair Rigg have crafted some nasty giants…and they leave me torn like no Mythic Monsters-pdf before. I do love the inclusion of non-templated versions, I’m not a fan of this practice not being uniform. I love the super-regeneration for trolls, but think they overall got the short end of the stick regarding cool abilities. The giants themselves are nice, but the two best draws herein would be the new creature and the material in the beginning that makes giants work as they ought to. These two pieces of content alone are almost worth the book – they’re this awesome. That being said, my impression was that these giants have a bit more blank space on some pages than they ought to and quite honestly, I feel that some of them could have used some additional tricks.

All Mythic Monster pdfs are at least good, most are very good/excellent. This one alternatively moves among the best and among the “worst” of the series (which translates to only being good/okay), rendering a finding a final verdict a tricky business. In the end, this one felt, in spite of its brilliant highlights, somewhat less glorious than some other installments of the series and with the slightly less polished formatting and generally uninspired trolls. I will hence settle for a final verdict of 3.5 stars, rounded up to 4 for the purpose of this platform – though any aficionado of giants should get this for the alternate rules and the new creature alone – they’re worth the asking price by themselves!

You can get these giants here on OBS and here on d20pfsrd.com’s shop!