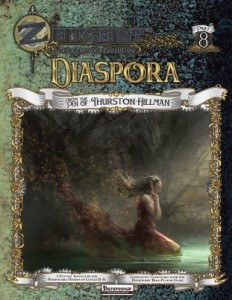 The 8th installment of the (so far!) legendary Zeitgeist-saga clocks in at 99 pages, 1 page front cover, 1 page editorial, 1 page ToC, 1 page SRD, 1 page back cover, leaving us with 94 pages of content, so let’s take a look at whether this installment can keep up the stunning momentum of the saga!

This being an adventure-review, the following contains SPOILERS, including some minor ones for previous modules in the saga. Potential players of this massive AP should jump to the conclusion.

No words would fit better the premise of this module, wherein Zeitgeist changes paces once more – after infiltrating the great conclave of the Obscurati in Zeitgeist #7, dining and talking to the masterminds behind the vast conspiracy and shaping the very ideology of their opponents, the constables of the RHC may have actually changes sides – but after the culling of the ranks that unified the conspiracy, the Obscurati are now more dangerous than ever before. For the first time, however, the PCs may actually be in the loop regarding the dread masterplan of their adversaries – still, the Ob machinery is grinding on, but there may be a grain of sand that can bring the gears of revolution to a halt: This proverbial grain would be Kasvarina Varal, one of the founders of the Obscurati – separated from her memories, the eladrin woman may be the one thing that can put a stop to the plans of the conspiracy – thankfully, the PCs will have probably deduced ways to find Kasvarina and if they don’t, their leadership may have an idea – so off they go towards Elfaivar – provided they can best the fleet combat waiting. *sigh* Yes, this is the time where I once again can ramble about the default naval combat rules of this AP sucking hard. I recommend you get Frog God Games’ Fire as She Bears instead.

Tracking the vast colossus towards Kasvarina – via prestige and connections, their trek through the jungles will still be less than pleasant, and worse – the Ob are up to their game and have sent competing teams out and the trail leads onwards – into artillerist fire and ambushes, before the PCs have to face a lethal 10-headed lion-creature crafted from the stuff of dreams itself – and yes, the heads have powers conspicuously in line with certain IP-protected eye-themed creatures. 😉

Beyond these trials, the PCs may meet Asrabey again and finally make contact with Kasvarina, who then fills the PCs in regarding her memories of her experience of the eladrin diaspora -alas, Kasvarina is not the woman she once was. bereft of the traumatic experiences of her life, she is not a tabula rasa, but rather a story half-written. If will be up to the PCs to accompany her and put the triggers of recurring memories into perspective and influence how her personality evolves this time around – will she become the woman she once was, something better or even something worse? The theme of diaspora extends from the external to the internal of Kasvarina in a clever use of the concepts. Getting acceptance in Sentosa is just the prelude to the quest to reclaim the artifact, in which Kasvarina’s memories are stored – only to walk right into the conflict between weretigers (non-evil, btw.) and clergy. While the general set-up here is great, I was kind of miffed by the John Smith/Pocahontas-reference (describing the lack of an easy solution) in one sentence of DM-advice-text. I’m aware of the myth, but having had plenty of academic experience with the topic, the cultural bridging proved to be less harmonious than popularized by Disney. That, however, remains one pet-peeve of mine and does not impede the quality of the module.

On a more awesome side, the PCs will have to brave various challenges aligned with various times, seeing the shape of the distant past and the things to come. The artifact then allows for access to the meat of the module – using it, the PCs can physically enter the memories of others, potentially even retrieving objects from inside – oh, and they can reap the benefits of their investigations and experience more of Kasvarina’s past – alas, the triggers are spread around and a return to the Crypta Hereticarum is in order – which also doubles as an option to strike an uneasy alliance with Pemberton via his deadly bots. Worse than potentially being indebted to the demoness in the crypta, the party will have to find a way to infiltrate the capital of Danoran – which coincidentally lies in a zone of absolute dead magic spawned by the death of a goddess. Yes, not even supernatural abilities. Now watch your high-level PCs squirm. Or you would, did this follow the established rules for dead magic/antimagic zones.

Even worse, any roll caps at 30. Yes, this is nasty…and for once, I am not a fan of this cap – it feels a like cheating to me, potentially penalizing PCs that would have a chance to shine in this environment. I also would have liked specification on how summoned creatures, familiars, eidolons etc. interact with this zone – the pdf remains silent apart from “1 negative level for every magical creature, even when usually immune to it.” This is not enough in my book and woefully imprecise. Furthermore, the cap literally BREAKS the rules – Take a look at how CMD/Feinting etc. work and do some quick checks for PCs – being immune to feints and bluffs is not hard here and the cap makes the whole system come apart when it comes to opposing rolls…or several other basic rules-options. My advice is to ignore this utterly bizarre and ill-conceived notion in favor of a better take more in line with the system.

On a more positive side, the D-day-style infiltration of Danor, including potential combat with a tank, is pretty challenging and interesting and an ascent accompanied by continuous barrages of memories does not help either. Finally, things become rather heated – the colossus Borne arrives to get his “mother”, while Nicodemus himself shows up to abduct Kasvarina (or kill her) and interrupt the final memory, wherein a goddess was killed. The final battle against Nicodemus is not only extremely climactic, it also is exceedingly difficult – and may have the PCs stranded in the Dreaming, as the dread plans of the obscurati grind ahead….

The pdf provides a massive appendix of memories (optional ones), stats for NPCs and adversaries (including troops – nice!) and a short gazetteer of Methia.

Conclusion:
Editing and formatting are very good, I did not notice any significant glitches. Layout adheres to Zeitgeist’s beautiful 2-column full-color standard and the pdf comes fully bookmarked for your convenience. Artwork is a blend of stock-art and glorious full-color original pieces. The pdf’s lavish full color maps benefit just as much as the pdf from the layered pdf, which makes it easy to customize the amount of ink/toner you’re willing to expend. It also allows you to make the maps player-friendly.

I am a huge proponent of the concept of this adventure – the concept of helping shape a personality, of going from the global to the personal perspective and actually providing a believable person is awesome. I adore this pdf’s premise and its execution by Thurston Hillman is superb and well-written, as I’ve come to expect from Zeitgeist.

Now at the same time, I did feel like this installment did a bit of “cheating” – at this point, I can shrug off the lame naval combat rules the series uses. Yes, it’s a bit of work to make conversions, but the play-experience is worth it.

Conversely, I have never complained about Zeitgeist breaking some of the default rules-assumptions of the Pathfinder-rules – why? Because the campaign guide and player’s guide provide ample justification for the changes in how flight, teleportation etc. work and ultimately are enablers for the story, not restrictions. The changes are organic and part of the world’s setting and as such, valid in my book. Where I get grumpy, though, would be the antimagic premise herein – in PFRPG, there are two canon, established and well-codified types of antimagic zones and this pdf just ignores them in favor of a rather ill-defined sidebox that not only leaves questions open, it also feels like a cheat. I know that my players did not take kindly to the arbitrary restrictions imposed on them, especially seeing how they deviate from how things usually work.

As a recommendation for a more interesting solution, Interjection Games has released a FREE pdf of incremental antimagic a DM may enjoy as an alternative.

Now like other Zeitgeist installments, this pdf still is one awesome read and provides thoroughly unique and awesome challenges all around – Diaspora is a great module, though one that has its second half slightly tarnished by the unnecessary antimagic cop-out: In fact, in spite of my complaining above, Diaspora’s innovative take on a personal and global tragedy, the memory-delving as a great substitution of time travel without the massive time travel logic glitches – all of these make Diaspora a worthwhile and great adventure – but one that is slightly more rough around the edges than the previous installments. Yes, it only has this issue in a small part of the overall book, but here, the impact was jarring. Hence, my final verdict will clock in at 4.5 stars, rounded down to 4. Note that if you are willing to properly iron out the non-sense restrictions introduced in the second half of the module, this still should be considered a top-notch buy.

You can get this installment in the epic Zeitgeist AP-series here on OBS!

You prefer 4th edition? You can get Zeitgeist for these rules here on OBS!