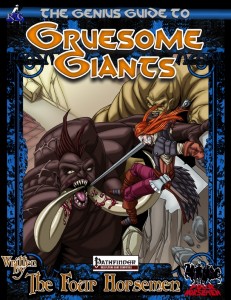 This mini bestiary clocks in at 24 pages, 1 page front cover, 1 page editorial, 1 page SRD, leaving us with 21 pages of content, so let’s take a look, shall we?

Giants aren’t subtle. They don’t lend themselves well to horror and so far, the undead templates released as “Gruesome” hit exactly that spot – so what is this about? Well essentially, it’s a book to spice up giants and make them as “OMG -GIANTS!!! RUN!!!!” as possible. This is achieved via templates, though we also receive sample statblocks for giants to drop in as written into a given campaign, so let’s go down through it, shall we? First of all: Shock ratings are back and part of the templates

First of the templates would be the collector -these guys wear armors of severed body parts (!!!) and will bash foes to mush with torn off limbs from their adversaries – or, they’ll just throw them at you! Grisly imagery, for sure and at CR +2 a nice template…but it does have one weakness – it has no way of actually severing body parts. I mean, how nasty would it have been to have a giant pluck limbs off a character and then bludgeon the puny smallfolk to death?

Contorted giants (at CR+1) may squeeze into small spaces and may suddenly increase their reach with a mechanically cool and imagery-wise iconic ability.

If you’re halfway fluent in Gaelic mythology, the Fomorian Giants (CR+2) need no explanation – if not, well, they come with a nice curse-aura that twists those nearby. The CR+2 Forgotten are the first template herein that truly blew my socks off – essentially, they shift in dimensions, gaining a massive miss chance and actually may forget the giants. Yeah…that WILL make for damn creepy narratives! Even before the ability to reach through the folds of space into the innards of enemies.

More visceral, the CR+2 maneater template may shatter bones with each attack (now we’re talking!), may grow by eating humanoids and may grapple multiple foes, should they so choose. Weird regarding the growth ability – it specifies “Once per month”, but also that a maneater can only benefit once from it – so which is it? Does the growth revert?

Masochist (CR+1) creatures may pierce their flesh (great kuthonite template) and thus disarm weapons that deal damage to them. They also receive bonuses when below 3/4 maximum Hp, though that calculation feels even more foreign than the 1/2 Hp/bloodied design seen in other publications – not a fan, but purely on an aesthetic level.

Reaping Giants at CR +2 receive a plethora of nasty universal monster qualities that make them nigh-impossible to surprise and also impose negative levels on foes. At CR+2, Undying giants become magi of their HD with spell mastery applied to the spells (!!!) and terrible forgotten lore. Unstoppable giants, on the other hand, receive deadly smashes that count as adamantine and particularly painful charges.

Now before I go on to the supplemental material herein, let me mention one crucial component I *LOVE* herein that I have so far failed to mention – each of the templates comes with one or more weaknesses clever players can exploit – whether it be the ancient oaths undying giants have sworn, the compulsion to charge foes, susceptibility to [good] spells – each template has a cool way for smart players to even the playing field.

If you’ve followed my reviews for any period of time, you’ll know I’m a huge fan of horror mechanics – I.e. “If you fight without an idea/plan, you’ll probably die.” This extends to how I handle my fantasy campaigns as well – exploiting weaknesses, researching etc. – that makes a triumph of so much sweeter and rewards players for their brains as opposed to luck/brawns. Two thumbs up -I wished all (or many!) monsters had options like this!

Now a total of 20 feats, mostly for large foes with insane strength scores, provide better options for awesome blow (crit foes, potentially smash them to the ground), add smash damage to overruns – i.e. these feats allow you to amp up the damage output of these guys quite nastily. It takes some time to get by how far, but oh boy, if you do it right…ouch!

Finally, a wizard and ranger archetype as well as a sorceror bloodline complete the options – the wizard may trip foes with spells and increase CL, the ranger increases his/her prowess by harvesting the essences of the slain and the sorceror bloodline is solid, but nothing I haven’t seen before. When compared to the imaginative templates, this crunch feels less inspired.

Editing and formatting are very good – there are next to no significant glitches herein. Layout adheres to RGG’s printer-friendly two-column standard and each sample giant gets a cool full color original piece of artwork by Jacob Blackmon. Kudos! The pdf comes bookmarked and hyperlinked for your convenience.

The Four Horsemen (here: Steven T. Helt, Dan Dillon and Steven Rowe) deliver a cool pdf here – the giants themselves are nice builds, the templates cool – that being said, like in most collective designs, we have a discrepancy in design choices here, one less pronounced in the pdf than in other books, but it is still here – some of the giants are downright genius (Undying and Forgotten come to mind), while e.g. the masochist or the harvester template feel less inspired. Over all, the average quality is still exceedingly high and the inclusion of weaknesses makes these templates so much cooler.

The feats are also damn nasty food for a DM, but food that should be kept out of the hands of players – I can make VERY nasty builds with these and it is evident that they are intended as monster feats, so beware there. The additional options provided as archetypes and bloodline felt a bit like an addendum to me – compared to the monsters and templates and feats, rather uninspired, but your mileage may vary.

Now this may sound a tad more critical than it ought to – this mini-bestiary WILL amp up your giants and make them proper forces to be reckoned with. As such, the pdf does its job well, exceedingly well even. And, in parts, it is downright GENIUS and made me cackle with glee. As such, I can recommend it rather highly at a final rating of 4.5 stars, rounded up for the purpose of this platform – for a full 5 and seal of approval, some of the mechanics felt a bit too conservative OR wonky for me, but that does in no way make the pdf less of a good buy and is mostly cosmetic.

You can get these giants here on OBS and here on d20pfsrd.com’s shop.