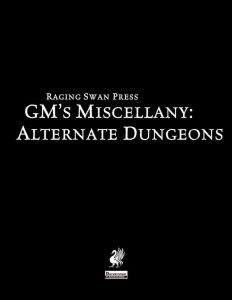 This compilation of the Alternate Dungeons-series clocks in at 75 pages, 1 page front cover, 2 pages of advertisement, 1 page editorial, 1 page ToC, 1 page SRD, 1 page back cover, leaving us with 68 pages of content, so let’s take a look!

There is a meta-reason for the way in which dungeons have become this popular in our games; they represent a closed environment that is simply easier to handle for the GM than a wide open sandbox or open wilderness adventure; it can be predicted more easily, etc. That being said, anyone who has played a dungeon-campaign before (or GM’d one!) can probably attest to the necessity of changing paces, dressing, etc. – and changing scenery. Few veterans will be content with walls upon walls of stony dungeons and caverns – sooner or later, you have to alternate the scenery, right?

Well, yes, but at the same time, this means that other considerations apply – whether it’s a good depiction of sewers (See Gaming Paper’s “Edgewater’s Folly” for an example of that done right…), a ruined village or a weird, druidic/fey-ish hedge maze, there are plenty of cool sceneries to explore – and these obviously come with changed rules by which the respective environments operate, right? Lack of ceiling equals, for example, a changed usefulness of Climb (no climbing on ceilings, but potentially climbing OVER walls!), and an upgrade for the ability to fly via diverse means – these all need to be kept in mind.

And this is where this series comes in – in each installment, we take a look at one less common dungeon trope. In the beginning of the respective chapter, we take a look at general considerations in a basic manner – not in the level of detail I’d like to see, but better than nothing – we cover hazards, special uses of powers etc. here and move on to a dressing table for the alternate dungeon. These often constitute high points for the respective entries, sporting some seriously evocative ideas. From there, we move on to a short recap of suggested sample denizens. While I get why these lists often focus on Bestiary I and basic critters, ultimately, that makes these lists only useful for beginner GMs. Creature-modifications or the like would make sense here, but I digress.

The respective installments also feature traps, haunts, hazards, etc. – but most of the time, these do not amount to complex options and remain flavorful, if a bit simple. These sections, however, also often sport terrain properties which very much can be considered to be helpful. Finally, we close the respective installments with sample adventure hooks – many are interesting and creative, but there are a few filler hooks as well.

So there you have it – that would be the basic structure of the series. This compilation contains abandoned temples and villages, alchemist laboratories, haunted houses, infested sewers, mystic groves and mystic ruins. I have written reviews for all the individual installments, so, if you do require further guidance, please consult the respective reviews. The alternate dungeons herein are presented alphabetically, just fyi.

Editing and formatting re very good on a formal and rules-language level. Layout adheres to raging Swan Press’ elegant two-column b/w-standard and the pdf sports nice b/w-artworks. The electronic version comes in two iterations, with one being optimized for screen-use, while the other is intended for the printer- kudos there! The pdf version comes fully bookmarked. I can’t comment on the print version.

Alexander Augunas, Nicholas Wasko, Mike Welham and Daron Woodson have created a nice series here…but unlike most such compilations by Raging Swan Press, I see honestly less benefit in having this series all compiled neatly in a single tome. You will only ever be using one of the chapters at any given time, and considering the prep-work alternate dungeons impose on the GM, you’ll have less immediate switching requirements. The dressing-components are well-crafted and I found myself really enjoying the series as a whole…but ultimately, this series, as a whole, may be the one I wished Raging Swan Press rebooted and changed.

The brevity of the files often works against them when we look at them as intended for novice-GMs, who can frankly use more hand-holding regarding the peculiarities of the respective alternate dungeons. On the other hand, veterans will consider the half-hearted denizen-recommendations less useful; a comprehensive list covering multiple bestiaries would have helped veterans, but focusing on the basics…makes that section pretty much a waste of space in all installments. The hooks, in some instances, are great – but also sometimes require some GM-skill to pull off. Ultimately, the series suffers from its format and can’t unanimously cater to either veterans or novices; it remains a high-quality series, but one hampered by its format.

Ultimately, I had hoped that this compilation would expand the individual entries to make up for it being less useful than in comparable Raging Swan series to have all in one place. Don’t get me wrong – this is a good offering, even though it falls short of the excellence the series could have provided. If you already own the constituent pdfs, I’d suggest printing out what you need instead. My final verdict will clock in at 4 stars.