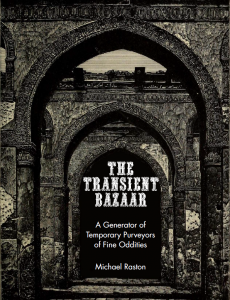 Okay, so this pdf clocks in at 21 pages, 1 page front cover, leaving us with 20 pages of content, so let’s take a look!

Okay, so what is this? It is, in essence, a bazaar-generator, and a pretty potent one. While nominally designed for the setting of Infinigrad (which I REALLY want as a hardcover!), the bazaar is particularly suited for cities such as Planescape’s Sigil, China Miéville’s Bas-Lag, Lost Spheres Publishing’s “City of 7 Seraphs” or similar high fantasy/weird metropolises with a serious weird vibe. It also works well for the strange subterranean races, just fyi.

In Infinigrad, the bazaar grows against the outer walls of the Bone Fortress, fueling the appetites of the Guild Dogs – the parlance for adventurers in service to Infinigrad’s mighty guilds.

The generator is easy and painless to use – first, you roll a d6 to determine the amount of things that are currently in season in the market, and then roll on a d20 table this often. The d20 entries are pretty awesome: “Changeling chemicals, dream dusts and rare reagents”, for example. (As an aside: in Infinigrad, “dust” is slang for drugs.); you could also happen upon elemental slaves and tamed manifestations,, tinctures of the Mossen craft, outlawed military accoutrements or fleshcrafted living transport.

For each thing in season, you roll 1d4 to determine the number of stalls that you can find, and record the number for each type of goods. And then, one of the coolest things herein starts – there are 16 pages of artworks of sorts – public domain images of various stalls, tents, etc. These are overlayed with a grid of 6 by 8; you roll a d6 and a d8, and check the respective page: There are 6 pages of stalls, 6 pages of sellers, and 4 pages of “aspects” – the latter can be combined with stalls and sellers to generate a sort of odd conglomerate. You could get ornate gazebos with lurid banners and purple-skinned hunchback vendors, for example.

For the vendors, a d10 table of mercantile raison d’êtres, 12 sales techniques and 16 entries on how you can purchase the goods are provided, the latter including demands for quests, sacrifices, etc. as well as the usual demands.

Editing and formatting are good on a formal and rules-language level. Layout adheres to a two-column b/w-.standard for the text, and the massive visual generators provided are pretty awesome indeed. A more printer-friendly version has been provided for your convenience, but both versions do not feature bookmarks, which is a bit of an annoying comfort detriment.

The idea of Michael Raston’s visual bazaar-generator, supplemented by impressive, but oh-so-scarce prose, is a great one. I love the idea, and it really helps to keep the game flowing; once you’ve understood how it operates, you can quickly and painlessly generate all manner of odd stalls and things. If anything, the one thing I do not like about this supplement, is the fact that it’s so short – the tables for good, merchants, etc. could have been longer for my tastes. That being said, this is available for PWYW, and frankly, it’s a steal and a handy supplement to have. If you’re looking for a useful generator for strange markets, look no further – 5 stars!

You can get this inspired generator for PWYW here on OBS!

If you’re enjoying my reviews, please consider leaving a direct donation or supporting my patreon.