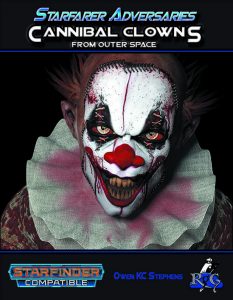 This installment of the Starfarer Adversaries-series clocks in at 15 pages, 1 page front cover,  1 page advertisement, 2 pages of SRD, leaving us with 11 pages of content, so let’s take a look!

It’s part nanite swarm, part viral infection, and all horrific – the Grimaldi Strain, an infection that turns creatures into CANNIBAL CLOWNS!! It’s not easily transmitted, thankfully – only those incarcerated for more than a week may be infected, but still…do you want to save them? Really? But…what if their feet turn longer and longer?

How do you build cannibal clowns? Well, they are monstrous humanoids with the combatant or expert array. They can have any CR, but some types of clowns are more common for some CRs. Cannibal clowns all have darkvision 60 ft. and when partaking of sentient meat for 10 uninterrupted minutes, they regain their CR worth of Hit Points, but only once per creature they consume. Cannibal clowns have a telepathy of 100 ft. that can be heard by anyone with Profession in a clown-like skill, hearing strange whispers – this also nets blindsense (cannibal clowns) with a range of 5 times Profession ranks feet. (Nitpick: “feet” is missing.) Higher rank cannibal clowns automatically become aware of ANYTHING lower-ranking cannibal clowns within the same SOLAR SYSTEM discover. They also get an untyped +20 bonus to Disguise checks made to appear like a brightly-painted entertainer. Disintegrators look like seltzer bottles, grenades like pies, etc. Making an attack cancels this ability for 10 minutes. Cannibal clowns count as humanoids, monstrous humanoids and undead, and effects that target only one of those affect them as normal. They take the worst effect possible, if in question. Oh, and one more thing: ANY number of cannibal clowns may fit into a vehicle or space ship. ANY NUMBER. They are immune to negative energy, diseases, exhaustions, fatigue, paralysis, poison, sleep and stunning – however, this immunity is weird, in that they instead start to creepily laugh for 1d4 rounds, becoming flat-footed, so clever players can exploit this.

The pdf then proceeds to walk you through the process of making the respective cannibal clowns: Buffoons, for example, have double the normal HP, EAC of 4 lower, KAC of 2 lower, and when they’re hurt, it’s funny, so non-cannibal clowns may be briefly staggered by them suffering  critical hit… Speaking of which: They have vicious criticals. These apply when the clown beats the AC by 5 or more. They also sport 7 custom critical hit effects that include acid flowers, endless scarves to entangle targets, and from killing joke to “got your nose”, the Joker pun-game is strong with these.

Tramps get one of these critical effects, get vicious critical and fill up their special ability slots with schticks – these would be 5 special custom abilities, such as the option to breathe in missed ranged attacks and blowing them back to the target. Wiseguys gain two critical hit effects and can choose which to apply, but don’t have vicious critical. They get one envoy improvisation and may fill the rest of their slots with schticks. Ringleaders have vicious critical, two of the new critical effects (that BOTH apply!), use the envoy class graft, and get +1 schtick in excess of the ones they get via their special abilities.

A CR 1 buffoon, a CR 4 tramp, a CR 7 wiseguy and a CR 10 ringleader are provided with sample stats for your convenience. The wiseguy’s Dexterity rating if off by one (should be +5), but the value is correct in e.g. initiative.

Even cooler: There is an appendix that lists cannibal clown weapons – dog leashes, butterfly nets, guns with a “bang”-flag used to bludgeon, etc. – love them!

Editing and formatting are very good on a formal and rules-language level. Layout adheres to the series’ two-column full-color standard, and the pdf has no interior artwork apart from the cover-piece. The pdf comes fully bookmarked with nested bookmarks for your convenience.

Yessa! Owen K.C. Stephens delivers big time in this supplement! The cannibal clowns are brutal adversaries, and the modifications made to their creation, the detailed walkthrough – pretty much everything here is cool. I love the unique abilities, critical effects, the whole angle of their creation, the small tidbits…and guess what – the pdf is actually funny in a darkly-twisted way I very much enjoy. This is more than some throwaway critters – this is a delightfully coulrophobia-inducing cornucopia indeed, and as such, gets 5 stars + seal of approval. Easily the best Starfarer Adversary-supplement so far!

You can get this inspired mini-bestiary here on OBS!

Enjoying my reviews? Please consider leaving a donation, or joining my patreon.