Path of the Reluctant Hero

Path of the Reluctant Hero 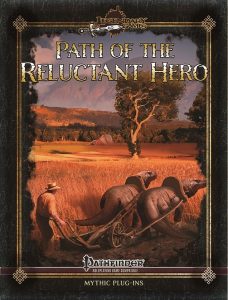 The fish out of water, who suddenly is drawn into circumstances and is way over his head – there is no single narrative trope that manages as well to equalize the knowledge of the reader and character among narrative strategies…but, alas, at the same time, many an anime and book has shown that this gambit can backfire horribly. It is pretty interesting, then, to note that this type of narrative device is rarely employed in roleplaying games; the peasant rising from humble beginnings, the hero in way over his head…one is hard-pressed to represent the like properly within the paradigm of default PFRPG, to note one example.

This mythic path endeavors to change that. As per the default, the mythic path obviously covers 10 tiers and begins at 1st tier with one of 4 reluctant heroics. These abilities encompass being able to utilize evil or similarly restricted spells or abilities sans jeopardizing the alignment of the character (and offering the means to do so underhandedly), being a cynic and thus particularly resilient versus illusions and enchantments etc., mythic power-based flukes of luck that may bypass damage and prevent retaliatory damage and finally, mythic power-based inspire courage-like buffing. Regarding bonus hit points, we receive 4 per tier and regarding the mostly intended focus, the path works best with supporting characters, skill monkey, etc.

A total selection of 46 1st tier abilities are available for the player to choose from – these include counting natural 1s not as automatic failures, not provoking AoOs when drinking in combat, negating miss/concealment miss chances on critical hits…but what we get transcends this. Instead, the option to call in favors has repercussions when used in conjunction with Ultimate Campaign’s cool kingdom building rules. Similarly, rewards for delaying and exerting caution and the ability to have common sense (a very rare commodity among adventurers) makes sense. The reluctant heroes may wield non-mythic cursed items with the right ability. Gaining the option to follow up ally crits with assaults that ignore concealment and DR can be pretty nasty as far as I’m concerned.

The tier abilities also allow for the membership in multiple cavalier orders at once, switching order allegiance on the fly – there is some cool multiple personality-build/concept in this one… Providing skill rerolls to allies, not counting as a person for the purpose of being the recipient of buffs is nice as well as precise, in spite of the complexity. The traditional heirloom is represented by a legendary item and using mythic power to shake off negative conditions make sense. Similarly, I liked the ability to be an innocent bystander, liable to be ignored at first by adversaries and there is a somewhat stranger-like ability that lets you shroud yourself, making it hard for others to recognize you. Better aid and synergy with bardic performance and generally increased ability score enhancements makes similarly sense. Better marching prowess and the ability to quickly pick up what other people say round out a neat assortment of tricks.

Among the 3rd tier abilities, trap spotting and potentially disarming foes that crit you, retributive tricks and limited dual casting makes sense. Taking the negative conditions of allies upon yourself via mythic power is neat and the pdf also offers a crazy-prepared ability, though it does lack the “no specific items”-caveat I usually expect from these. Gaining bonuses when saving versus harmful emotion/fear effects, less ability drain/attribute reduction, there are some cool tricks here. I particularly loved the idea to tie a memento to a status/blood biography and mastery of hiding your identity and diving straight into obscurity fits the theme. Being superbly prepared regarding your abilities made me think of some of my all-time favorite anime (Code GEASS and Death Note, just fyi) and taking foes down with you is pretty gratifying. Using multiple lower level spell slots to cast higher level spells is a nice tweak of the spellcasting engine.

7 6th tier abilities are also included in this book, with touch and mythic power-based class ability mimicking, the options to be healed back up when you die as long as your body remains (blade of the immortal, anyone?) and immunity to insanity and confusion effects make sense. Oh, and tehre’s Roaring rampage of revenge, which combines vengeful outrage with quarry and immunity to various conditions…don’t cross the bride…or groom. Particularly since, enough mythic power provided, you may return to life. OUCH. Wringing allies from the brink of death and vowing revenge further add to the theme of the path. As a capstone ability, you basically get omni-evasion for everything with saves AND half duration and you may reroll 1s via mythic power.

Beyond that, the pdf does feature numerous suggestions for builds/concepts employing this mythic path.

Editing and formatting are excellent on a formal level, though, oddly, some abilities seem to have a slightly thicker font than others in all readers I tried. This remains a purely aesthetic hiccup, though. Layout adheres to Legendary Games’ 2-column full-color standard and the pdf sports numerous original full-color pieces of artwork, though fans of LG will recognize some of them. The pdf comes fully bookmarked for your convenience.

Jason Nelson and Tork Shaw deliver perhaps the mythic path I was always waiting for: The skill-focused path that covers a lot of the bases the trickster ought to have taken care of. The reluctant hero is an excellent option to complement most parties, but it, like the best of mythic paths, is also a great mechanical scavenging ground. Beyond that, though, it has another use: I tried the following: Reduce the point-buy by 5 for the character and/or make a PC with e.g. the commoner or expert class, locking that character into said class. Add this mythic path on the class and use it alongside other PCs using non-mythic classes. It actually works for a type of game that is more in line with several heroic narratives we’ve come to know from various pieces of fiction – more on playing commoners can be found in J.M. Perkins’ “Adequate Commoner“, just fyi.

You can get this great mythic path here on OBS!