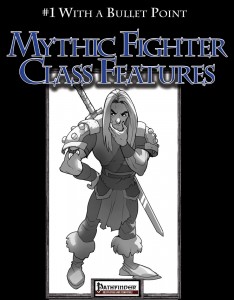 You know the drill – 3 pages, 1 page front cover, 1 page SRD, 1 page content, so let’s take a look at those Mythic class features for the fighter, shall we?

The Mythic Fighter can choose any of these class features as 1st level universal path ability provided they have the none-mythic version. So what are they?

-Mythic Armor Mastery: As a free action, when a spell, effect or attack would kill you, instead give armor or shield the broken condition. Now we’re talking! Awesome!

-Mythic Bravery: Never become frightened or panicked, instead become shaken. Also, foes failing to demoralize you or failing to hit you with a fear-inducing spell or effect allow you to use mythic power to counter-demoralize foes. Neato!

-Mythic Weapon Mastery: When attacking with a weapon and not dealing full damage (due to DR, incorporeal foes etc.) use mythic power as a free action to deal full damage. Bypassing non-mythic defensive abilities always works, mythic ones require a mythic tier-check.

Editing and formatting are top-notch, I didn’t notice any glitches. Layout adheres to a 3-column portrait standard, of which I’m not a big fan. the pdf has no bookmarks, but needs none at this length.

THIS is how a mythic-rules Bullet Point should be – all killer, no filler awesome iconic options that never feel bland or uninspired, instead offering the amped-up-to-11-versions of class features, glorious and awesome – final verdict: 5 stars + seal of approval.

You can get this cool little supplement here on OBS and here on d20pfsrd.com’s shop!