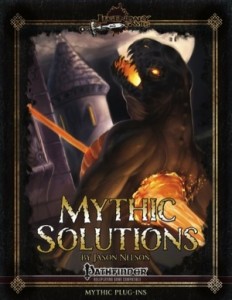 …but before we do, it’s confession-time. When the Mythic rules were originally released, I thought “Great idea, but it’ll be abandoned.” When I first read them, I thought “Cool ideas, but they just exacerbate the math-issues of high-level gameplay sooner – that’s numerical escalation with a few tweaks.” Then, I played the rules and my fears turned to reality. Enter Legendary Games. While by far not all pdfs released for mythic play have been well-received by yours truly, the majority has scored rather high and ultimately found me enjoying them…and mythic gameplay. Many of my bosses now get tiers, path abilities and the like, providing an adequate challenge for my savvy and exceedingly skilled players. I came to love this expanded, detailed mythic-rules cosmos and question my former judgment.

And then, there are the instances when I have to playtest mythic material. With the Mythic Adventures book only. Let’s just say…I HATE it. I know all those great tricks…and none of them work, because more than 90% of my mythic rules are by Legendary Games. Playtesting with the base book only feels horribly barebones, broken and bland. Still, even with LG’s massive array of material, the GM will encounter several phenomena that can render mythic gameplay problematic, courtesy, for the most part, of the base rules for the system – while some of these issues have been addressed (I’ll never play ANY mythic game sans Path of Villains, for example!), this book is about all those other solutions you may (or may not) require.

So, how do we start: Initiative, action economy and swift-action path abilities – the pdf provides concise and well-reasoned (and btw.: Mechanically sound) solutions to issues e.g. spawned by Amazing initiative, including a proper coverage of haste and e.g. titan’s bane. Most of the problems addressed here actually go beyond providing ONE solution – they provide multiple ones, which you could conceivably combine or cherry-pick!

The second big issue is that mythic power, much like spells and similar limited resources, does lend towards a nova-issue, but exacerbates this by being the most versatile such resource ever devised in a d20-based game. As such, going full-blown super, resting and then repeating may be too tempting even for consummate roleplayers, particularly since combat in mythic gameplay favors those that hit hard and fast – and yes, this pdf does provide an elegant fix here. Retroactive mythic surges can now also operate more in line with the diverse hero point-systems, granting a lesser bonus when used retroactively and thus rewarding (as opposed to penalizing) planning -and generating more excitement at the table.

The problem of stacking multipliers is also addressed…and the pdf does something I applaud it for: It recognizes BROKEN when it sees it. The foe-biting legendary item ability? BANNED. Thank you. Oh, and it does suggest alternate effects. Double thank you. No, seriously. Usually, authors only invoke Paizo-material to justify their material in a positive way (by pointing out how xyz is just as broken or worse…which is a logical fallacy…) – actually taking a undeniably broken piece and fixing it? Nice!

Fixes for Mythic Power Attack’s math, Mythic Vital Strike’s ambiguous wording…all appreciated. However, one rules that extremely speeds up any sort of game is simple, elegant and downright awesome: Cap on defensive buffs. The stacking of single ability focuses and thus, the breakdown of the math, is also addressed and mitigated as far as the rules-framework allows – including coverage of the single ability-focus-items and abilities, instead suggestion a scaling, much more elegant bonus.

Now the intent of mythic powers was to play demigods and powerful individuals right? Adventurers on steroids? The thing is…Hercules didn’t kill Nemean lions every day. The ease of refreshing mythic powers may, in some instances that want a high-powered, but not super-hero level of gameplay, actually cheapen the feats that are represented by mythic power – hence alternate rules for harder mythic power regains can be found within these pages as well, offering a whole different style of mythic gameplay. The many monster-defense ignoring tricks can also be nerfed down from flat mitigation (bad game design) to gradual mitigation that scales with your levels (good game design) and similar fixes are proposed for auto-conditions that can’t be saved against.

The massive issue of the “quadratic wizards, linear martials”-issue, exacerbated, nay, escalated by mythic rules, is also addressed. Now if all of these still do not save you from the discrepancy between offense and defense, if the PCs still manage to rocket-tag foes…well, then the pdf does feature special abilities in here to at least give their opposition a fighting chance.

Editing and formatting are top-notch. The pdf adheres to legendary Games’ 2-column full-color standard and the book sports numerous nice artworks in full-color. the pdf has no bookmarks, but you should print it out anyways and tape it into Mythic Adventures.

Damn, spoiler’d there, didn’t I? Jason Nelson’s mythic solutions are the single most required pdf any group utilizing mythic rules can buy. Period. This pdf should have been part of the original book. The design is cleaner and more concise, providing ways to deal with how some of the broken aspects of mythic gameplay can wreck your table. It is my firm belief, that, were this part of the default rules, more groups would be loving WotR. This is, pretty much, a non-optional survival kit, a true fix for some of the nastiest issues mythic gameplay provides…and even if you happen to like one of those broken components, the pdf doesn’t judge you for it and still has plenty of other fixes you WILL appreciate. In fact, even regarding non-mythic high-level gameplay, some fixes here can tremendously enrich your game and radically change the tone of your PFRPG-game. (*Cough* buff-limit */cough*)

This book, in fact, is in my opinion just as crucial to mythic gameplay as the core book (and a healthy dose of LG-books) – this is the non-optional fix for the issues, a superb little pdf…and for mythic games, definitely essential and non-optional. Hence, my final verdict will clock in at 5 stars + seal of approval and I will also add my EZG Essential-tag to this book. It makes mythic gameplay so much more rewarding, you’ll never want to miss this gem.

This must-have pdf can be bought here on OBS and here on d20pfsrd.com’s shop!