Lucien’s Guide to the Black Files 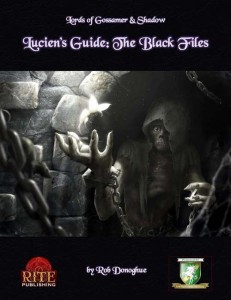 If you read this review, one of the following is true:

2. I have shared this information with you – don’t screw this up!

3.You have stolen this homepage – I have been notified of your identity and location.

4. You have killed me. Good for you, but you have eliminated the ward that left a whole bunch of nastiness in check.

5. I have died and you took up my mantle – good for you, but I hope I’ve had the chance to provide the keys, because I wasn’t joking in 4.

This intro mirrors (in less vivid prose) how this guide begins – to give you an inkling of the level of quality of the writing. The pdf clocks in at 14 pages, 1 page front cover, 1 page editorial, 12 pages of raw content, so what is contained in these pages?

This pdf blasts off with a rant that actually had me laugh – on the nature of scholarship and misidentifying artifact and relics as Typhonian – only to provide what can only be called a cornucopia of diverse theories regarding the nature of Typhonians – as in the best of LoGaS-supplements, the content herein is all about potential – the theories are provided with cues to what is or may be true, but no universal monolithic truth is prescribed – we receive ideas: How the Typhonians and the grand stair interact, for example. What actually constitutes a Typhonian as to opposed what makes one an Echidnan – the added diversity makes for a truly compelling addition to the lore.

The second file contains information on a civilization kind of lost – the Ildari. A vast star-spanning empire that has been subject to a cataclysm, much like Warhammer 40 K’s empire, it still looms strong, if not as powerful as before – having mastered space travel, the Ildari may make for a cool addition to one’s world, especially since the Grand Stair as an alternative (including the opposition that uses it) may very well see a massive conflict brewing…awesome! Especially since proper mechanics for Ildari supplement the information provided -secret realms, arrays and cosmos make for great additions for the DM to weave stories around!

The third file kicks off with an amusing rant on the cliché of an evil overlord who called himself “Harbinger” – alas, the irreverent tone of the narrator is only half justified – unlike many similar pseudo-villains that think they’re big shots until a Gossamer Lord/Lady puts them in their place, this guy actually had a very powerful patron – an entity called Matekai. This entity gobbles up world. Yes. And the irreverent tone might be justified, but on the other hand, this creature may be a Typhonian…or something completely different.

Speaking of different (and to me, profoundly frightening) – Basta. A plant that controls the biome of its whole world, the size of a town, which must have consumed an entity of significant power, receiving impossible knowledge. Worse, its strange psychology makes for a difficult decision on whether it is benign or simply amoral…and it’s rooting on other planets…. *shudders*

The modification Basta-controlled for worlds and attributes for lesser and greater basta are provided.

A total of 4 diverse mini-hooks of outstanding Black Files are also provided before we’re introduced to the Black Office -and the caretaker of the files, one lady Kitabu, fully portrayed in all her glory as an NPC servant of Lucien.

Editing and formatting are top-notch, I noticed no glitches. Layout adheres to Rite Publishing’s two-column full-color standard for LoGaS and the pdf comes studded with GLORIOUS full-color artwork of the highest quality. The pdf comes fully bookmarked for your convenience.

It is, in one word, ASTOUNDING how many awesome ideas Rob Donoghue has managed to cram into these pages – the content herein is universally inspiring, top-notch, and each and every Black File quoted herein can fuel an adventure, perhaps even a campaign. This book is one brilliant, superb supplement full of awesome ideas and should be considered not only a great buy for LoGaS-fans, but also for any DMs looking for inspiration (or simply a good read!) beyond what one usually receives in pdfs.

You can get this damn fine supplement here on OBS and here on d20pfsrd.com’s shop!