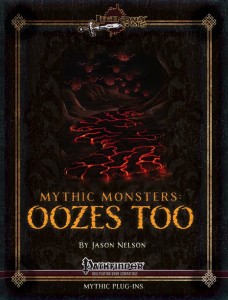 This installment of Legendary Games’ Mythic Monsters-series is 32 pages long, 1 page front cover, 1 page editorial, 1 page ToC, 1 page SRD, 3 pages of introduction, 2 pages of advertisement and 1 page back cover, leaving us with 22 pages of raw content, so what do we exactly get here?

We’re back with more mythic slimes – and a new array of beginning material, this time the 3rd-tier archmage ability oozechemist that nets you the bottled ooze discovery (not only when you’re an alchemist) and power these oozes, turning them mythic. Nice one. We also get 6 variants of summon slime spells for level 1-6, which per se are cool…though the list at the end, with nary 20 entries, takes up half a page – feels a bit bloaty here layout-wise – half a page couple of names,, 1/3 of a column mythic spell-info for these, then the rest of the page is blank. Not a good use of page-count in my book.

Alright, so let’s get into the oozes (though not literally – I don’t want my audience to dissolve…get it? All right, 2 bucks into the bad pun jar…) – we kick off with the CR 2/MR 1 Giant Amoeba and amoeba swarm. The former exposes those rupturing its membrane to filth fever, while the second may actually fuse into a mythic giant amoeba as an alternate form – interesting. Now next would be the Mythic Brain Ooze at CR 9/MR 3, whose pulse may actually deal int-damage and they also get quite a nice array of SLs. Pity that pulse and aura of the base creature get no mythic, improved version though – to me, both could have made for a nice upgrade potential.

Mythic Brown Puddings clock in at CR 8/MR 3 can create AoE-suctions in water and also foul water – now if that wouldn’t make for an interesting story in a desert environment… Now on the high-level scale, the mythic carnivorous crystal is beautiful – and deadly at CR 14/MR 5. Waves that transform metal into brittle crystal, ray refraction and the option to encase foes in razor sharp cages of shards make for one massive threat. Better yet – that’s not all, this beast can do to your players. The cindersmoke ooze at CR 10/MR 4 is essentially a poison-gas-themed magma ooze – the new abilities are cool, but it should be noted that not all abilities refer to the new creature correctly as cindersmoke ooze – nothing serious, but still something that could have been easily remedied.

At CR 5/MR 2, the crystal ooze becomes particularly corrosive and make incite a contagious, petrifying effect working somewhat like a poison – nice imagery here. The CR 9/MR 3 Dun Pudding can duplicate the shifting sand-spell and is rather efficient at destroying items – with its burrow speed an interesting threat to settlements etc. The CR 5/MR 2 Frost Cube with its non-lethal cold-spores makes for an interesting cross between gelatinous cubes and molds. Speaking of variants – what about the sorcerous, intelligent CR 13/MR 5 sorcerous cube and its engulfing mend meld/slime command… makes for some interesting options. After all, who expects the slime to actually do something smart? Especially if the respective cube can just suspend magic items and activate them…nice action-economy wise and potentially really nasty. For lower levels, CR 3/MR 1 garden oozes can spew slippery sludge that creates difficult terrain and emit sickening gases.

Want an epic threat? What about a CR 20/MR 8 Mythic Plasma Ooze that can emit focused plasma beams, magnetic pulses for attraction and repulsion and deliver terrible death to all that stand it its path. Very cool! The final slime once again is new and unique and comes with a gorgeous 1-page artwork – the sonic clime at CR 12/MR 5…is innovative and truly worthy of legendary games – it can fly, is incorporeal and creates an aura of deafening, nauseating sonics. Much better – it can combine drag and trample via mythic power (Doppler-drag, baby!) – the latter of which can also be used to mythically shatter of sympathetic vibrate things asunder. Have I mentioned their aura that disrupts and potentially absorbs spellcasting or their truly devastating charge attacks? Once again, a thoroughly superb creature!

Editing and formatting are rather good, though once again, a creature is missing the ecology-part of the statblock and I noticed a couple of instances where e.g. italicization of spells was forgotten. The pdf comes with hyperlinks, but no bookmarks, which constitutes a comfort detriment in my book. The pdf adheres to a two-column full-color standard and the two pieces of original artworks are awesome.

So here’s the second ooze-book and Jason Nelson does it again and manages to create even more unique, cool abilities for oozes that set them apart, make them unique and superior, abilities that the base creatures should have had. Add to that the superb new creature and we have a good pdf on our hands. Hell, even the variants of e.g. the cubes make get unique, cool options – to the point where boring base creature mini-templates actually get their own distinct identity. That being said, the additional material isn’t that strong here and when compared to the first oozes book, I couldn’t help but feel that not all of the creatures herein lived up fully (!) to their slithering, death-dealing potential. All in all, this installment of Mythic Monsters is fun, offers cool critters and should be considered a good buy, but e.g. the carnivorous crystal and the new creature do showcase the full potential of the line, the pinnacle not each of these critters reach. Hence, my final verdict will clock in at a heartfelt recommendation of 4 stars, also for non-mythic-DMs who want to scavenge some abilities to make oozes more exciting in their respective games.

Youc an get these slithering death-dealers here on OBS and here on d20pfsrd.com’s shop.