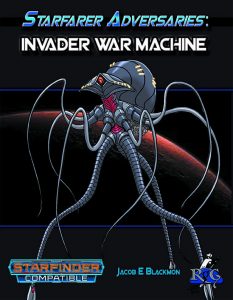 This installment of the Starfarer Adversaries-series clocks in at 7 pages, 1 page front cover, 1 page editorial, 1 page SRD, 1 page advertisement, leaving us with 3 pages of content, so let’s take a look!

Okay, so first thing – the invaders are not classified or codified, leaving them a mystery for the GM, which is a nice plus. It should also be noted that the builds make use of material from Starfarer’s Companion, but, as a huge plus, don’t require the use of the book – the special ability of the war machines referencing a spell has all relevant effects stated.

The invader war-machines within come in three classes: At CR 6, at CR 10 and at CR 14. From low to high CR, we have the scout-class, the assault class and the destroyer class. The builds use the combatant array. The war machines are technological constructs, and the latter two have a special ability invested to increase their saves by +1. The destroyer class’s base kick attack is off by 1 unless I’m sorely mistaken; it should be +25. The machines also seem to have counted Perception as a good skill granted by the array, when Perception is bestowed *generally* as a free good skill; consider that these are machines, I can get behind the choice to make the skill count towards the skill maximum here. I am a bit puzzled that all of the war machine’s attacks use the low attack column’s value as a base, though. Multiattack options have been properly implemented.

On a nice side, the critters do include unique signature abilities, namely the option to grab targets and stuff them into a prisoner cage – escape from these is properly noted (though “full-round” as a duration for attempted checks should probably instead refer to “full action”); prisoners may be used by the war machines as a kind of living battery, affecting them with vampiric touch – this would be aforementioned spell, and the effects, namely negative energy damage and healing of the war machines, are covered properly. The destroyer class war machine also emits toxic clouds as a reaction, which can nauseate those nearby when they have consumed 4 CR or more. This can be a tad bit wonky. Nice: A Small sidebar provides some suggestions for default prisoners.

It should be noted that the artwork comes in a one-page, handout-style version – neat!

Editing and formatting are good, bordering on very good on a formal and rules-language level. Layout adheres to a two-column full-color standard, and the pdf has a kickass, original piece of artwork. The pdf has no bookmarks, but needs none at this length.

Jacob E. Blackmon shows that he can not only draw cool artworks, he can also design some nice critters. The invader war machines are interesting and solid – not exactly world-shaking, sure, but they are fun and a nice addition if you need some nasty technological harvesters for your Mass Effect style invasion or similar storylines. Considering the low and fair price-point, I consider this to be worth checking out. My final verdict will clock in at 3.5 stars, rounded down.

You can get these inexpensive war machines here on OBS!

You can directly support the creation of more roleplaying reviews by joining my patreon here or by leaving a direct donation. Every bit helps!