Book of Beyond Subscription (Patreon Request)

Book of Beyond Subscription 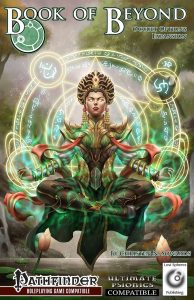 Okay, so, now that I’ve finished covering the entirety of the Book of Beyond series at the request of my patreon supporters, let’s talk about the subscription/bundle offering as a whole. If you want to see detailed reviews of the components, check out the individual reviews – if you click on the “Book of Beyond”-tag on my homepage (or search for it, you’ll have them all conveniently listed.

The greatest weakness of the series, as a whole, is that it mainly suffers from its editing not being as precise as it’d deserve to be; there are a lot of little niggles to complain about, and yes, there are a few options herein that imho go too far regarding power-levels.

That being said, Christen N. Sowards’ massive Book of Beyond series is genuinely much better than I expected from the small indie outfit that is Lost Spheres Publishing. He has not only grown as an author here, he has retained a core strength of his designs: Never be boring.

The Book of Beyond series manages to tickle out a lot of new and innovative concepts out of good ole’ Pathfinder’s first edition, and it genuinely displays a love for third party content, for subsystems.

And, of course, there is the question of bang for buck. You get two really creative, high-concept mythic paths, a ton of cool occult and psionic material, and then there is the massive luminal power book, which is itself chock-full with creative and experimental options; not all of these may be for every game, but for those looking for something creative, such as the Liminal Gestalt-lite engine? Heck, you will grin from ear to ear.

I won’t be using the entirety of this series in a given game, but I sure as hell will continue using content from this series. In fact, in spite of the massive amount of work that analyzing this was, I found myself genuinely enjoying my time spent analyzing this.

If you and your group consider yourself to be veterans of Pathfinder’s first edition, do yourself a favor and check this out – it may be rough around the edges, but it genuinely rewards you for sticking with it. In spite of my OCD-frustration with the editing snafus and glitches, I found myself looking forward to returning to this series time and again, and each of the books sports several components I sure as hell will be using. And yes, this series requires that a GM be capable of assessing the power of individual options in the context of their game – as noted, many options herein reveal their full potential in the hands of capable players.

So yeah, this is rough; it’s not perfect, but I have always preferred ambition and innovation over formally perfect, but safe and boring files. As such, my final verdict for the entire series will be 4.5 stars, rounded up for the purpose of this platform.

You can get this massive amount of content here on OBS!