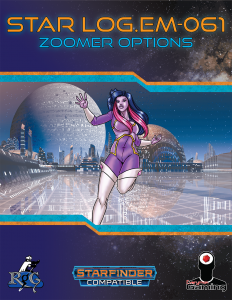 This being an expansion for the Zoomer base class, I obviously assume familiarity with the class in this review.

After a brief bit of contextualizing the zoomer, we dive right in with new zoomer stunts. The pdf presents 8 different ones that may be taken at 2nd level. The first one is already pretty interesting in its execution – it halves the time required to take 20, and allows you to execute skill checks that require 2+ rounds in half the time. This may not sound like much, but it can mean the difference between death and survival. Extra kudos: The stunt accounts for social skills – since they are contingent on talking and not supernaturally quick thinking, these are exempt.  Agile charge allows you to charge through difficult terrain, and also makes the target of your charge lose eligibility to an AoO when you charge it.

Broken Delay is anything but – it is a genuinely cool trick that’ll make the zoomer feel more novel: When you delay, you may do so at any point during your turn, even after taking actions. If you come out of delay, you only have the remaining actions upon going into delay. This is kept in check by requiring a rest of Resolve Point expenditure to use it again. This one imho warrants getting the pdf all on its own. Devastating momentum adds ½ class level to the damage output of your small arms or operative weapons when using a move action or charging as a full action. When firing a weapon in a vehicle chase, you roll twice and use the better result, providing the vehicle moved its speed or more. Cool! Fast fingers lets you grab or retrieve unattended or stowed/stored items as a swift action. You can’t do so if it would usually require a standard action or more, and it requires having the Quick Draw feat nice. (As an aside: There is a stunt that, bingo, nets you Quick Draw.)

Lock and load lets you reload a small arms or melee weapon with the operative and powered special properties as part of moving your speed – once more, you can’t do so if this would take longer than a standard action. Smooth piloting reduces your vessel-based Piloting penalty if moving at full speed; and yes, this has star ship relevant repercussions accounted for as well!

At 8th level, we have 7 more stunts for the zoomer: Confounding speed. When you move at least 10 feet and attack a target, the opponent must succeed on a Perception check; on a failure, they become flat-footed against all of the zoomer’s attacks until next turn. This also has extra benefits for vehicles and star ships! Now, as a minor nitpick, the stunt does not specify a DC here, which means you default to the default DCs – this is not bad, mind you, as the DCs are pretty sensible and reflect well the intention of the stunt, but explicitly stating such would have prevented less rules-savvy individuals being puzzled there for a second – to make that clear, this does not make you invisible or anything, but it makes skirmishing much more viable..

Gust lets you leave a blast of water or wind in your wake when charging , running or withdrawing – this can render targets prone or off-kilter (in zero-G) on a failed Reflex save. The stunt costs 1 Resolve Point, and being extraordinary, does not conjure forth water or air, as such being contingent on environmental factors. Maneuvering charge lets you combo charges with a maneuver chosen via Improved Combat Maneuver, and it has grapple synergy, which is nice. Minor nitpick: This should specify that it has Improved Combat Maneuver as a prerequisite, otherwise it doesn’t do jack RAW. A synergy with the racing attack class feature would have been prudent here as well, as that one doesn’t require the feat. Reactive dodge lets you use your reaction for a +4 dodge bonus to AC, but renders you off-target. Nice. Run for cover is not only one of my favorite Project Pitchfork tracks, it also allows you to move zoom dash distance as a reaction to move out of AoE effects, which is great – however, you better know your distances, for if you still end up in it, you incur a penalty to Reflex saves. I love this, as it emphasizes PLAYER skill over character skill. Parquor has rules for charging through blocked or movement slowing places and creatures – cool!

Temporal recall requires a rest and Resolve expenditure to use again, but oh boy. It lets you chronically affix your position and condition, and then, for 3 rounds, you may recall that state as a reaction. This is very strong, but also absolutely brilliant and super-exciting regarding what you can do with it. Love it!

The pdf also offers 4 stunts that are unlocked at level 14 for the taking: Accelerated analysis lets you either roll a d20 twice and take the higher result, or reroll a check, depending on whether you pay the Resolve cost before or after you roll. Love it! (And yep, this requires accelerated acumen.) Bamboozling speed builds on confounding speed and makes it apply to all targets threatened during movement, which is brutal, but also very much iconic. Blinding speed also builds on confounding speed and requires 1 Resolve Point to use, but adds the insult of being blinded to the injury of being flat-footed or off-kilter. It also explicitly allows you to hide in conjunction with the stunt – and yep, at this level, this type of stratagem is well-placed. Splintered time, finally, expands the iconic broken delay ability mentioned before. This one lets you spend Resolve Points when coming out of delay to regain actions – the costs are steep and a bit nova-y, but the tricks you can pull off with this? Oh yeah!

Editing and formatting are top-notch on a formal and rules-language level – apart from one talent not listing an obvious prerequisite as a courtesy to players with limited system mastery, I am bereft of stuff to truly complain about. Layout adheres to the series’ two-column full-color standard, and the pdf comes with a nice artwork. The pdf has no bookmarks, but needs none at this point.

David N. Ross doesn’t hit one homerun, to speak in a baseball-metaphor, but a whole series of them as far as I’m concerned. This is a true must-own supplement for anyone wishing to play a speedster class. The potent, but sensible options for the zoomer class ooze awesomeness on every turn; from emphasizing player agenda to actually presenting meaningful skirmishing tricks and means to influence action economy, this humble pdf exemplifies how damn awesome a small expansion for a class can potentially be. I liked the zoomer before – now, I love it. 5 stars, seal of approval, and this is a candidate for my Top Ten of 2019. Seriously, if you’ve been on the fence about the zoomer before, get the class, get this pdf, and start grinning. This is absolutely inspired!

Missed the base class? You can find it here!

If you’re enjoying my reviews, please consider leaving a tip via direct donation or by supporting my patreon here – they directly determine how much time I can spend on reviewing.