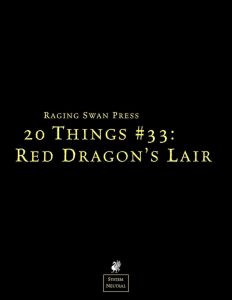 This installment of Raging Swan Press‘ much-beloved dressing-series clocks in at 11 pages, 1 page front cover, 1 page editorial/ToC, 2 pages of advertisement, 1 page SRD, 1 page back cover, leaving us with 5 pages of content, so let’s take a look!

Okay, we begin the first page with 12 sample features for a red dragon’s lair – these include billowing clouds of scalding steam, partially melted walls, and splintered and scorched bone piles. Odd: The glitch from the white dragon installment is replicated in a different entry here: Entry #5 states “As #5, but the…” – that should be “As #4…” Black rock shot through with livid, hot veins and 8 names for male dragons and 8 for female dragons complement the first page. Kudos where kudos are due – not one of these entries is generic, all have a distinct red dragon theme.

The second page contains 12 minor features of dressing for the dragon’s lair: Interesting here: Giants corpses LACKING fire damage (what does that mean?), soot and flakes of ash littering the area fissures in broken walls, and trophies (giant and draconic skulls) add a sense of serious unease here. 8 distinguishing marks setting the dragon apart are provided – including eyes that literally burn with avarice, pockmarked wings full of holes, swept-back horns atop a sinuous neck – some nice ones. I’d have liked to see a slightly stronger emphasis on red dragons, but the write-up does include descriptions that are in line with several iconic red dragon renditions over the years.

A list of 12 sample sights and sounds may be added to enhance the atmosphere of the dragon’s lair – these include a few different kinds of startling roars, jets of harmless steam, clouds of soot twirling and fake dragon’s eyes shimmering in the dark. The malign nature of the violent red masterminds is well-served here. An entry of 8 things the dragon may be currently doing can be found here. These include sorting through treasure, roasting human corpses slowly on a spear (cool!) or scratching itself. I’d have liked to see more red-specific entries, as e.g., the one where the dragon scratches itself with a wall is one I’ve seen before – and one I don’t consider too suitable for reds.

The pdf features a pretty massive 20-entry treasure and trinket selection, which includes a giant-sized two-handed sword, blobs of precious metals molten together, raven-shaped brooches of obsidian and the like. Carvings of cresting waves and birds wheeling atop a sail ship, though, seemed rather odd and misplaced to me, though that may be an intentional attempt to go against the cliché. A couple of these entries could have used a stronger tie-in to the red dragon as far as I’m concerned.  As before, the pdf provides a table of 8 entries that sport specific dressing habits – these are pretty darn cool this time around, and include the dragon having bathed in molten gold, signet rings speaking of noble champions long ago vanquished and a missing eye replaced with a gleaming blue gem – really cool entries here!

The final page is devoted to a total of 20 entries of hoard dressing, including moldering remains that would be more suitable for black or green dragons. Burned flesh in cages struck me as more sensible here. While this is a strong table per se with some cool ideas, its focus is more generic than I’d have liked to see here – many of these entries could work for any dragon, not just reds.

Editing and formatting re very good. Layout adheres to Raging Swan press’ elegant two-column b/w-standard, with solid b/w-artworks included. The pdf comes fully bookmarked for your convenience, and, as always, the supplement features two versions – one intended to be printed out, and one for screen-use.

Creighton Broadhurst’s dressing for red dragons is imho slightly superior to the white dragon entry – it manages to evoke a stronger sense of identity for the reds, but at the same time, I couldn’t help but feel like there could have been a stronger tie-in with the nature of evil sovereigns and the quintessential master of flame here. This is a good dressing file well worth the asking price, but doesn’t quite reach the level where I’d adjust my rating – this is also a 4 star dressing file.

Enjoying my reviews? You can directly determine how much time I can dedicate to reviewing by leaving a tip via direct donation or by supporting my patreon here!