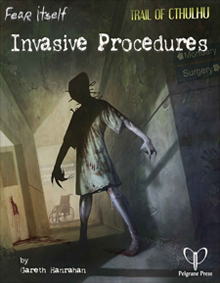 This adventure for Fear Itself clocks in at 86 pages if you take away the editorial, ToC, etc., and the module was written for the first edition of the Fear Itself game. The adventure comes with rudimentary conversion notes for Trail of Cthulhu. It should be noted that my review is based on the softcover version of the supplement – I do not own the electronic iteration of the supplement. If you’re playing this module in conjunction with Fear Itself’s second edition, expect to do some conversion work, as this adventure obviously has medical themes, and 2nd edition provides some expansion there. If none of the PCs have such skills, this obviously is not an issue.

The module comes with 5 pregens, which work well in conjunction with the module, but unlike many GUMSHOE-scenarios, the adventure works actually very well when used within the frame of an ongoing campaign – it works rather well with characters other than the pregens. A slight bummer: We do not receive any cartography – personally, I suggest getting some hospital floor plans and/or merging the Silent Hill-series’ hospital plans for the purpose of the like.

All right, this is as far as I can go without diving into any SPOILERS. Potential players should jump ahead to the conclusion.

All right, only GMs around? Great! This module take’s place with the PCs recuperating from a serious injury of some sorts in the old and somewhat remote “Our Lady’s Hospital” – should the characters be agents of e.g. OV, the presence of Dr. Clifford Drake, a world-renowned surgeon, makes for a great reason for them to be in this particular hospital.

How to handle flashbacks of being injured and the like is properly explained, and indeed, the module does an EXCELLENT job regarding its premise – as badly wounded as they are, getting out of bed costs the PCs one Health Point; similarly, stressful activity imposes the same tax. A full rest replenishes 4 Health, while an interrupted night only provides 2 Health Points. The hospital staff, fully detailed, is kind – though the module wastes no time: A patient breaks into the PC’s room – obviously mad, babbling and attacking the PCs, babbling about in German, for example, missing testicles. While the madman is retrained, the staff thereafter is properly apologetic. All seems as well as the initial shock may make it.

The module takes its time, building up a sense of anxiety, with the next day providing consultation, and the means to notice that the German lecturer from the previous night, Gavin Langley, seems to have met a nasty fate…provided the PCs are smart. If they botch this, then no problem – the module cranks up the tension in the next night.

You see, at night, the hospital turns into a Silent Hill-ish hellscape, with none other than the Practice in charge. What’s that? Think of them as Anti-Hippocrates doctors, morticians and nurses, transcendent beyond the confines of mortal life, turned into Outer Dark entities. PCs are overpowered, and dragged towards a painfully, horrible operation – this turns one character into someone with both sets of reproductive organs, internally, and there is a scar on the forehead…while another is missing an eye. Indeed, the Practice has turned on PC into The Eye. The scar on the forehead hides a not-yet-healed third eye that allows the user to see auras…but that will only slowly become apparent.

The hospital’s conveniently cut off from the rest of the world, with the somewhat grotesque porter as a strange foil for particularly clever PCs. Still, the daylight hospital is an example of almost painful normalcy as the PCs, probably increasingly panicked, proceed with their investigation. A second nightly operation will remove finger-bones from one character, replacing them with plastic, while creating a second, grotesquery, the Hand. This PC will be capable of using a limited (and painful) telekinesis. The visit of the Hospital’s overseer provides no respite – but at night and day, the PCs have hopefully at this point put the clues together.

You see, Dr. Drake has had a troubled career: Brilliant, but troubled, his career flatlined, hardcore, due to his erratic mood-swings. Dr. Drake is suffering from a split personality, with his more psychotic personality hell-bent on joining the Practice – the means to do so extracted with the help of the by-now dead German lecturer. The task of the Riddle of Flesh is complex: In one PC, there is a bezoar-like tumorous growth – this growth contains the key that provides the sole means for the PCs to escape the hellish version of the hospital at night. Drake will confront them, or they will find him – but here, we have another great thing: You see, while Drake was tainted and abused by the Practice, he’s the best chance of the PCs to retrieve the bezoar: The PCs will need to use the Eye to see the bezoar, the Hand to extract it. And yes, this can be very lethal to the poor sod with the bezoar. Drake is the PC’s best shot to perform the operation – while his regular persona is in command.

Escaping together  is the best course here; for, to become a member of the Practice, Drake must die. If the PCs kill him, they actually transform him, and get a truly nightmarish and dangerous final confrontation with the ascended Drake – and of course, there’d be the issue of having earned the enmity of the Practice’s potent members…

The book does reprint the whole entry on the Practice from the Book of Unremitting Horror, just fyi.

Editing and formatting re very good on a formal and rules-language level. Layout adheres to the series’ two-column b/w-standard, with a couple of really awesome b/w-pieces included. The book has no maps, which is a comfort-downside, as far as I’m concerned. I can’t comment on electronic features, but the softcover book is nice.

Gareth Ryder-Hanrahan provides a genuinely awesome and truly creepy horror-adventure here. From body horror to a sense of reality breaking down, “Invasive Procedures” hits all the right spots. The NPC-cadre is nuanced, the investigation streamlined, yet challenging, and the resource-management game of Health adds further tension to the adventure. In short: This hits all the right spots.

This is creative, genuinely frightening and an all-out successful adventure that made me wish the author had written more Fear Itself and Esoterrorists material. My final verdict will be 5 stars + seal of approval.

You can get this effective, horrifying and visceral scenario here on OBS!

Enjoying my reviews? please consider leaving a tip via direct donation or by supporting my patreon here!