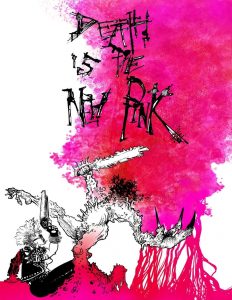 This review was moved up in my reviewing queue at the request of one of my patreon supporters.

Okay, so what is this? On a mechanical level, this is basically a post-apocalyptic hack of “Into the Odd”; in themes, this is very much inspired by Borderlands, Tank Girl, etc. – which you can also confirm in the Appendix N, which also lists Dredd and the music of KMFDM. The latter got, obviously, some serious cheers from me! So, to make this abundantly clear from the start – this is NOT a generic post-apocalypse toolkit. If you want something like The Walking Dead, The Road or a similar down-to-earth, somber game, this is not what you’re looking for. Its themes and terms employed for levels, characters, etc. clashes with these premises, and it does not have e.g. Vs. The Wasteland’s enormous customizing potential. If you’re looking for gonzo post-apocalypse? Well, then you’ve come to the right place! “Into the Odd” as a chassis means that the rules are pretty different from most retro-clones, using three attributes instead of 6, and electing for an even more rules-lite approach, just fyi.

Anyhow, this review is based on both the PoD-version and the pdf. While the pink, which is used as a third-color throughout, is really vibrant, the PoD version uses a more subdued tone of pink. Personally, I do prefer the pdf’s almost neon color, but that’s a matter of personal taste. It should be noted that, if the cover wasn’t ample clue, this is very much a game for a grimy post-apocalypse: Player characters are called meat bags, and there is plenty of cursing to be found within. If you are sensitive to that type of thing, then consider this to be your warning.

Anyhow, how does the game work? You roll 3d6 thrice, once for each Ability (score), and you can switch two of them. The abilities are Badassery (BAD), which denotes fighting. Fortitude, intimidation, etc.; Dodging Some Shit (DSS), which includes athletics, acrobatics, etc. and Moxy (MOXY), which is the catch-all ability for confidence, psychic powers, discipline and charisma. Additionally, you roll 1d6 for your Hit Points. Then, like in Into the Odd, you consult a massive table for starter packages. This will net you a weapon, an item, a characteristic, and either a Muscle UP! or a Doodad. Every character gets a flashlight, camping equipment, matches, a flare and rations, as well as 2d100+25 GB (gold bits).

Starter packages constitute one of the things that really impressed me about “Into the Odd” – the higher your ability scores and Hit Points, the worse were the tools you got; while this game follows a similar paradigm, I don’t think the balance is as tight as in “Into the Odd” here – having e.g. a deathwish is pretty much hard-coded into the game; throughout the book, you find a ton of references that basically state that existential ennui is one of the driving factors for meat bags to go adventuring – seeking a badass end. So yeah, while the game works well, the starter package table isn’t as cleverly constructed as in “into the Odd.”

Values for miscellaneous items and hirelings can be found. The game knows 6 different levels – you gain level ups when you complete a number of trips to the wasteland, with 3rd and 5th level providing a Muscle UP! ability. 4th level nets you a cohort, a sniveling meatbag. Muscle UP!s fyi include damage increases, the ability to keep attacking after killing a target (old-school fighter, anyone?), the ability to actually understand machines and the like. Each level  also lets the meat bag roll 1d6 and add it to their Hit Points, and roll 1d20 for each ability score: If the d20-roll is higher than the ability score, it increases by 1. As noted before, MOXY governs psychic powers, and if you gain psychic powers, you can generate fields of silence, use telekinesis, etc.

Exposure to weird stuff in the wastes can result in mutations, with the GM deciding whether they have a game benefit or not; each mutation reduces MOXY by 1d4, and at 0 MOXY, you become mindless.

Mechanically, the game is superior in one crucial aspect that immediately jumped out to me in comparison to “into the Odd” – we do actually get proper initiative rules, which are based on a simple DSS-test. A test is btw. a d20-roll under, with a 1 an automatic success, a 20 an automatic failure. On each of your turns, you get to move and perform an action such as attack. Difficult tasks/actions require a save: Roll under the associated ability score. Simple, elegant, easy to grasp.

As far as damage is concerned, damage is first subtracted from Hit Points, then from BAD. Upon BAD reaching 0, you die. If you take BAD damage, you have to make a BAD-save or take critical damage; if no one comes to help the meat bag, they die in one hour. DSS reduced to 0 equals being paralyzed. If a meat bag dies, the next character gets a Luck point, which may be used to change a failed save into a successful one. Reaction tolls are based on the instigating character’s MOXY, and morale tests similarly are based on MOXY.

Sometimes, luck is all there is to it – 4-6 on a d6 mean that the players are favored, 1-3 that the opposition (which is collectively known as “nefarios” in the game’s parlance) is favored. Doodads are grouped in two classes – regular and powerful doodads, and they basically represent pre-cataclysm tech and weird/powerful items – they are basically the equivalent of “Into the Odd”’s  Arcana, but generally tend to be a bit more subdued due to their nonmagical nature. These include bombs that make targets vomit forth ridiculous amounts of acidic sludge, spiked collars that let you enslave targets, etc.

The pdf does include 5 different radiation levels, vehicle rules and hazards that include “melting face sludge”, auto-turrets and the like.

The book also contains a bestiary that is rather enjoyable – monsters are properly statted, come with some inspiring flavor, and a DRIVE, which is intended to represent, bingo, their main driving force to do what they’re doing. Here, the butcher may be found alongside bombing slugs (which approach and explode) and the chicken bear; there is a nasty quasi-undead psychic emaciated lady, 4-armed gorilla-things (yep, girallons), so-called “Fuck You Worms” obviously inspired by Tremors, and old-school Fallout fans will realize that “Mother Puss Bucket” is an obvious homage to good ole’ isometric Fallout. Mutants, killer robots and killer cows can be found alongside xam xams. Those would be fist-sized acid-spitting flies. EW.

The sample background setting Scratchtown is a pretty grimy place, with sample tables  for 2d12 sample people and a quick, basic quest-generator providing some immediate use. Beneath Scratchtown, there lie the catacombs, and beyond the wastes, the book also mentions things far away, like the “Oshan” – whatever that’s supposed to be. 😉

The final section of the book deals with two sample adventures, the first of which represents a trip through the catacombs; structurally, this is basically a point-crawl that employs terse, brief notes for the general theme of the keyed locales, followed by an italicized description. Hazards and the like are underlines – as a whole, this renders the module pretty easy to run, and the adventure does come with an abstract map, though no player-friendly version. It is not possible to discern room dimensions from the map, so if you prefer to provide the like in VTT or other playing experiences, that’s something to bear in mind – this is strictly theater of the mind. Over all, I wasn’t too impressed by this one – it’s easy to run, but it feels like pretty much the “vanilla” experience for what this game and its far-out theme offers.

The second adventure is more of a regional overview of the area surrounding Scratchtown, with random encounter tables and some ideas to further develop. I enjoyed this one.

Editing and formatting are very good on both a formal and rules-language level. Layout adheres, for the most part, to a one-column b/w-standard, which, like the artworks, uses pink as a highlight. The cartography operates under the same premise. The pdf, gratingly, does not have bookmarks, making navigation a colossal pain. For that, you should detract at least half a star from the pdf-version.

Mike Evans’ twist on the “Into the Odd”-rules is elegant, well-executed, and sports this interesting “no fucks given”-attitude; while, personally, I could have done with a bit less swearing in favor of more efficient swearing, this book manages to evoke a “life is cheap”-aesthetic of quick and fun beer and pretzels gaming. Clearly intended for fast and simple fun, this book represents, on a design-level, for the most part an improvement in precision and detail over the original game. At the same time, both starter packages and sample adventure did not hold up as perfectly as the components in “Into the Odd.” That being said, from a purely mechanical perspective, this is the superior game. If you’re looking for an easy to grasp, very grimy type of post-apocalyptic game that doesn’t focus on survival, but more on punk/industrial/metal aesthetics, then give this a try! My final verdict for the softcover print version, which btw. does have the title on the spine, will be 5 stars; for the electronic version, detract a star for the lack of bookmarks; this is the core-game; it should be easy to navigate.

You can get this rules-lite metal post-apocalypse here on OBS!

Missed Into the Odd? You can find it here!

Want another rules-lite take on post-apocalypse that can account for more playstyles? You can find the excellent Vs. The Wasteland here!

Do you enjoy my reviews? If you do, please consider leaving a direct donation or supporting my patreon here!