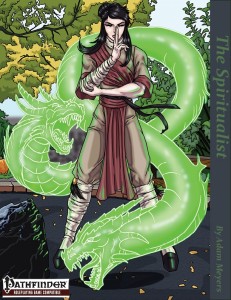 After a short piece of prose, we are immediately introduced to the new Spiritualist-class, so what is it about? Well, mechanically, Spiritualists need to be lawful, get d8,4+Int skills per level, proficiency with simple weapons, shurikens, short bow, temple swords and no proficiency with armor or shield – no casting rituals or AC-bonuses when using shields and armors. The class also get 3/4 BAB-progression and good ref- and will-saves as well as spontaneous spellcasting via Cha of up to 6th level spells. They also get an AC-bonus when unarmored, scaling up to +5 and they also get unarmored strike at first level, though unlike a monk’s, it does not increase its potency, even though his/her AC-bonuses stack with monk levels and spiritualist-levels counting as monk levels for benefits of feats etc..

The class may also meditate for an hour to reroll Knowledge skill-checks with cha-mod as a bonus once per check. At second level and every 3 levels after that, the class also gets/increases its second sight. And at least for me, that is where the class gets annoying. Yes. Annoying. At 2nd level, the class gets detect charm, good, law, chaos, evil – one of which is always active henceforth. Yes. That means players can switch through them to determine alignments at 2nd level. 5 of those annoying detect-spells, permanently active. *sigh*But oh well, that’s a personal preference and will not influence the final verdict. At 5th level, see invisibility joins the fray. At 8th level clairaudience and clairvoyance and later locate creature/object and at 14th level discern lies and finally, at level 17, true seeing show up, though thankfully the locate-spells and the clairvoyance/audience at least require concentration. Still, the array of second sight abilities make running investigations harder as they require no expenditure of resources and their readily available presence means that they WILL annoy the hell out of most DMs – more so than the constantly detecting paladin even. While personally, I’m annoyed as all hell by these and the lack of resource-expenditure they require, that still does not break the class – though see invisibility invalidates a couple of creatures and tactics.

Not annoying, though, would be another class-feature – rituals. Usable 1/day+1/day at fifth level and 1/day every four level afterwards. Rituals take a full-round action to cast and interrupting them is easy – DC 15+damage received. A total of 12 rituals are depicted and…well. They are BROKEN. In a way I have seldom seen. Wow. Seriously – want to see any semblance of balancing take a massive, brutal nose-dive?

Okay, let’s make our way through: The first ritual allows you to create a wall of force that can be maintained INDEFINITELY as long as the spiritualist maintains concentration. The most powerful barrier-spell – sans being limited by terrain, cutting seamlessly through hindrances, sans caster level information to dispel it. It would have been broken even without the caveat of ALSO blocking gaze attacks and teleportation and it can’t be automatically destroyed by disintegrate. Yes, it’s not that tough hp and hardness-wise- but it’s available at first level. Yes. First level. While instead of a ritual, spiritualists may opt to gain two inspirations (more on them later) or one that replenishes 4 spirit pool points, and these options are ok, there are other options: Channeling energy equal to 1d8 + 1d8 per level or inspire courage plus SR or 2d8 points of force damage in ranged touch attack-with a force- ball-form (or via another ritual at 2d6 plus ranged bull rush – and ranged combat maneuvers are broken). That’s not the tip of the broken-mountain, though: Spiritualists can create clones – 1+1 for every five levels, with each costing them 5 hp when creating them – each has exactly these 5 hp. These clones work exactly as your character – including magic items etc. While you and your clones at least use the same abilities/resources (i.e. rounds of rage, spells etc.), this is so broken it’s unbelievable: YOU DOUBLE YOUR ACTIONS WITH EVEN ONE CLONE. You can e.g. cast a full round spell with your clone and rage/melee yourself. AND YOU GET MORE OF THEM. That’s argueably better than friggin’ Timestop. Nova-issue up to 11. Train-wreck. Most broken ability I’ve seen in ANY class for Pathfinder so far. Oh, not enough? What about restoring 2HD of fallen foes to a semblance of life (at half max HP) that has them retain all class abilities, while commanding them as free actions without them counting as undead? That’s better than ALL comparable animate spells. Another ritual allows you to summon monsters/nature’s ally – that’s okay, I guess. What’s not so great is a transformation that boosts either +2 to Str or to Dex and nets you evolution points for your own transformed form.

There also is an option to create a wind tunnel to duplicate the drag maneuver in a 60 ft. cone, hitting every foe in the area, but at least at the cost of maintaining it as a full round action. Where the ability gets completely weird and off the hook, though, is by its rules-language: Drag specifies:

“If your attack is successful, both you and your target are moved 5 feet back, with your opponent occupying your original space and you in the space behind that in a straight line. For every 5 by which your attack exceeds your opponent’s CMD, you can drag the target back an additional 5 feet. You must be able to move with the target to perform this maneuver. If you do not have enough movement, the drag goes to the maximum amount of movement available to you and ends.”

The thing is – in the wind tunnel, you don’t move – your foes move – probably towards you, though the text doesn’t explicitly specify this. What it does specify is that upon reaching you, foes receive 1d6 damage per character level – upon being killed by this ability, they are disintegrated. Let’s recap: Ranged combat maneuver on an area with perma-death chance. While not as broken as the clones, far beyond what a class with 3/4 BAB should be able to conjure forth AT FIRST LEVEL. Or fifth for that matter.

I already mentioned the spirit pool. Spiritualists get 1/2 their level + cha-mod, min 1 points of spirit pool at 2nd level. Points can be used to either add +1d4 (+1d4 for every 5 levels) force damage to attacks, +2 AC (scaling up to +6 -also versus incorporeal attacks and touch attacks) or with touch attacks negate charms and compulsions. Unlike the rituals, I have nothing to complain versus these spirit pool options.

The class also gets a selection of talent-like abilities called inspirations – the first at 3rd level and a new one every 3 levels after that, choosing from a total of 32 inspirations. These options offer a variety of options and range from getting style feats, channeling feats and some expansions of rituals: Increasing the range of channeling, increasing SR of allies inspired via inspire competence, ritual, a wind tunnel that is better at breaking objects etc. They can also opt for ki-strike via their spirit pool (not gaining access to any other ki-point based options) and a (thankfully min-level restricted) upgradeable flight, faster usage of other abilities etc. – you get the idea. But there also are some unique options in here – so-called spirit bullets for example, which essentially constitute 1d4 force damage per 2 character levels as ranged touch attack, range 60 ft -as a limit, using the spirit pool points as resource. Since it becomes available later than e.g. the Battle Scion’s force blast and is further restricted by its limited range, I won’t complain about this one. They may be upgraded, though, and the bursting version once again is wonky, hitting adjacent targets as well – but not following the usual rules for splash damage, instead dealing full damage. Not gonna happen. Whether spirit strike or spirit bullet, you may influence the type of damage by upgrading the die to d6 and making it e.g. acidic if you choose the appropriate inspiration. Depending on the element chosen, there is also a save versus further detrimental conditions. You may also heal a similar amount of damage via the use of another inspiration.

Beyond these, the class also gets evasion etc. and an extensive, hyperlinked spell-list. The pdf also includes 4 new spells. And Force Fists is BROKEN. Lasting 1 round per level, it transforms your damage to force damage while also enabling you to make unarmed strikes, combat maneuvers and flurry of blows at a range of 25 ft +5 ft. per level – force damage plus ranged combat maneuvers for a level 4/5 spell is still beyond what I’d consider acceptable. The other spells are okay, I guess and the two feats, one which nets a new inspiration and one for +2 spirit pool points are also okay.

The final page deals with advice on integrating Spiritualists into your campaign and a nice magic item, that allows you to store spirit points in it for benefits.

Editing and formatting are good, I didn’t notice any significant glitches. Layout adheres to an easy-to-read 2-column standard and the full color artworks are neat. The pdf comes fully bookmarked and extensively bookmarked, though not cohesively so – summon monster being hyperlinked for example, while summon nature’s ally, right after it, lacking its bookmark. The pdf comes in three versions – standard, unhyperlinked and more printer-friendly.

What has happened here? Seriously. Drop Dead Studios so far has rather impressed me with their previous class offerings and while there were design-elements I didn’t like (The War Dancer’s sense motive versus attack comes to mind), and while generally, the classes are on the upper power-scale, I never felt the reason to rage against a class – in fact, I really like e.g. the Vauntguard or the War Dancer. The Spiritualist, though, is a different beast. While personally, I LOATHE the detect-spell array, I wouldn’t hold that against the pdf. What I do hold against it, are its horribly terribly broken basic mechanics, namely the rituals:

Beyond their magus-level casting powers and monkish abilities, the class is defined by its powerful rituals – the other options supplementing these key powers. And they are BROKEN. Not one, multiple ones. And not just a tad bit broken, but capital-letter-level Unbalanced – If I didn’t know better, I would have assumed that another designer and not Adam Meyers had created this one. Yes, rituals are central – and limited. But still, one-trick-ponying/novaing does not an interesting class make – the central issue is that the rituals are terribly overpowered and can’t be used often enough to make the ability truly distinctive – a tighter focus on the unique class options and in exchange less BAB-progression, less spells – something. And a complete refocus of the rituals away from the nova-approach would imho be required to make this class anything but broken. I can’t even offer proper bugfixes here – so ingrained are the flaws into the class.

The class has potential, but its execution cannot be easily salvaged and honestly, I’d never allow this class anywhere near my table as written. A side of annoying detect-options with an array of balance-bombs that will even be noticeable in 20-point-buy+ high-powered games where the PCs glitter like magical Christmas trees. There’s no way around it – this class suffers from a completely and utterly broken balancing. My final verdict will hence clock in at 1 star, in spite of the pdf’s good production qualities. Steer clear if you value your game’s balance.

If you want to practice your rules-fu and try to salvage the rituals/if nova-characters are your thing, you can do so here on OBS and here on d20pfsrd.com’s shop.

The class is also available as part of a bundle with vastly superior classes here on OBS and here on d20pfsrd.com’s shop.