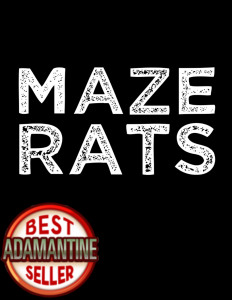 Okay, so Maze Rats is a rules-lite, condensed version of the OSR-style of gaming, a fan favorite for those who don’t like the bingo apps free style of games; the system is more akin to games like Into the Odd than e.g. AD&D; depending on which pdf you consult, you’ll have pdfs of 12 or 14 pages – why? The 14-page version is intended for booklet-printing! Nice! The game comes with a character sheet in an extra-pdf; the sheet is included in the booklet-version as well.

This review was requested as a prioritized review by my patreon supporters.

Each PC begins with 4 maximum health, and 4 current health. Each level attained nets +2 maximum health. PCs recover 1 health when eating a meal and resting; 24 hours of rest recover all health. Medicine restores 1 health but only once per day. 0 health = death.

Each PC also gets one starting feature: +1 to all attacks, a single spell slot (usable once per day), or one of 4 paths: Briarborn (tracking, wilderness stuff), fingersmith (theft, thief stuff), roofrunner (acrobatic stuff), shadow jack (stealthy/infiltration stuff); in the danger rolls for the respective chosen path, you roll with advantage on danger rolls.

Wait, what? Yeah, well, I skipped ahead to character creation. The core mechanism of the game is that, when there is danger/chance of failure, etc., roll 2d6; on a success (10 or higher), danger is averted. You add Strength, Dexterity and Will bonuses to suitable danger rolls. Opposed danger rolls between characters call for the higher result. If a roll has advantage, 3 dice are rolled instead, dropping the worst.

The game knows 7 levels and has a brief table with XPs and the table lists benefits; you can choose each level, and either get an ability bonus or can pick a feature, so no class-corset and one meaningful choice per level attained.

Initiative works in a simple manner: You roll 1d in the game’s parlance (the game only uses d6s, but I’m using 1d6 instead for clarity), and the higher side goes first; the entire side. Yes, this means that you have a chance each round for two consecutive turns for the entire party, or the entire opposition. Ouch! Each round, a character can move 30 ft. and take one action. Casting spells, attacking, drinking potions, etc. – all actions. Ambushes make you go first and yield advantage on all rolls during the first round, with the leader of the opposition getting a Will danger roll to avoid it. Combat works thus: Characters have a base armor rating of 6; light armor nets +1, and so does a shield; heavy armor nets +2. Characters in heavy armor can’t gain advantage on Dexterity danger rolls or surprise attack rolls. Heavy weapons require two hands and inflict +1 damage. Attacking works via the core mechanic: You roll 2d6 and add the attack bonus applicable (sourced from your ability scores); you can’t attack with a ranged weapon in melee. The attacker’s total is compared to the defender’s armor rating; if it’s MORE than the armor rating, the attack hits and deals damage equal to the difference between the armor rating and the result. A result of double sixes is a critical hit and doubles damage. If a hit character has a shield, they may choose to sacrifice it to absorb all damage.

The system comes with a simple NPC-reaction chart, and encumbrance is also interesting: Belts can hold two properly-sized items; backpacks can hold what a backpack can hold, but it takes 1d6 rounds to retrieve something from it. Magic is pretty free-form: You roll 2d6, one die indicating row, one indicating column: We have essentially physical effects, physical elements, physical forms, and the same for ethereal effects, elements, forms. The magic system requires some degree of GM skill regarding improvisation, and RAW lacks any meaningful PC control – “Magic, do what thou wilt!” Whether that’s a bug or a feature for you depends on your tastes.

The monster rules are simple and work pretty much analogue to the character rules, but with +4 being the highest bonus critters can have. You can roll quickly on a base to determine aerial, terrestrial or aquatic animals, then add monster features, traits, abilities, tactics, personality and weaknesses. These all are pretty much one-word baselines.

Treasure and equipment follow a similar approach: Basic prices are given for item categories, and then, we have category-style lists, like “Tool Items”, “Miscellaneous Items”, etc. These one-word tables are also used as a baseline for city-creation, wilderness-creation and dungeon-creation. The pdf does include a brief play-example, and offers some beginner’s advice for GMing/creating the respective environments, etc.

Editing and formatting are very good on a formal and rules-language level. Layout adheres to a no-frills two-column b/w-standard sans art. (It should be noted that one page contains 4 columns.) This is a very dense game. The pdf has no bookmarks, but doesn’t absolutely require them at this length.

Ben Milton’s “Maze Rats” is probably one of the best “teach to play roleplaying” games I’ve seen in quite a while; it is easy to grasp, concise in its presentation, and manages to actually squeeze some meaningful choice out of its rules lite, simple and elegant chassis. Indeed, pretty much everything on the player-side is very elegant; on the GM-side of things, the relatively free-form magic would have perhaps warranted some guidance, but that’s about the worst thing I can say about this game. Maze Rats triumphantly succeeds at what it sets out to do, and *personally*, I prefer it over the author’s other rules-light game Knave, though that is primarily a matter of taste.

There is but one thing that kinda annoyed me: You can’t copy text, and you can’t search the pdf; I am no layout artist, but that stuff bothers; since I run lots of different systems, being able to parse together my own cheat-sheets its really helpful.

That being said, for a paltry $3, you get one damn elegant ultra-rules-lite game. This is geared for one-shots and very short-campaigns (as evidenced by the swift XP/level-progression), but man does it handle its subject matter well!

Now, as a person, I like more choice and build diversity in my game, I prefer campaigns, and I’m not a fan of the free-form magic, but as a reviewer, I do see the value of a system of this simplicity and smooth elegance, and what is a bug for me might well be a feature for you. As a reviewer, my preferences should not unduly influence the verdict, and frankly, I can’t help but admire how condensed, precise and elegant this little piece of RPG-design is.

As such, my final verdict will be 5 stars + seal of approval. If you’re looking for an easy to teach ultra-lite setting-agnostic fantasy RPG, then this will be what you definitely want to try out.

Oh, and there is one other benefit for fellows like yours truly, even if the book, in the long run, is not your cup of tea: If you or your Maze Rats players at one point want more choices and means to differentiate characters mechanically from each other, then the mechanics of this game will make it easy to adapt to Best Left Buried, easily one of my favorite games. Heck, I’d teach people to play with this game, then graduate them to BLB, but that’s just me.

You can get this streamlined game here on OBS!

If you consider my reviews to be useful, I’d appreciate any tip you can give via paypal, or by joining my patreon. Thank you.