Quests of Doom: Pictures at an Exhibition (patreon request)

Quests of Doom: Pictures at an Exhibition 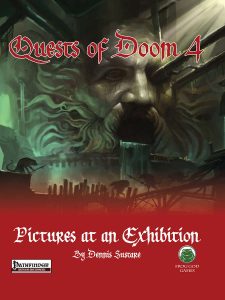 This module is intended for 4–6 characters of levels 4th to 6th, and as always, it is better to tackle it with a well-balanced party. The module offers rather detailed readaloud text, and it offers essentially two handouts and a single b/w map; the map does not come with a player-friendly version, which is a rather significant comfort-detriment. One of the handouts is essentially an exhibition list that takes up slightly less than half a page – having that on its separate page would have been preferable as far as comfort questions are concerned. Personally, I enjoy handing the like to my players without having to cut out half a page.

It should be noted that this module begins on a cruise ship in the real world, not in a fantasy setting, and then quickly moves to a waterfront museum, so if you’re opposed to that sort of set-up, you might need to do some rephrasing. Indeed, the whole real-world angle is utterly superfluous: This works perfectly fine in a regular fantasy world with slight rephrasing.

The module does have a minor weakness in the transition to the actual gaming: The adventure expects the player characters to move past the rope towards one of the pictures – which’ll suck them in and position them in a fantasy world. Now *personally*, I’d never step beyond the rope in a museum, and same goes for my players, so you might have to push the party a bit there. Structurally, each picture is a short little vignette, easy to place in ongoing campaigns.

There are other oddities in this module: I noticed a reference to an adventure called “Tourist Traps” by Frog God Games. That does not exist to my knowledge. Furthermore, we have a few instances of rules hiccups in the mechanics. The conversion to PFRPG isn’t exactly the smoothest. “Mostly Functional” is how I’d describe it.

Each vignette has an objective, but also means to fail the respective vignette.

And that is pretty much as far as I can go without diving into serious SPOILER-territory. Potential players should jump ahead to the conclusion.

Okay, only GMs around? Great! So, in vignette #1, we have a puzzle that is solved only by player-skill, which is a nice thing to see per se: A Christmas gnome is surprised by the arrival of the PCs, drops presents, and the party needs to put them on the correct place in a diagram that looks like the Star of David. I *LOVE* this idea; this setup is also represented by a nice handout – which is great!

HOWEVER. The handout actually spoils the solution. When the party arrives, only three presents are on the diagram, the rest is under the tree or dropped; they have different wrappings that should correspond to the sigils on the diagram. The places on the diagram are probably intended to be numbered (Horseshoes in location #8, but there are no numbers on the diagram…), and at one point, this probably was a pretty cool puzzle. As presented, it’s ridiculously simple: Present with shield on its wrapping goes on the shield space in the diagram. That’s *literally* square shape goes in square hole toddler-level of difficulty. The contents of the presents are somewhat lame magics, or pretty powerful – scroll of cure wounds (does not exist in PFRPG) vs. a +1 mace. Or “Wisdom +1 (Or Intelligence +1 for a magic-user)” [sic!] – it is pretty evident that this wasn’t properly converted. It also feels like something went wrong in production: Perhaps the handout was commissioned before the puzzle was finalized?

Vignette #2 has the players witness a balladeer serenading a princess; in the aftermath, the party’s supposed to help them elope, either by scaling the tower, or by fighting through laughably weak guards. Since the keep has no map, it’s also too opaque to make it a proper infiltration. Not challenging or interesting, next.

Vignette #3 has the party arrive in the aftermath of a bear having been stolen in a public plaza; the trail leads them to a ship, and if the party beats the weak crew, they’ll find a chained man below deck, who turns into a bear and attacks if freed below deck, only to calm above deck. Okay. There is no indicator of the transformation; this should be codified with magic items or spells. It’s also a weird railroad, since the module does not account for Handle Animal etc. to calm the bear.

The next vignette is another puzzle, one that deals with a cow-drawn cart and its sick entourage. This one is actually, genuinely, great: The cart’s entourage seems sick, and the cart sports runes: These cart runes are based on a selection of 12 runes. One, for example, looks like the rune for “iron” and that of “water” – this is the key to unlock it: Splaying blood on the rune eliminates it! While a rules-relevant reference is incorrect, this puzzle (it does come with visual representations of the basic runic array, but not of the cart-runes) is genuinely nice and well-presented. I liked it!

The next vignette is a battle in an amphitheater against 6 harpies. Okay. That happened I guess. Hope the group has serious ranged combat capabilities.

Next up, we have a moral dilemma: Smuggle a rich orc or a poor orc out of the city. Since we have no maps, no real established setting, this falls flat. There is no proper way to plan any exfiltration. The poor orc offers a family member as a slave for payment – distasteful, I know. The paragraph notes: “If the party accepts this deal, any character wearing a protection amulet is immediately burned for 1 point of damage per round until it is removed.” What damage? What is a “protection amulet”? No idea, it’s never mentioned before or after.

After that, we have literally a Solomon scenario, i.e. two individuals claim that something belongs to them. No, the solution is NOT different from the classic solution. It’s just a reskinned version. LAME. No means to solve it via Sense Motive or magic are provided either.

The following vignette is the mapped one: A vampire is at work, much too strong for the party. Flying, chanting skulls do help, though. The skulls belonged to holy people, taking from their sarcophagi. Returning the correct skulls to the correct sarcophagi is the goal here, and each skull utters a somewhat cryptic sentence that helps assign it. This one works and is genuinely fun.

After that, we pit the party against a witch in a chicken hut: Weakest take on the Baba Yaga trope I’ve seen so far, and there are errors in the witch stats, the stats of her familiar and the hut. Funniest glitch herein: The chicken-feet hut specifies that it is “Male” in the statblock. Call me puerile. That mental image made me laugh.

The vignette after that takes place in war and has the party try to reach a gatehouse; the conversion fails to specify DCs for the locks and actually has the boss of the vignette comes with the proper stats. The PFRPG-statblock has errors, and the module actually also has the OSR statblock erroneously included. WTF. This should have been caught be even cursory editing. The module also doesn’t understand how Diplomacy works in PFRPG.

And that is all.

Conclusion:
Editing and formatting are bad on a formal and rules-language level. Not just mediocre, but bad. There are errors in rules, some oddities that compromise the integrity of one of the puzzles, and constant absences of proper rules. Layout adheres to a two-column b/w standard with one nice handout, one inconvenient ones. The cartography provided for one encounter is solid, but the absence of a player-friendly map hurts it. The pdf comes with basic bookmarks, but not ones to individual vignettes.

This is the second module by Dennis Sustarre I’ve reviewed, and I know he is a legend. From this module, though, that is certainly not evident, and the first wasn’t better either. Half the vignettes are uninspired combat challenges with lame adversaries; the real-world framing device needlessly limits how this can be used. There are hiccups in mechanics and structure of some of the vignettes, and Anthony Pryor’s PFRPG conversion is rudimentary at best. There are two vignettes which, while rough regarding the rules, actually are fun and rescue this module from being utterly useless: The cart puzzle and vampire-scenario are both fun and show what the author can do, flawed rules notwithstanding.

Let me make that abundantly clear: Were it not for these two, I’d consider this to be a 1-star module, but these two are so fun that it might elevate this module for some GMs out there. They are worth scavenging, imho. But the module as a whole? Rushed, carelessly presented. It’s genuinely heart-breaking to me. Hence, my final verdict will be 2 stars.

I’ve always considered myself a fan of Frog God Games, but the modules released under the fourth Quests of Doom-series so far have been painful, to say the least. And not in a fun way. Here’s to hoping that the remainder of them work properly.

You can get this module/series of encounters here.

My review is based on the PFRPG-version.

The OSR (Swords & Wizardry) version can be found here.

if you considered this review helpful, please consider leaving a donation via paypal, or joining my patreon. Thank you.