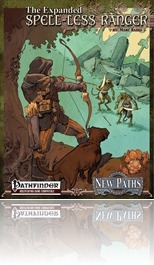 This pdf from Open Design is 15 pages long, 1 page front cover, 1 page editorial, 1 page SRD, leaving 12 pages of content, so let’s check this one out!

For those of you not in the know: In KQ #11, Marc Radle created an alternate version (meaning no multi-classing with the regular ranger-class) of the ranger-class that fits closer with irl mythology: The spell-less ranger replaces spells with a selection of neat ranger talents – a great approach that has been expanded in this pdf, but let me give you the run-down:

The spell-less ranger gets full BAB, d10, 6+Int skills per level, good fort- and ref-saves, up to 5 favoured terrains, up to 4 favoured terrains and additionally stealth attack (which is a terrain/favoured enemy-based, weaker variant of sneak attack), combat styles, 4 special uses of the healing-skill when in favoured terrain (including treating deadly wounds, poisons and diseases) and so-called ranger talents: A total of 25 are provided and run the whole gamut from additional animal companions, bonus feats, less fall damage, scent, the ability to negate concealment via hawk’s eyes, trackless stride and improved swimming and climbing capabilities. High-level rangers also can look forward to quarry, improved quarry, hide in plain sight etc.

The result of the changes made to the class are evident – looking at the ranger talents it becomes rather clear that a regular fighter won’t outshine a guerrilla-style archer ranger, for example, defining the niche of the class more closely. 18 new feats help the ranger by providing further customization options that range from the rather simple “Additional favoured terrain” to very interesting feats: “Coordinated Attack” gives your companion access to all your teamwork feats. Another interesting one would be “Defensive Shot”, which FINALLY gives you the chance to use ranged weapon in melee with a penalty. A godsend for campaigns without divine magic (or groups without primary healers) is “Improved Nature’s Healing”, which significantly improves the amount of Hp you may heal by using that ability. Add to that the increased damage output via “Deadly Accuracy” and its improved version (which let you reroll 1s and 2s of ranged attack-damage-rolls) and we have a great class to simulate e.g. the deadly elven guerrilla fighter. All in all, I considered the feats to be well-crafted and none of them to be overpowered or utterly boring. (I’d btw. suggest to add SGG’s Knacks from their Ranger-book to the list of available ranger talents!)

This is not where the pdf stops, though: We also get two new archetypes for the ranger: The Dual-style ranger gets only one favourite enemy, but two combat styles. The companion-bound ranger is rather complex and can select from a druid’s companion-list, enhance his companion, gain aforementioned coordinated companion etc., but at the cost of his favoured terrain, camouflage etc.

The pdf also includes info on the 5 styles introduced in the APG and does something EXTREMELY useful: It provides us with a favoured-enemy/terrain-char-sheet to add to your regular char-sheet – useful, well-constructed, awesome! Even better, we get yet another extra sheet for animal companions that could also be used for familiars etc. and makes for one of the most clearly arranged ones I’ve seen so far. Kudos for this great bonus!

Editing and formatting are top-notch, I didn’t notice any glitches. Layout adheres to an easy-to-read, relatively printer-friendly 2-column standard. The pdf has a beautiful front cover, but no bookmarks, which is a bummer in this day and age. Due to being relatively short, I’m willing to let that one slip, though. The spell-less ranger is popular for a reason – Marc Radle has crafted an excellent alternate class and with the new expanded material herein, there are even more reasons to go spell-less than before. This alternate class is awesome, well-designed and the additional content lacks any feats, crunch, etc. I’d consider badly designed or unbalanced. In fact, I absolutely love this take on the ranger, as it makes the class feel more unique and less than a fighter/druid-hybrid. After SGG’s stellar “Ranger’s Options: Knacks of Nature”, this is the second book in a short space that easily can be considered to be a stellar pick for any fans of the concept of the ranger, but not its core-execution. Even for the adherents of spell-casting this pdf is well worth the pick for the archetypes/feats and if you can spare the bucks, combine its talents with SGG’s knacks (by e.g. adding the talents as knacks or vice versa) – I guarantee you won’t find the result unbalancing. When all’s said and done, a great start for the new line, Marc Radle did an awesome job and I look forward to seeing more! My final verdict? 5 stars+ Endzeitgeist seal of approval.