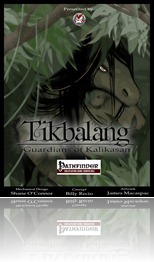 This pdf from Nosfecatu Publishing is 17 pages long, 1 page front cover, 1 page editorial, 1 page SRD, leaving 14 pages for the Tikbalang, so what exactly do we get?

Tikbalang are essentially temperamental fey and are humanoids with equine features. They are presented as a player race and get +2 Con and Cha, -2 Wis, normal speed, a bonus to acrobatics and spellcraft, constant feather step, +2 to initiative, low-light vision, are of the fey-base type and have a certain strand of hair in their mane – as long as this strand is not cut from the Tikbalang, they also have a +2 bonus against spells and spell-like abilities.

Thankfully, the race-write-up also provides starting age, age category and base height/weight tables for the Tikbalang. How the Tikbalang view the classes from the Core-rules, APG, UM and UC is covered as well and 7 alternate racial traits are part of the deal: If you e.g. want a nimble Tikbalang, you can trade in their Con-bonus for a Dex-bonus and if you rather enjoy an untraceable one, you might also trade feather step for pass without trace. Alternate skill bonuses, a bonus against humans and 8 favoured class options as well as two race traits lead to advice on playing a Tikbalang.

Next up are 8 racial feats that expand upon the fey nature of the Tikbalang – they e.g. may make their mind-influencing spells more powerful, but become more susceptible to being deceived via similar magic. Gaining natural hoof-attacks and a longer charge distance are also possible, as is the ability for high-level Tikbalang to use ethereal jaunt for as long as they run and don’t stop moving once per day.

Two racial Prestige Classes are provided, the first being the eldritch runner (5 levels, d6, 2+Int skills, bad fort, good ref-and will-saves, full spell progression, bad BAB), which grants the Tikbalang the ability to be faster in rounds they cast spells, a touch attack via deadly winds, the ability of a combined invisibility/mirror image when moving and an ability with which I have a major problem: Master of the Winds lets you move up to your speed AND cast a spell as a full round action. To add insult to injury, if you’re casting a touch attack spell and move to deliver it, you don’t even provide an AoO. And there’s no limit to how often this can be used per day. Compared to that, the dominate person-capstone ability blanches.

For those more martially inclined, the Razormane Rampager should be enticing: The PrC gets d12, 4+Int skills, good BAB, good fort and ref-saves and bad will-saves. The class makes the mane of the Tikbalang a secondary weapon. Which may hurt foes who hit the fey. At higher levels, they get the power to enter a rage when severely injured even when they have used their rage-allotment for the day and also increase their size when raging. I don’t know. Hitting foes with a mane? Seriously? At 1d4 the attack is not very effective and the additional abilities don’t feel that exciting either.

After all this content for players, DMS also get their due with new Tikbalang-creatures: The Addlewalk Tikbalang (CR 7) can curse foes to become lost and suffer from an uncontrollable wanderlust. A dark Tikbalang, transformed by dabbling in dark magic, the CR 10 Nightmare Tikbalang is infused with hellish powers and may grant his foes demoralizing visions of hell. Largest of the Tikbalang, the CR 13 Leaping Giant is an anything but subtle jumper with smashing stomps that may knock foes prone and rather powerful physical attacks.

An extensive section on Tikbalang-lore and advice for the GM on how to use them in your game and especially on how to handle the golden strand and the potential vulnerability it provides.

The final page of the pdf offers something rather cool: Two new incantations, one to invoke the spirits to enhance your powers and one to bind a Tikbalang to your service via their golden strand of mane.

Editing and formatting are very good, I didn’t notice any significant glitches. Layout adheres to a 2-column full-colour standard. The artworks range from unique in style (monsters) to very comic-style b/w-renditions of a sample male and female Tikbalang. The pdf has no bookmarks, which is a minor downer. Though some sentences could use a slightly more refined prose, the writing generally feels adequate and make me interested in the world of Buan, which is based on Philippine mythology and seems to have a very distinct feeling from the sparse bits of information contained in this pdf. I wouldn’t have much to complain about with regards to the base race of Tikbalang, were it not for the fey-subtype – the immunities granted by not being humanoid are unnecessary and while easily rectified, I consider the race to be more powerful than the core-races, even when taking the potential power/weakness regarding the golden strand into account. In fact, I would have loved to see more focus put on this unique part of the race. The feats were neat, but the PrCs felt a bit whacky to me: Perhaps I’m not the target audience, but fighting with a mane seems kind a silly to me and the rampager remains rather weak, while the eldritch runner gets an ability that lets it do something AND cast, which always leaves me with a bad feeling. All in all, though, a solid amount of content is provided and the Tikbalang does feel unique. The fey-subtype, while fitting, rubs me slightly the wrong way and balancing feels slightly off. The lack of bookmarks is also unfortunate and thus, I’ll settle for a final verdict of 3.5 stars, rounded up to 4 due to the low price and the fact that the pdf is rather brave. If you really always wanted to play an equine character, this may be a must-have for you.

Tikbalang: Guardians of  is available from: