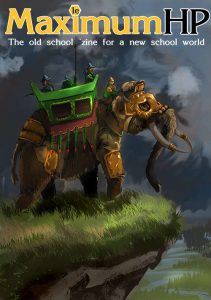 Okay, so rules-wise, this is based on 1E, making it most suitable for OSRIC, and conversion to other systems pretty simple. Nominally, the content herein is a glimpse of the campaign setting of Artera, but it is pretty easy to integrate in certain other settings, namely old-school Forgotten Realms. The aesthetics here are those of vanilla fantasy (not meant derogatory!), lacking the grit we usually associate with Greyhawk. The themes herein are ones that make the fantasy feel pretty contemporary, using magic as an analogue of sorts for more modern concepts; much like the Forgotten Realms are no medieval setting, and not even early modern analogues. This is a wise choice, for remarkably few ‘zines cover this angle.

Regarding themes, this is all about dwarves, their culture, associated items, etc., so what exactly do we get? Well, for one, we get some salient advice for GMs and players new to the old-school experience – namely keeping notes on NPCs and the like, and, in the back, some genuinely nice advice for (high) fantasy campaigns on how to handle the mortality of characters – you know, getting on the good side of clerics, budgeting for resurrection/raise dead…that sort of thing. It may be obvious for many, but I certainly recall my humble beginnings, and this advice, back then, would have been rather helpful, so kudos for these pieces of advice.

From here on, we begin to take a look at means to make dwarven settlements come to life, with the example being mighty Dwarfhome’s business district. After a brief overview, we get three different stats for guards of different capabilities; as a nitpick, the lowest level iteration notes encompassing 3 levels, but only offers a static THACO for them. Why not provide three correct stat-arrays? It’s not like that’d have taken up much space. After this, we get 6 fluff-only businesses, with ach business owner listing their ability scores, but not their full stats. Why? No real clue, but the businesses are actually really nice and charming: We have a gruff beard barber obsessed with personal grooming, a cobbler specializing in really good dancing shoes, a guy who offers tours in the Everdark, a lady making delicious jams, and the QPP – Quatell’s Potato Processing, and finally, a poultry specialist. These write ups are plausible, and show some modern concepts without feeling intrusive/immersion-breaking, adding a nice level of quirkiness here. This is Fail Squad Games at their best.

Of course, the book also has three general dressing table – a 2d10 table for physical quirks, a 2d10 table for mental quirks, and a 2d20 general quirk table. From unusual dentation to missing fingers, club foots, etc., these are solid, if not ground-shattering. After this, we get 3 benevolent NPCs and 5 villains, with full stats each. While magic items are not set apart, the spells are formatted properly here, but there is one odd thing going with them: Their stats are included in somewhat NPC-sheet-y boxes that list the ability scores, etc., which is nice, but oddly, all text in the boxes is slightly pixilated, as though it was badly scaled up from a low-res image. This does not negatively impact the utility of these NPCs, but it did admittedly irk me. The builds are generally better than in some of Fail Squad Games’ other offerings, though I did notice some errors regarding e.g. a 3rd level bonus spell missing, or thief-abilities not properly applying the bonuses gained via high Dexterity. These issues are not universally present, but they are here.

The pdf then proceeds to  present 7 new magic items. These items do not sport GP- or XP-values, fyi. Anyhow, there is an enchanted comb, boots that increase the speed of dwarves to humans, a warhammer +1/+2 vs. undead, +1 more for good dwarves, which has a limited amount of spells-in-a-can (not properly set in italics). There are tools for making better jewelry, a monocle to see in darkness…these are pretty bland. I did like the satchel of pebbles that turn to boulders when removed from it and tapped – enterprising PCs can do some cool stuff here. The most interesting item here would be the dwarfhome stones, made from bantam cockatrice eggs. These allow dwarves to foster their connection with their mountainous home, help vs. curses…and there is a VERY low chance the cockatrice may hatch as a loyal, if troublesome, pet. More items like this, please!

After this, we take a look at the beasts of burden: Unstatted dwarven ponies are explained alongside the fully statted dire boars and how they are domesticated. The lion’s share of this section, however, is devoted to the woollyphont featured on the cover: These are crosses between oliphonts with wooly mammoths, and I genuinely liked this section – not only do we get stats for them, and yes, they are living tanks that WILL wreck you, the ‘zine also provides advice on considerations regarding their integration into your game, how long they take to raise and domesticate, etc.. Suffice to say, while PCs may want them, dwarves will throw a LOT of hassle and red tape their way…This is one of the highlights of the ‘zine.

Unfortunately, we follow this with easily the worst part of the ‘zine, a brief adventure for 4-5 level 3 characters, which is primarily a linear exploration of some tunnels in the Everdark. Random encounters are provided, and the PCs are sent essentially into the tunnels to save some dwarves. The module makes use of some of the villains introduced earlier. The module sports a new monster, a mutated, massive kobold brute-thing, which is pretty unremarkable. I can’t really recommend the module, not because it’s bad, but because it’s pretty much unremarkable.

Editing and formatting are still okay on a formal and rules-language level, if certainly not impressive; I noticed a couple of glitches, some of which influence rules-integrity. Layout adheres to a one-column b/w-standard, with plenty of really nice, original b/w-artworks. As mentioned before, the NPC-boxes being somewhat pixilated hurts this aesthetically. Odd: The ‘zine uses white text and black header-lines, and in my printed out version, the white text just vanished. Tried it with two printers, happened both times. The module sports a solid b/w-map, but lacks a player-friendly version. Grating: The ‘zine lacks any bookmarks, making navigation a pain in the behind.

Lloyd Metcalf’s first Maximum HP-‘zine was an uneven experience for me: On one hand, you can see the talent and vision here: In some items, in the quirky characters, in the Woollyphont entry, we have some fun and joyous entries; you can feel the joy oozing from the page there. Let’s take the dwarfhome stones – they may not exactly be mechanically interesting, but they have heart, flavor; they feel magical. They are great. Back to back with a bland spell-in-a-can hammer? It almost feels like totally different people wrote this – one who really loved what they were doing, and one who painted by the numbers and phoned in the other components. The ‘zine oscillates between stuff I’d consider to be 2 stars and 4 stars, same going for the mechanical components; so my final verdict will thus clock in at 3 stars.

If you enjoy my reviews, please consider leaving a donation here, or joining my patreon here!