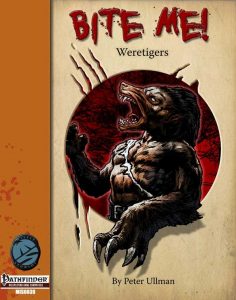 This installment of the Bite Me!-series clocks in at 33 pages, 1 page front cover, 1 page editorial, 1 page ToC,4 1/5th pages of SRD, 3 pages of advertisements, leaving us with ~23 pages of content, so let’s take a look!

This time around, we take a look at weretigers, now reimagined as part of the Bite Me!-series. They get +2 Dex and Str, -2 Int, the two bloods racial feature (making you count as a parent race as well as a shapeshifter for purposes of being affected by effects), low-light vision, +2 to Perception and Survival. Beast Form works is presented in a rather precise wording construct that takes temporary hit points, equipment and the like into account and the odd formatting discrepancies gone – no complaints. In beats or hybrid form, DR 2/silver is gained and increases by +2 every odd level gained to a maximum of DR 10/silver. The weretiger gains wolfsbane vulnerability and silver vulnerability. Weretigers also gain +4 to Stealth in undergrowth while in beast or hybrid form – that should probably be a racial bonus, though. As written, it is untyped. That may just be me, but I am not too keen on wolfsbane as a universal vulnerability for lycanthrope-races; to me, it makes less sense for weretigers to be affected by it, but that just as an aside. Okay, here is something that will be cheesed by power-gamers: Weretigers with natural weapons increase the base damage of their claws and bite attacks by one step if they receive it from another, non-racial source. This does not have a non-stackable note. Worse, the rules-language is sloppy: “Increase their hybrid form’s damage by one step” – this would also pertain weapons and lacks the reference to the specific natural weapon in question: As written, a bite-enhancer, a claw enhancer etc. would stack for ALL damage caused, not only for the respective natural weapon.

The beast form nets 3 natural attacks and rake as a start, which is pretty nasty. The race is, as a whole, stronger than the other Bite Me!-races introduced so far, which may or may not bug you. Good news is that, if you ignore the horrid dice-step-increase (or use it RAI), it should remain manageable. Weretigers are go-getters and natural rulers and none-too-social and the general flavor provided is solid. On a plus-side, the pdf comes with a full age, height and weight-table. The pdf comes with a total of 10 alternate race traits that include white pelt and arctic acclimatization, alternate racial stats (-2 Str, +2 Dex and Cha), being a black panther, gaining 3 1/day SPs…and replacing silver vulnerability with gold vulnerability. This did elicit a sigh of relief from yours truly – I’m a rather big fan of diversifying lycanthropes more and this is a great way to do just that. On a formatting level, it is somewhat odd to see RP-values for all components in the table listing them all, but have the RP-values inconsistent in their depiction behind the respective racial traits – the base lycanthrope frame-work lacks them, while they are noted in the headers of the new/customizing options. This is aesthetic, though. On the plus-side, the pdf prearranges the alternate racial traits in 3 handy bundles. The favored class options provided for the APG, UC and magus classes are generally nice and lack issues, through +5 ft.-range for non-touch hexes for the witch may be a bit too much.

The pdf also offers new class options, the first of which would be the lycanthrope bloodline – and no it’s not the lycanthrope bloodline from the main Bite Me!-book, nor identical with the other lycanthrope bloodlines…so why not give it a less occupied nomenclature? The bloodline nets DR, Constitution bonuses as well as scaling claw attacks with bleed added. Higher levels allow for a kind of pseudo-rage as well as a capstone Hybrid/Primal transformation shapechanger-apotheosis. This does not change the fact that melee-centric sorcs usually are a pretty bad idea, so yeah. The pdf also features a subdomain – the rakshasa subdomain, which features blasphemous, weakening whispers, whose penalty can be mitigated by committing evil acts…cool! Speaking of which: The pdf features racial archetypes as well, the first of which would be the Durjana inquisitor, who is a servant of rakshasa rajadhirajas (5 sample provided) with a unique judgment. 3rd level nets a raktavarna rakshasa Improved Familiar in the shape of a favored weapon, replacing 3rd level’s teamwork feat. Solo tactics is moved up to 6th level. Instead of Discern Lies, the archetype can lie with impunity, undetectable by mundane means and 20th level nets a rakshasa apotheosis. As a nitpick, the capstone apotheosis does not specify whether the natural weapons gained are primary or secondary, but that can be pretty easily be deduced.

The second archetype herein would be the Silvertongue bard who gains a powerful charming performance that thankfully comes with a once in 24-hours hex-style limit as well as the higher level option to inspire true devotion from the targets. Instead of versatile performance, the archetype learns to pen missives that contain compulsions, which oozes narrative potential. Thematically, the archetype also gets social skill benefits. This pdf has the best racial archetypes in the whole series so far. No cookie-cutting, unique, cool.

The pdf also provides 13 feats, one of which would be the classic Hybrid Shape of the Bite Me!-engine. Unfortunately, the feats are not all great -Beguiling Speech is a sucky skill-bonus feat. But that’s about it regarding suck: We get bite attacks, which can be enhanced with bleed; darkvision 90 ft., leadership-enhancing, better stalking…oh. And Sabertoothed. Sabertooth weretiger. Oh yes. Wolfsbane Resistance can also be found, swim speed and sensitive whiskers that allow for miss rerolls are also part of the deal. Limited wound healing by licking them and hurl nauseating hairballs (!!!) at foes complement this section, making the feat-chapter this time around by far the most inspired in the series so far.

Regarding items, we get alchemical gold as a new material and two magic items – jade tiger figurines and rings that can store weapons – no complaints here. The pdf does feature 5 new spells (alongside a modification of summon monster for weretigers) – the spells include a multi-tiger summoning spell, a tiger-polymorph buff, the silvering silverclaw spell (which can be modified to be gold instead) as well as a powerful spell that makes hands into oversized jadefists that can be used as touch attacks and smashed together to destroy them and send them flying as jade shrapnel showers towards a foe. As a nitpick, it does not specify damage-types for the damage inflicted. Finally, the 9th level Ritual of Nine Lives is incredibly powerful -basically a raise dead, cast 9 times in advance. Damn powerful and potentially campaign-changing, so handle with care…but also pretty cool.

As always, we also receive fully developed NPCs with extensive backgrounds, schemes and motivations and the like – the first would be a CR 2 magus (familiar included) and the second would be a CR 11 barbarian – the latter character comes with the badass Hybrid shape form included and the great full color artwork depicting her.

It’s been a while since I bashed previous works of Peter Ullman. Suffice to say, I did not look forward to this installment…only to be positively surprised. While not 100% perfect, the pdf does several things right: Weretigers feel significantly more culturally distinct than previous Bite Me! lycanthropes; the archetypes are more interesting than in previous iterations and the general book feels fresher, less sterile – in short, the book has more bite, makes me want to include its material. Come on, you know you want to play a sabretooth-weretiger barbarian and hurl hairballs at foes, right? I know I want to! This is not goofy, though – the archetypes and material can be played as such, but is pretty serious. The installment, as a whole, is the first of the individual race-centric Bite Me!-books that really has this spark, this inspiration suffusing the book. My final verdict hence will clock in at 4.5 stars, rounded down only because of the minor hiccups here and there; if this was formally perfect and had its very minor rough edges polished off, this would be 5 stars + seal of approval. if you get one of these, get this one!

You can get this cool installment on weretigers here on OBS!