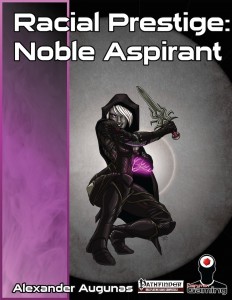 The first installment of the Racial Prestige-series clocks in at 7 pages, 1 page front cover, 1 page editorial, 1 page SRD, leaving us with 4 pages of content, so let’s take a look, shall we?

We begin this short pdf with an observation on Prestige Class-fatigue, one I’m inclined to share – while 3.X went overboard and while archetypes definitely have their role, I do maintain that entering a certain class once you have progressed, an elite-class, if you will, a sound concept -in fact, I use quite a lot PrCs in my games, many home-brewed due to a distinct lack of good ones – it is not without snickering, though, that I noticed this product referring to itself as “Everyman Archetypes: Noble Aspirant”, obviously bespeaking a change in design focus during the creation of the product.

Now this obviously needs further definitions, namely, level-dependant abilities, which constitute abilities that improve based on the class level, while incremental abilities improve on SPECIFIC class levels – thus an important distinction is made between the two and we can, the terminology out of the way, dive into the nit and grit of the actual PrC – though it should be noted that yes, we get an aptly-written flavor-text and some observations on the PrC’s role. The Noble Aspirant is obviously a drow-PrC and nets d8, 3/4 BAB-progression, 1/2 Ref-save progression and 4+Int skills per level. The Noble Aspirant also receives aligned class progression at every level but 1st, 5th and 9th, with choice of the aligned class being up to the respective player to reflect the diversity of backgrounds from which Noble Aspirants may hail.

First level nets the Noble Aspirant a pool equal to 3+ 1/2 PrC levels, which can be used to regain uses of spend spell-like abilities by spending an amount equal to the SP’s level as a swift action, but thankfully only ones that sport the racial requirement of drow. 2nd level and every two levels thereafter net a noble talent, chosen from a list that features additional racial traits, racial feats, an extended noble reservoir and the class may also learn regain uses granted by feats – though not SPs. This particular component makes me a bit weary – if you’re like me and allow a lot of rules-supplements, even limited regaining of a limited resource can prove to be rather powerful, especially when compared to the less powerful options provided by some other talents. Better weapon familiarity (including specialization-synergy) and applying a select array of metamagic feats to SPs would also be possible alongside several poison-based tricks.

3rd level nets the character Improved Drow Nobility (or a talent, should she already have that feat), while 5th level and 9th level net a stacking +1 to overcome SR with racial SPs. 7th level nets Noble Spell Resistance (or a talent, if she already has it) and is confusingly, called Greater Noble Heritage. Why confusingly? Because the capstone nets the Greater Drow Nobility feat – this time sans a replacement, should the character already have it and +2 to Dex, Int and Wis. This confused nomenclature is kind of baffling -sure, it doesn’t render the PrC bad or anything, but it is a rough edge I’m not used to see from Alexander Augunas’ design.

Editing and formatting are good, though not as flawless as in most of Alexander Augunas’ pdfs. Layout adheres to an easy-to-read, beautiful two-column full-color standard and includes a nice piece of original full-color artwork. The pdf has no bookmarks, but doesn’t need them at this length.

On a meta-level, I really, really like what Alexander Augunas has done here – the creation of the aligned class terminology and its effects, the precision used to distinguish between the different abilities – all of this constitutes structuring elements I really, really like – for aspiring designers or homebrewing GMs, this page alone is worth the asking price. I also per se like the idea of racial PrCs that make classes stand out more and the trope of the drow noble fits perfectly. But still, ultimately, I wasn’t really blown away by the Noble Aspirant.

With the aligned class-progression as a concept, one obviously has a different balancing metric to go by and, conversely, the abilities granted by this class must still remain valid in combination with different base classes. And the PrC kind of succeeds here – but at the same time, this close adherence to the base-class ability-progression also means that the PrC itself simply doesn’t have that much of its own distinct identity – its focus on drow SPs may be kind of nice, but on its own, it is not a particularly distinct basic concept.

At the same time, it does make the idea of a drow noble work in a new way – and one that probably is more compelling than a significant array of takes on the concept I’ve seen. In the end, this may not be perfect, but it is a nice, inexpensive pdf – well worth a final verdict of 4 stars.

You can get this ncie pdf here on OBS and here on d20pfsrd.com’s shop!