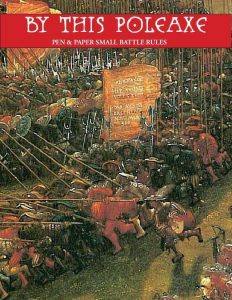 This little FREE pdf clocks in at 5 pages, 1 page front cover, 1 page editorial, leaving us with 3 pages of content.

This supplemental pdf basically provides a small-scale battle-rules variant of the mass combat system presented in “By this Axe.”

Each squad is made up of up to 5 combatants and is represented by a single figure.

Attack value is a squad’s ability to hit on a d10; total HD and divide by 5. A table of modifiers and AV by HD is provided. DV is calculated by averaging the AC of the squad and is used as a saving throw – I also assume that we use a d10 here, but I’m not 100% sure. Cover and defensive abilities modify this. Morale represents the value that you need to roll under to avoid breaking and running. Morale is checked when the squad takes a hit, when attacked from rear, flank or surprise or when friendlies are routed in line of sight. Footmen receiving a mounted charge must also check.

HtK is based on members of the squad and HD of the participants. A squad at 0 HtK is obviously out of the fight, and must roll on the table to determine how many are killed, with priests and druids helping the chances of surviving.

Movement is categorized in abstract move spaces, with common base move rates translated. Starting distance is an abstract 2d6 move spaces at the start of combat and missile/ranged weapon ranges are codified by move spaces as well.

Combat works as follows: Both sides declare movements/charges, then move half the distance. Missile fire and spells are next and then, both sides finish movement and melee is resolved last.

Nice: Spells and their effect on the squad are codified in a brief table, which is good to see.

Editing and formatting are very good, I noticed no serious formal hiccups, though the rules of e.g. what to roll for DV could have been cleaner. Layout adheres to a no-frills two-column b/w-standard and the pdf sports public domain art. The pdf has no bookmarks, but needs none at this length.

Chris Kutalik’s skirmishing expansion for “By this Axe” makes for an intriguing little pdf – I actually liked this pdf more than its parent – mainly because I either want a hyper-detailed war-resolution OR a free-form mind’s eye solution. This pdf manages to be abstract, but actually doesn’t need minis, representing a synthesis of sorts of the two systems introduced in By this Axe. Speaking of which – this is intended, but it really pays off to read the parent pdf – without it, the system presented herein may seem a bit confusing.

That being said, the parent pdf is really inexpensive and this pdf is FREE. That’s a price that is hard to beat and allows you to check this pdf out without any risk whatsoever. Hence, my final verdict will clock in at 4.5 stars, rounded up for the purpose of this platform.

You can get this little system for FREE here on OBS!