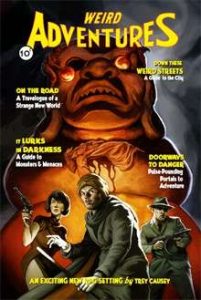 This massive sourcebook clocks in at 165 pages, 1 page front cover, 1 page ToC, 1 page editorial, 2 pages of SRD, leaving us with 161 pages of content, so let’s take a look!

So, what is this? Well, picture a setting, the Strange New World, that puts fantasy tropes in an era reminiscent of the interim between the two World Wars, as seen through the lens of the classic pulp magazines of old. The history of the world is thus somewhat akin to what you’d expect, though it should be noted than nice, poster-style artworks provide cliff-notes versions of what once was. It should be noted, though, that the focus of this book lies exclusively on the New World – which sees enough problems of its own with drought, etc., spiraling the country towards a great depression. The pdf provides notes on days and months, holidays, etc.

Race-wise, the Ancients brought the Black Folk to the new world before the arrival of the Ealderish, the Europe-stand-in, if you’d like. Natives and Yianese also make for obvious substitutions and feature twists that set them slightly apart from real world equivalents. A similar approach is taken for religion – old-time religions would be those based on variations of the montheistic writings; Oecumenical hierarchate practices religion more stringently and adds saints and the like for a ore Catholicism-like version. Beyond that, eikones exist – i.e. personifications of concepts and yes, pagan gods do exist. It is interesting to observe that this book does talk about the ramifications of the possibility of journeys to hell and heaven, respectively!

Magic follows roughly two different paths: thaumaturgy, which denotes basically the scientific/academic form of magic, while mysticism is more intuitive – somewhat akin to the divide between prepared and spontaneous casters, though rules-wise, there is no difference here apart from the extensively elaborated upon different social ramifications. The continent, just fyi, is fully mapped in color and from here, we embark on the gazetteer-section of the book, which provides an interesting look at the nations, sometimes with a wink and a smile: The US-equivalent would be the “United Territories of Freedonia”, for example, while Zingaro, the great Meso-American stand-in, mentions e.g. Sainted Mother Death and the like – we have magically icy winds in the north and little bits and pieces with crunch as well as plot-seeds galore. Have I mentioned the settlement Cuijatepec, where interred bodies mummify and walk the land (complete with a b/w-picture of a badass mummy mariachi gunslinger), deadly jungles, 10 sample ways to die in the deep – this chapter provides a nice “big picture”-view of the Americas in this setting.

From the big picture, we move inwards towards a tad bit more details, with the chapter “On the Weird Road” (nice Kerouac-nod there!), a chapter which goes into the details of the Union, including its currency (with fitting nicknames), explanations of the government and interesting twists – when e.g. monster-hunting paladins of great families inherit their father’s swords to their offspring. Arkham, including a famous asylum, can be found…and then there is the City, whose hegemony extends beyond the holdings of the Five Baronies – the City is vast and its constituents include an alien city with an unstable topography that may or may not exist at any given time, the gambling paradise (or hell) of Faro City, a New Orleans equivalent…and the smaragdine mountains…have I mentioned the rules for magical bootleg alcohol, a dwarven city, an infernal mafia or the dustlands, haunted by wrathful elementals? The monster-haunted Grand Cany…eh, Chasm, rushes for the Black Gold and the center of the entertainment industry, Heliotrope, home of the legendary gunslinger hero Big Jim Trane, who is sometimes riding a giant prehistoric cat. Occult feminism, cigarette-“ads” for djinn cigarettes – it is nice touches like this that manage to lend a sense of authenticity to the proceedings.

From this, we move on to the City proper, which, as mentioned before, is roughly separated into 5 baronies. It should be noted that the map here is functional, but pretty barebones, with the exception of the fully depicted Empire Island, which contains the Central park equivalent as well as TON of highly detailed locales and hooks: From the slums of Hardluck to the financial district, we run a wide array of themes and tropes, supplemented by random encounters (fluff-only). Inevitables haunt those that would resist the taxation or wish harm on the Municipal Building (fitting!), while being an exterminator in such a setting, obvious, is a rather dangerous profession. Also cool: Little Carcosa. Just figured I’d mention that one. 😉 Grimalkin village, ziggurats topped with Tesla coils, loan sharks and the race of barrow men ( CON and CHA +1, +2 to saves vs. poison, disease and contagion, can horrify targets with a variant of fascinate, penalizing saves), ghoulish undertown…have I mentioned the Lady of Amaranth Park, the airship dock contained in Grand Terminus, Dwergentown or the mysterious Mr. Nick Scratch? Or the degenerate, human-slaughtering eikomne? The charities that lord over the circus district?

Here, you can find phantom automats, meet gentlemen mentalists, realize that vampires are pretty much very dangerous addicts, go to “Sal’s Paradise, Jump!”, listen to magical jazz…and have I mentioned the area that now is straight out of The Magical Monarch of Mu (guess what that one is the analogue of…) or the theft of an elephantine colossus by notorious lich Hieronymus Gaunt?

The pdf also provides a variety of different monsters: These come with both ascending and descending AC-values, HD, number encountered and a general idea of movement rates (“fast flyer”, for example), allowing for relatively easy integration into a given specific rules-set. These include black blizzards, undead, illithid-like brain-invaders, crabmen, hitfiends (hilarious!), gatormen, living ghost-towns, hill-billy giants, living totems, lounge lizards, murder ballads that conceal themselves in songs, pink elephants (!!!), the Reds (agents of the underground civilization!)…and much more.

Editing and formatting are excellent, I noticed no significant glitches. Layout adheres to a two-column b/w-standard and the pdf has color maps that are decent and an amazing full-color artwork on the inside of the front cover. The interior-artwork is original and b/w and really nice. It should be noted that “advertisements” in the style of the 20s and 30s are littered throughout the book, adding a sense of authenticity to the file. The pdf comes fully bookmarked with nested bookmarks. I can’t comment on the physical versions, since I only own the pdf-version.

Trey Causey’s Weird Adventures did not have an easy standing with me. You see, I love the pulp genre and I love the fantasy genre. Thing is, I don’t think they mix well. At all. Similarly, I have read so many allotopias and near-earth settings, they tend to end up boring my socks off. In short: This is one book I would have never bought or read, were it not for my reviewer status.

Guess what? I’m honestly glad I did read this! You see, this pdf actually manages to properly blend the fantastic and the pulp genre without getting bogged down in Tolkienesque tropes. It draws from a vast wealth of knowledge and obviously careful research and its ideas go beyond winking “add fantasy” variants of real world phenomena, creating a world that is at the same time radically different and thoroughly grounded in our cultures….while changing them rather drastically. In short, this actually manages the nigh-impossible task of blending the two genres with panache aplomb. Now personally, I do not necessarily love this – but I am absolutely impressed by the depth of imagination and by the obvious love that went into this book. This is obviously a labor of passion and it shows on pretty much every page. It is very rules-lite, which makes conversion to pretty much any system really easy as well – and what more can you ask for? My final verdict will clock in at 5 stars. If the ideas even remotely sound like they could interest you, check this out!

You can get this unique campaign setting here on OBS!
Endzeitgeist out.