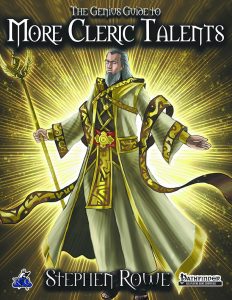 All right so let’s take a close look at even more options for the talented cleric! As has become the tradition with these, we begin with new edges and the very first one is already one we imho needed: Available at 5th level, it makes the cleric a cult leader in a twist on Leadership that interacts with spellcasting – at higher levels, followers can be targeted by range “you” spells and even deliver touch spells for the leader. I know I’ll be using the living hell out of this edge. There is another edge that completely redefines the very notion of “cleric” – Null Disciple. These guys, in the tradition of Malhavoc Press’ classic “Requiem For a God” or the BoVD’s Ur-priests, do not worship a deity, but in fact loathe them, stealing divine spells via touch attacks from foes, gaining the chosen spell as a SP. This completely, radically changes the scope of the whole talented cleric and further builds on the godless edge, providing the dimension of changed play-styles I was missing from the base book. Things get better: Being reincarnated, gaining boons from sacrificing to one’s deity…cool. Even cooler: Technology Priest, with full technology guide support and domain spells.

Beyond these edges, the pdf also features a metric ton of talents: Debuffs added to channel energy (with debuffs scaling according to channel energy talents taken), limited ignoring of DR for clerics utilizing the Destruction domain, quicker movement a limited amount of times per day, sacrificing victims to the Outer Gods, 2 mile radius of nicer (or worse) weather (oddly, slightly bolder text than other text herein), breaking the minds of those who fall into the cleric’s hands…there are a lot of cool options in this book. Challenge and counting as +1 size, hijacking symbols, tossing a coin to get a bonus or penalty to a roll, creating food ex nihilo, corrupting and redeeming others…pretty nice. Or what about adding an arcane mark via inflict spells that automatically grants the cleric death knell’s benefits if the creature dies? What about temporarily becoming a ghost at higher levels?

Very cinematic: There is a talent that builds on the challenge edge; when the target is defeated in melee, all allies within line of sight with less HD must check to avoid becoming frightened. (Nice balance re HD to avoid kittens!). Taking on elemental or draconic aspects are also options and all the channel-enhancing tricks now have representations within the framework of the talented cleric as well. Epic: High-level clerics may create funeral pyres for fallen allies, calling them forth as a weaker ghost that is not suffering eternal anguish, providing potentially a cool ally/cohort. Synergy with the mass combat rules employed in Ultimate Campaign can also be found. Clerics in tune with nature can do the green skin photosynthesis and clerics of trickery-based gods will most certainly love the option to conceal their magic auras – an ability much required at this point. Wind shields upgraded to hurricane force can help against the deadly damage output of ranged specialists. No-magic/rare magic campaigns will enjoy the talents that let you duplicate spells via the application of the Heal skill. Stepping through walls or doors, gaining a servant, making water unholy by a mere touch, tear spells apart by naming them and using spells of a higher or the same spell-level…oh, and have I mentioned attunement to weather or the option to stay young?

Yes, this pdf does have a ton of material and I have not even scratched the surface. And before you ask: The classic “”Save vs. Wall of Text”-box that helps organizing the content is included.

Editing and formatting are very good, though some sections look like their text is more bold than others in a peculiar formatting/layout anomaly. Layout adheres to Rogue Genius Games’ two-column full-color standard with dense text, broad borders and a grey background and the pdf features several solid pieces of stock artwork. The pdf comes fully bookmarked for your convenience, but do not expect individual bookmarks – only the chapter headers are bookmarked, which means you’ll be skipping through the pdf a bit. Slightly odd: The pdf features no new capstones and does not organize the talents according to the regular talent/advanced talents-line, which makes it slightly harder to navigate than usual.

Stephen Rowe is a beast of a designer. The fact that he actually managed to generate this file after the vast amount of work in the talented cleric, without being redundant…is pretty astonishing. More so, then, would be intriguing that some edges herein actually redefine the whole way in which the talented cleric can be played. Basically, where the normal talented cleric/warpriest is the more conservative and restrained take, this book would be where the creativity is let lose: The edges alone, even if you are not using the talented cleric, perhaps due to sharing my own gripes, are worth getting this pdf: Take them, recode them for your own purposes and simply be happy. That is not to mean that the talents aren’t great – they are and there is a TON of material in this book. AT the same time, while this book certainly ranks as one of the best “more talents”-type of books, it did feel like it fell slightly short of the absolute and pure awesomeness that is the pdf on more witch talents. While it pushes the boundaries in similar ways and offers more material, personally, I considered the witch book comparably slightly more intriguing.

This should be taken as me complaining at the very highest of level, though: While I will never be the biggest fan of the talented cleric/warpriest-file, I am very much a fan of this book and the cool options contained within. The writing is superb, but as a whole, the organization and talents aren’t as groundbreaking as the edges. In the end, my final verdict will clock in at 5 stars, with my seal only missing due to the accumulated nitpicks in layout etc. – my recommendation remains, though: If you need new cleric material and don’t care too much for the talented cleric, this still is a worthwhile purchase…which says a lot about Stephen Rowe’s talents. (Get it?…Sorry, I’ll punch myself for that later…)

You can get these cool talents here on OBS!