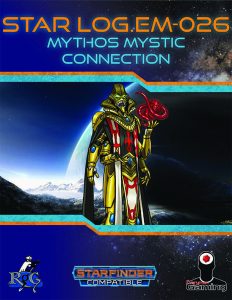 After a brief introduction, including the role of the mythos in the context of the Xa-Osoro system, we dive right into the new connection, which has Intimidate and Mysticism as associated skills. As far as the spells are concerned, it should be noted that you do require Starfarer’s Companion to make use of this supplement – all spells granted by the connection are drawn from that book. Annoyingly, none of them have been properly italicized.

The first level ability, contagious whispers, allows you to use the mindlink class feature with a range of 30 feet instead of touch. Additionally, the save changes from Will (harmless) to Will – as the mystic can project horrifying revelations to the target, rendering a target shaken and sickened for mystic levels rounds. This would be utterly OP, were it not for the 1/day per target limitation of the mindlink class feature. 3rd level nets you summon creature via the expenditure of 1 Resolve Point, with 6th level and every 3 levels thereafter increasing the spell level. Formatting here does sport a few minor hiccups: Spell-reference not italicized and a “See page $” remnant. As a balancing factor, you can only have one of these in effect at a given time – oh, and the creature needs to have the eldritch graft.

What’s that? Well, we actually get the eldritch summoning graft here, with traits differentiation between below and above CR 7. NICE! Big kudos for the graft inclusion here. The 6th level ability lets the mystic’s spells and powers ignore fear immunity, with targets instead gaining +4 to saves. Cool: This is further differentiated: Stronger creatures in relation to the mystic’s CR instead get a +8 bonus, preventing anti-boss abuse, and versus CR+3 or higher than mystic level, the ability ceases to work altogether. Additionally, Intimidate, if exceeding DC by +5 or more, may also ignore fear immunity, and once more, we get differentiated treating of this aspect of the ability. 9th level nets Adaptive Fighting, and eldritch creatures summoned via the 3rd level power get the Adaptive Fighting feat- Multiple creatures have to have the same feat. If you know summon creature, you may use Resolve to apply it to summoned creatures as well. The spell, once more, is not italicized correctly.

At 12th level, we have immunity to fear and mind-influencing effects, and all creatures linked in the telepathic bond get +2 (untyped – should be typed) to saves versus fear and mind-affecting effects. You also get a free telepathic bond with creatures called forth with the 3rd level ability – this does not count towards the maximum. At 15th level, all critters critically hit by you or a creature summoned forth are shaken for mystic level rounds, frightened if already shaken. This is a critical effect and thankfully thus explicitly excludes the option to stack it atop another critical effect. The 18th level power lets you 1/day spend 1 Resolve Point to execute a 10-minute ritual that may not be combined with Stamina replenishment. At the conclusion, you get an eldritch summon, save that it lasts for 24 hours. Thankfully, once more, this caps at one critter. The pdf also contains two new spells. Corrupt insight is a mystic spell for levels 1 – 6 and is pretty damn fun: It basically strips insight bonuses away and replaces them at higher spell levels with penalties, with 3rd spell level starting to pile a debuff on failed checks and attack rolls that feature the bonus type. This is really clever, and its higher levels are not simply an escalation of numbers. Like it! The second spell would be glimpse terror, which allows you to strike fear in the heart of lower CR critters by virtue of opening a pretty scary hole in space, from which…things…can be glimpsed, with key ability spellcasting modifier as a cap preventing cheesing of the spell.

Editing is very strong on a formal and rules-language level. Alas, formatting is weaker than usual for Everyman gaming, sporting a surprising amount of avoidable formatting hiccups. Layout adheres to the nice and aesthetically-pleasing two-column full-color standard, and the pdf has a nice artwork. It features no bookmarks, but needs none at this length.

Sasha Hall’s mythos connection wasn’t a pdf I looked forward to reviewing; for the most part, the mythos-class options often feel dull, and it’s very easy to phone them in. I am exceedingly happy to report that this is NOT the case here. With a pronounced consciousness of potential long-term issues evident, an intricate entwinement with the mystic’s rules and precise rules-language, the mythos connection actually is a really cool little supplement! From the graft to the spells, it is evident that the author cares – she has actually crafted a connection I’d not only allow; I do consider it to be a fun rendition of the concept. The reliance on the Starfarer Companion spells is not ideal as far as I’m concerned, but as a whole, I do enjoy this supplement. As such, my final verdict will be 4.5 stars, rounded down for the purpose of this platform.

You can get this cool connection here on OBS!

You can get the Starfarer’s Companion here on OBS!