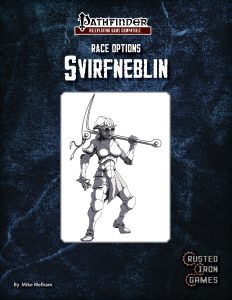 This installment of the Race Options-series clocks in at 9 pages, 1 page front cover, 1/2 page SRD, leaving us with 7.5 pages of content, so let’s take a look!

And now for something completely different – this time around, we take a look at expansion material for one of the arguably most powerful races for PFRPG, the svirfneblin. The racial properties of the race, all its traits etc. have been reproduced herein for your convenience and with SR, constant nondetection and similar tricks, it’s not hard to see why the race is often banned. That being said, this review will simply accept the significant power-level of the base-race and look at the new material herein, starting with alternate racial traits. We get a total of 8 of those and they range from an alternate hatred versus aberrations (represented as both atk-bonus granting and AC-improving traits) to applying SR to darkness and darkness-creating effects (interesting!). Losing skills bonuses for Weapon Focus (heavy pick), stability and a vanilla rage also constitute interesting modifications. I also liked a decreased SR accompanied by minor DR to account for a more fey theme. There also is an alternate, less lopsided attribute array, namely +2 Dex and Wis, -2 Cha, which also eliminates svirfneblin magic and fortunate…and actually makes the race more balanced, while retaining its core theme. Kudos!

The pdf also contains two archetypes, the first of which would be the Pick Master fighter, who replaces armor training with an AC bonus versus melee attacks when attacking with a pick at 3rd level; 5th level and every 4 levels thereafter net a scaling bonus to atk and damage with picks and 7th level provides the option to immediate action retaliate when an attack fails to hit the archetype due to the shield bonus granted by the special pick fighting training. 9th level sports something picks imho did not need – instead of weapon training, the critical multiplier for picks is increased even further. 11th level provides +5 ft. reach when wielding picks, but only for AoO-purposes when a target moves through the area and then adjacent to the pick master. 13th level allows for tripping and disarming sans AoO with picks and at 15th level, the bonus after attacking with a pick now extends to ranged attacks as well and nets Deflect Arrows. 17th level yields knockback blows with pick attacks and the archetype is locked into picks for weapon mastery. All in all, a decent weapon specialist with some mechanically-complex abilities that replaces all those armor/weapon training tricks with specialized pick tricks.

The second archetype would be the subterranean druid, whose name provides already a pretty decent vision of what to expect. The archetype receives Knowledge (dungeoneering) as a class skill and receives a variant list of spontaneous casting options that has a pretty nice stone/earth-theme. Nature sense is replaced with a modified underground version and 2nd level yields a stone-based variant of woodland stride and modifies trackless step to instead apply to the underworld environment. Instead of resist nature’s lure, +4 to saves versus the SPs and SUs of aberrations is gained and thousand faces is replaced with a variant of tree stride that instead employs stone as a medium.

The pdf also contains different pieces of mundane equipment – the first of these would be amorphofixate, a chemical that can rid adversaries temporarily of the amorphous quality of stabilize those whose forms have been destabilized. Cool. Depilatory would be the bane of all dwarves – the acid eliminates the hair of those hit directly by it. Want to piss off dwarves? There ya go! Very strong would be a special paste that reduced movement by 5 ft., but grants hardness 8 to the subject…but only until hardness is exceeded, at which point the shell crumbles. At 100 gp, this is not inexpensive, but it’s perhaps an item I’d keep out of the hands of PCs for the lower two levels…unless you have foes with serious damage outputs. The pdf also contains three variant picks – long pick, saw-tooth pick and throwing pick.

The pdf also contains a total of 8 racial feats, which include bonuses + /day rerolls versus emotion-spells, a serious bonus to a social skill when dealing with fey, slightly increased movement rate when traversing stone, a 1/day option to force a foe to roll twice to try to overcome your SR, a feat to count as +1 size when using Power Attack with picks, a feat that allows you to ignore squeezing penalties in stone (cool!) and a higher-level option to burrow through stone. One feat is problematic, namely a teamwork feat that lets you occupy the same space as an allied svirfneblin, flanking adjacent opponents – not only is this pretty strong for some classes, it unfortunately also has the issue of targeting, splash damage direct hits, etc. It should be noted, though, that this is partially due to the squeezing/multiple guys in one-square rules being pretty opaque.

The pdf also sports two weapon special abilities, the first of which would be impaling, which honesty represents scavenging gold – basically, you sunder as part of the attack and on a crit, the weapon becomes lodged in the target, inflicting damage until it is yanked out. At +2, reasonably priced and a great basis if you’re looking for a baseline to craft gritty “stuck in enemy”-rules for a campaign. The second ability would be stonebreaking at +1, which bypasses some stone hardness and deals additional damage versus stone creatures. Cool! Beyond these, we can find 3 specific magic items, the first of which would be the Caryatid Amulet is pretty cool – it yields DR that can temporarily be increased…and while in this state, weapons that target the wearer take serious damage. Damn cool and reasonably priced. Friendship Stones can be used to retain message-communication, but warn of betrayal as well and growstone solution can either create spike floors or soft stone. Cool!

The pdf closes with an array of 7 spells – these include imbuing crystals with electricity (making it easier to target metal-armored foes), an emergency brace versus cave-ins (awesome!), a spell to fortify stone, the secret message-passing enhancer group mind, the option to make potentially templated gargoyles from stone to do your bidding…and more. Particularly cool would be the spell to deal with burrowing creatures (stone ripple), that can also send non-burrowing creatures to the ground and there is also the work song – which obviously increases productivity or marching, as anyone who read Dickens knows.

Editing and formatting are very good, I noticed no significant hiccups. Layout adheres to Rusted Iron games’ two-column full-color standard and the pdf has a nice piece of b/w-art. The pdf comes fully bookmarked for your convenience – kudos!!

So, let me come clean here – svirfneblin are banned as PC-races in even my high-powered games. They’re very strong and pretty lopsided, hitting two of my pet-peeves for races, so I wasn’t too keen on picking this one apart. That being said, the alternate, imho better balanced racial traits contained herein come as close to fixing the race as I’m probably likely to get to see anytime soon. While I am not blown away by all components herein, with the archetypes being pretty conservative, particularly in the items and spells, this has some seriously cool gems. Oh, and it should be mentioned that some alternate racial traits actually manage to be somewhat innovative in the narrow paradigm they offer – which is a definite plus. In fact, I consider this pdf to be surprisingly good and captivating – Mike Welham shows his expertise by pricing feats, magic items etc. with deceptive ease. While I have a couple of minor nitpicks with some details, these ultimately pale before an otherwise fun and interesting setting -and the verbiage for impaling could, as mentioned before, potentially carry the piercing category of a whole no/low-magic campaign that emphasizes weapon type differences.

In short: Mr. Welham delivers a fun racial pdf, which, while not universally amazing, belongs to the better ones out there. Hence, my final verdict will clock in at 4.5 stars, rounded up due to the low and more than fair price-point.