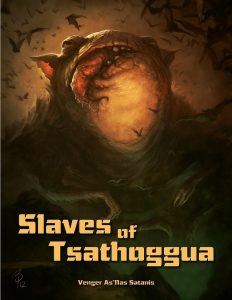 This adventure for Crimson Dragon Slayer (the new, d6-based version) clocks in at 16 pages, 1 page front cover, 1/2 a page editorial, leaving us with 14 1/2 pages of content, so let’s take a look!

So, we begin this pdf with a d20-chart that lets you determine how much of a peasant your character is: While some of these have minor in-game effects (like being a bad gambler), they also include living in a cardboard box, having dirt on even the dirt on you, etc. In short – this can make for a fun negative-bragging at the table: “Dude, my characters is so peasant, he only has *rolls* 3 teeth remaining!”

The PCs thus approach the little village of Needham, witnessing a strange funeral procession – the priest seems to have died and is now carted towards a cave…after all, anyone who has entered it will thereafter be brought back there for an eternal vigil. The 8 rumors similarly seem to speak of nasty things hidden there…but the road’s been long, the weather foreboding, so the adventurers will probably head towards the tavern…and here, a man is goaded into entering the cave…a fool named Atsop. Witnessing the sod enter and exit will net a nasty scene, as he exits, slime eating his body, slowly and painfully….and indeed a suicide hidden in the village’s vicinity similarly enhances the foreboding atmosphere.

…and this is about as far as I can go without going into serious SPOILERS. Potential players should jump to the conclusion.

All right, still here? Great! So, the main meat of the module represents a small dungeon crawl – the cavern complex is basically a ring of caverns around a strange machine, the scoop, which scoops up beings and deposits them inside the cave – as such, the numerous caverns to the sides of this central hub contain a variety of truly diverse encounters. The GM can resort btw. to a small d4-table to determine the desires of the respective creatures encountered. The planar instability also extends to the caverns – 12 entries of a table can allow the GM to make a cave Lovecraftian, icy, watery…etc. Similarly, a d30-table allows you to determine the weird insides of things the PCs may kill, slice open or dig into…ranging from endless bacon to small dolls with mysterious masks…so yeah, this is where the slightly gonzo weird comes in….but it retains a sinister streak. In short: It is a nice compromise between the gonzo Heavy Metal fantasy of the original Crimson Dragon Slayer and the darker aspects championed by the recent quick-play d6-based version in tone.

So that pertains the general dressing and environments – but what about the specific? Well, there would be Simon, a friendly tentacled diplomat from another dimension; there are silurians and zygothians, robots and plant monsters, faceless purple-skinned humanoids…there is a man with delusions of invulnerability, a horrible oracle who can employ emotional illusions and implant them within beings…but ultimately, in one of those side-caverns, the PCs will find a way deeper into the complex, past deadly insects and worse…oh, and if your PCs are idling, they’ll meet radical anthropomorphized fruit sooner or later. And yep, these guys have a mean streak. Anyways, the PCs will probably sooner or later meet The Thing. – a horrid and very powerful entity…and past it, there looms a nugget of cosmic truth, of genocides in the past and the looming return of dread Tsathoggua…

But even if the PCs manage to survive this meat-grinder of a module (the progressive bosses have A LOT of HP), there is a handy 20-entry-table to roll regarding PTSD for surviving this insane experience. These range from drawbacks to benefits to primarily roleplaying relevant tricks.

Editing and formatting are very good, I noticed no significant hiccups. Layout adheres to a nice full-color two-column standard and the pdf actually comes with a second, printer-friendly version – kudos! The pdf comes fully bookmarked for your convenience with extensive bookmarks and the b/w-artworks featured herein are amazing original pieces. The cartography by Glynn Seal is excellent as well, though I certainly wished we got a key-less version to cut up and hand to the PCs as they go.

After the revision of Crimson Dragon Slayer hit digital shelves, I wasn’t too blown away; the sample module is pretty much standard dark fantasy minus all the gonzo weirdness that made me like the original Crimson Dragon Slayer. This module would then be a synthesis of both approaches: This is very much dark and brooding fantasy and a grinder of a module, yes – but at the same time, it features quite a lot of thoroughly surreal and interesting components. The surreal aspects are more grim than before, sure – but at the same time, the module manages to sell them as both scary-weird and atmospheric, which is a feat as far as I’m concerned. In short: This is significantly better than the intro-module of for CDS’s revision and feels once again like it has its very own identity. Now the module may not be a world-shaking scenario, but for the fair price point, it certainly delivers an enjoyable session of gaming. So yeah, I don’t have significant complaints against this module by Venger As’Nas Satanis…and thus, my final verdict will clock in at 5 stars – If you want to play the new Crimson Dragon Slayer version, get this module to accompany it.

You can get this unique module here on OBS!

It is also part of the Trinity of Awesome +1 print book, if you prefer print. You can find that here!

If you enjoy this module, you may also want to check out the latest KS by Kort’thalis Publishing, which is funding the sequel to this trinity of modules. You can check that out here!