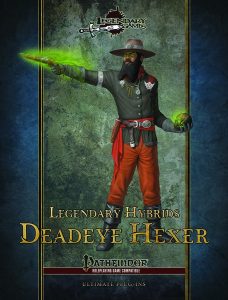 Hybrid classes – they can be amazing, but at the same time, they can be disparate entities sans unique mechanics…so what is the deadeye hexer? Well, first of all, he is basically a hybrid of the gunslinger and witch classes and gains, chassis-wise, d8 HD, 4 + Int skills per level and 3/4 BAB-progression, which is SMART: Firearms don’t need the gunslinger’s full BAB-progression. The class also receives good Reflex and Will-saves as well as Intelligence-based prepared spellcasting draw from the witch’s list, scaling up to 6th level. Weapon and armor proficiency-wise, they gain simple weapon and firearm proficiency as well as proficiency with light armors, which do not impede their spellcasting. As a minor layout complaint of an aesthetic nature, one sentence of the proficiency-write-up partially overlaps with the class table.

Somewhat akin to my own etherslinger, the deadeye hexer’s gun acts as a catalyst for his magical powers, doubling as a kind of familiar. Huge issue: The firearm familiar’s rules are supposedly found in Appendix A…which does not exist. The firearm familiar rules do exist, but yeah. Anyways, the firearm familiar receives scaling Intelligence, beginning at 6 and improving to 15 and similarly, its enhancement bonus becomes +1, increasing up to +5 at 1th level. 2nd level nets Quickdraw of the familiar, 7th improved empathic link and 13th the option to scry the familiar.

The deadeye hexer begins play with gunsmithing as well as a patron (9 of which are provided) as well as with a bullet hex. He gains an additional bullet hex at 3rd level and every 2 levels thereafter. Unless otherwise noted, using them is a standard action, they have scaling save DCs governed by Int and offensive ones need to hit the target. Missed bullet hexes do not count against the daily uses of the respective hex. 4 witch hexes are available (including slumber, with the cool tweak of inflicting nonlethal damage), but apart from that, we get only 6 such hexes for a total of 10…though thankfully, later levels also unlock major and grand bullet hexes, providing sufficient diversity and choice.

But what do the hexes do? Well, what about animate object via a bullet that hits a target? (Yep, only 1 in use at any give time.) Ranged bull rush via bullets? Yeah, pretty cool! As a full-round action, 15 ft.- shrapnel rain is pretty powerful, but action economy-wise somewhat justified…though I’d still include a minimum level for this one. At level 1, that is extremely strong. Concealment-granting clouds or whispering messages to bullets to warn others is pretty cool: In the latter case, you whisper up to 25 words to the bullet, fire in the air and its hits the ground near the creature, who may then proceed to read your message in the cracks formed by the bullet’s impact. Come on, that is very, very neat.

Major bullet hexes are unlocked at 11th level, with 5 being provided: Here, we have an upgrade of aforementioned AoE-attack, immediate action + class level dodge bonus to an attack 1/24 hours when shot at, bullets that burrow further into the foe or Freischütz-like bullets that may hit multiple foes at progressively worse +atk make for some neat choices. 5 witch hexes may also be chosen here. Grand hex-wise, 4 of the witch’s arsenal and 3 new ones are provided, with the ability being unlocked at 17th level. These include class level times d6 energy damage-causing bullets or hellfire bullets, which deal even more fire damage and linger, but only can affect a target once per day…or petrify foes.

Instead of grit, the deadeye hexer receives Mana at 2nd level, which acts in pretty much the same way and is governed by Intelligence and has full compatibility regarding grit, panache, etc. Deadeye hexers also receive, obviously, deeds at this level and may replace a deed with a gunslinger deed gained at a lower level. He gains 3 such deeds at 2nd level: One lets you cast a spell from the familiar sans preparing it, rerolling concealment miss chances and spending 1 mana to summon an unattended firearm as an immediate action to his hand, provided it is within 5 ft. per class level. 3 new deeds are gained every 4 levels thereafter: 6th level, for example, allows for concealment ignoring, potentially calling attended firearms and potentially using another hexer’s firearm with said characters permission…or even force the gun to cooperate. 10th level lets you auto-confirm a threat via mana expenditure (no mana-regain, though) as well as swift action reload and scatter shots. 14th level unlocks mana-expenditure to add + Int-mod to saves, free action reload and acting during a surprise round. 18th level nets a killing shot powered by mana, preventing a misfire as long as he has at least 1 mana and always acting during a surprise round – as you may see, these mainly represent linear improvements of the respective abilities.

4th level nets nimble, which also doubles as the exceedingly unsatisfying capstone of the class. You get Nimble +5 and one 6th level spell more. Hooray.

The pdf has 3 feats: The obligatory extra bullet hex, +2 mana and a feat that lets you target a creature with a bullet hex that can affect it 1/day only a second time.

The pdf also contains 2 archetypes for the class, the first of which would be the eldritch musketeer, who must choose either musket or blunderbuss as firearm familiar and any ray, cone, line or ranged touch attack cast through the familiar adds the gun’s enhancement bonus to the save DC as well as increasing the critical modifier of the spell, if any to x3!!! However, on a misfire or the target making a saving throw with a natural 20 (cool idea!), the gun first gains the broken condition, then detonates, though immediate action mana expenditure can prevent that in both cases – at 1 and 2 mana cost, respectively. This powerful ability replaces bullet hex. 3rd level allows for the sacrifice of spell slots to double critical threat ranges of the gun; one double for 2 spell level…or increase the critical multiplier by one. So yeah, you can sacrifice a level 6 spell as a swift action to upgrade critical multiplier to x7. URGH. Worse, I assume that casting spells through the gun that require an attack roll count as attacks for the purpose of this upgrade; at least the archetype does not explicitly forbid it. Do I really need to spell out how this exacerbates the issue of insane gunslinger crits and extends it to spells? Oh joy. The one thing the class or anything built upon the firearm chassis was a higher critical multiplier. Suffice to say, the hard spell limit does help, but still – this archetype will get nowhere near my game.

The second archetype, the hexslinger, modifies his proficiency to only cover one-handed firearms and must select a pistol as a fire arm familiar. Instead of deeds at 2nd level, he gets spell combat via the firearm, which is nice. Odd: The hexslinger still RAW gains Mana, which does exactly nothing until the higher level deeds are gained. 3rd level unlocks spellshot, allowing for the delivery of touch-spells via the firearm. 10th level replaces the deeds gained with greater spell combat.

Editing and formatting are pretty good, though, as mentioned before, there are minor type-setting hiccups. From an RAW-nitpicky perspective, the functionality of bullet hexes should be a bit more precise – RAW the 1/day caveat of hexes could have used clean spelling out, as one could argue either way. Layout adheres to Legendary Games’ two-column full-color standard and manages to cram a lot of content in the pdf’s pages. The artworks are a mixture of previously used and a new full-color piece – they generally are neat. The pdf comes fully bookmarked for your convenience.

Jeff Lee’s Deadeye Hexer does a lot of things right: the 3/4 BAB-chassis for the magical gunman is smart and makes the class work smoother regarding its math. The base class, apart from minor complaints mentioned, is well-executed. Personally, I would have loved to see more interaction between the hexes and mana, but that is primarily me and a matter of taste and as such will not influence the verdict. While I would have liked to see something unique for the hexslinger, the musketeer…is broken. Unless you really want a crit-fishing build from beyond hell, I’d strongly suggest disallowing it. Particularly irksome in the archetype is that both powerful options could be clearer in how they interact…or not interact, so even if x7 crit multipliers or tripled threat ranges before enchantments sound like a good idea to you (there are games out there that enjoy this type of thing, after all!), the archetype’s precision is lacking.

In short: I like the base class, but the archetypes feel like afterthoughts and drag down the pdf. My final verdict will clock in at 3.5 stars. This has all the makings of a 5-star class and if you only want the base class, you should consider this 4.5 stars, rounded down to 4 instead…but with the inclusion of the utterly OP eldritch musketeer, I can no longer recommend this unanimously. The lack of a rewarding capstone sucks. Still, the class does not deserve rounding down, but to have, of all things, bullet hexes not explicitly stating that they work with the same daily limitations as witch hexes is a big issue that actually led to a prolonged discussion in my playtest, so you should be aware of this component. My final verdict will still round up, if only by the teeny-tiniest of margins and because the class actually is not a hybrid that just smashes stuff together; the deadeye hexer has a distinct identity and playstyle I enjoy.

You can get this hybrid here on OBS!