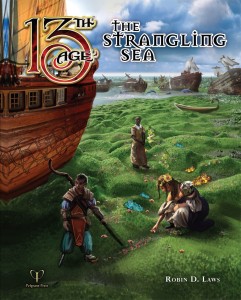 This was moved ahead in my review-queue due to me receiving a print copy in exchange for a critical, honest review.

We begin this module with a briefing and a selection of the icon patron for the PCs – and, let me state this from the beginning, this section is very detailed: Each of the patron icons and also, each of the antagonist icons you can choose to frame the narrative in, changes the subject matter in subtle ways – though arguably, I’d suggest involving the Dwarf King in some way – you’ll note why when reading the module.

And this is the extent to which I can get regarding the module without delving into the SPOILERS. From here on out, only GMs should read on – seriously, even when playing another system, you may want to move on to the conclusion.

All right, so it should come as no surprise that in a highly magical setting like the Dragon Empire, there sooner or later emerges a genius. In the case of the 13th Age, this Leonardo DaVinci-style super-genius would be Inigo Sharpe. However, the brilliant man takes “problematic” to whole new levels. What do I mean by this? well, the man has made a living out of solving (partially) the issues of an Icon and then getting the hell away, leaving shambles and large bills. Yes, he is not a nice guy and while the concepts his inventions would have had for the respective icons are massive, none work as intended/are completed – instead, this brilliant man elected not to put even more power in the icon’s hands.

This does not, however, change the fact that, at some point, Inigo had to jump ship time and again – and then, he vanished. At the behest of their patron icon, the PCs have to track down Sharpe..with the only good trail leading to Silver Cove and a burned former partner of Sharpe left to clean up one of his messes. Indeed, the mage Frigin’s dome soon comes under siege by some hoodlums, showing the PCs that they are not the only ones on the hunt for Sharpe. The annoyed and frightened mage does have a means of tracking down Sharpe, though – a concealed, magical boat that always returns back to its port of origin, to be activated via a peculiar song.

Thus, the PCs board the vessel, sing…and on it goes. The magical boat brings them right into the ocean, to be more precise, to the eponymous strangling sea. This would be a tightly-interwoven mat of Sargasso, fungi, wrecks and worse, all clumped together to form a floating, unstable place. Navigating the strangling sea’s less than reliable: One false step can see you crash through the ground and into the sea that’s teeming with lethal predators…and then there would be the inhabitants: The strangling sea features a tribe of degenerate, xenophobic goblins on the verge of becoming something wholly different and these beings, with their psionics-inducing parasites are just one issue. The other factions contain a group of shipwrecked people and a huge metal box, which is an experimental dwarven ship of metal. Oh, and there are, obviously, deadly parasites and flesh-eating fungi to be found here as well in one of the most unique iterations of this trope I’ve seen in ages.

Finding Inigo here is hard – particularly, since neither the paranoid, hostile dwarves, nor the other factions prove to be friendly: The PC’s arrival changes the strangling sea’s power-dichotomy, with their boat being a grand prize to be wrestled from the PCs…and the desperation and paranoia of the locals makes sense. Why? Because the strangling sea houses a malevolent, chthonic intellect that drives its inhabitants into desperation, paranoia and even suicide. Yes, darker than you thought, hmm? The brilliant rules-representation of the Strangling Sea, though, is what makes it shine even more: Basically, the Strangling Sea gets a kind of evil relationship die that can further influence PCs in ways most unpleasant. I expected the neat rules for swimming under the sea – I did not expect this awesomeness.

Better yet, the fully mapped sea (player-friendly, just fyi) retains the modularity promised by the set-up: You see, Inigo can be freely placed…and there’s a reason for this. The PCs won’t simply find the eccentric inventor – unless they are smart: You see, Inigo’s “death” was not just perfectly faked…he kind of died. However, he downloaded his personality and mind into a steampunky replacement body…of which only the head remains. So yeah, the goal here is to escape the strangling sea alive, sanity mostly intact, with a severed and still very conscious (and talkative…and extremely abrasive) head of a century’s genius… whether their ship is stolen or not, whether they reactivate the massive dwarven ship or not – one way or another, the PCs can hopefully return – to a final encounter that amounts to rugby/American football with Inigo’s head. And yes, this encounter, like each and every one in this book, has several cool, unique factors that make it more unique.

Editing and formatting are top-notch, i noticed no significant glitches. Layout adheres to 13th Age’s printer-friendly, elegant 2-column b/w-standard. The original b/w-artworks are copious and nice and the strangling sea’s map is neat. The electronic version is fully bookmarked for your convenience. The softcover version comes on glossy, thick high-quality paper.

All right, let’s cut this short: GET THIS! This is the 13th Age introduction-module you always wanted: Beyond the absolutely awesome location, the icon-related customization options and the story, this awesome sandbox offers unique, cool encounters galore. Even if you’re not playing 13th Age, the creative and well-written module practically demands to be converted into other systems: Robin D. Laws has executed a firework of high-concept awesomeness in these pages that render this a joy to read and the playing experience actually surpasses this still.

The unique use of 13th Age’s rules and the diverse selection of foes and scenarios render this sandbox one thing: Superb. If I had one complaint, it would be that I would have loved the module to be longer, for there to be even more madness and time in the Strangling Sea…so yeah. I literally couldn’t get enough of this. My final verdict will clock in at 5 stars + seal of approval and a must-own recommendation for any fan of 13th Age.