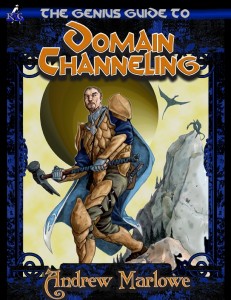 This supplement is 16 pages long, 1 page front cover, 1 page editorial, 1 page SRD, leaving us with 13 pages of content, so let’s take a look!

As has become the neat tradition with RGG-supplements, we kick off this pdf with a nice piece of in-game fiction before we delve into the concept – which, in this case, would be so-called domain-channeling feats. What do these do? Essentially, they allow a cleric to do different things, differentiate him/herself from other clerics by more than available spells, by using channel energy in different ways, depending on their chosen domains.

As an optional rule, it is suggested to allow for these feats to be available as a potential replacement for regular domain abilities – which, depending on the domain, could either be a no-brainer or a sub-par choice since the domain abilities aren’t balanced among themselves, but rather in the whole package. Personally, I’d advise against this suggestion, but since it’s just that, this won’t have any influence on my verdict – so let’s take a look at those feats!

First of all – thanks for catching that channel resistance applies, as per the rules, as a default always. Now let’s look at some of these effects, shall we? First of all – the respective feats all list their assigned domains and thematically fit their parent domain – e.g. the community-domain, which allows for the gaining of temporary hit points (without being abusable), while the liberation-domain allows channel energy to attack all shackles in range, damaging them and possibly breaking them – iconic, if a bit specific for my tastes, also, since shackles aren’t 100% defined – what about e.g. force chains and the like? And yes, I’m aware I’m nitpicky here – after all, rules for magical shackles are provided. The alignment-based domains can add minor +1/-1 buff/debuffs -that don’t scale. Sure, channeling is powerful, a Su etc. – but no scaling makes these rather lame; Come on, some scaling depending on basic channel dice (like some of these have!) would have actually made these interesting… as would DIFFERENT abilities. Essentially, they all do the same…which is nice, sure, but a more chaotic bonus (perhaps with a chance for a penalty or the like?) would have been nice for that one. Perhaps better buffs for the good domain, better debuffs for the evil domain?

The Travel-domain gets an interesting ability – channel teleport at 15 ft. +5 ft/2 channel dice teleportation as a swift action. OMG how op is that 11eleven… wait. This works…especially due to the caveat that the character can’t teleport through obstacles, essentially requiring free access to the target area (no teleporting through doors etc.) – with traps, hazards and even potential for AoOs also preventing teleportation, this one actually is STRONG (catch the healing cleric…), yes, but in a balanced way.

Other feats allow you to create a swirling wind to debuff ranged attacks with winds – this time scaling with channel dice (and coming with a caveat that it can’t be selectively channeled) – neato! What about making blast runes tied to channel energy? Elemental domains like fire net e.g. a fire-wave, while water later nets a rather cool drowning aura (that fatigues/exhausts, not utilizes the drowning rules – nice rules-wise, somewhat problematic re nomenclature). The Protection domain also deserves mentioning – DR 5/- for quite some time, but like stoneskin, dissipates after preventing 5 points of damage thus. The glory domain’s feat nets you a limited gaze attack for 2 uses of channel energy, while another feat allows you to generate a phantom ally to help flank adversaries and another allows you to shift attitudes for a chance at a truce after your PCs have once again annoyed the wrong NPC…and we ALL know that happens all too often…

Now the magic domain’s suppressive channeling is VERY interesting, working like a targeted dispel while the target is in reach -especially at lower levels, that might help (my players always save for the emergency dispel magic-scroll/wand at low levels…) immensely. SO yeah, powerful, but one of these YES-moments! On the downside, though, this is a potentially very dice-roll intensive feat…

It should also be noted that there’s a feat herein that allows you to change your channel energy into a 90 ft.-ray that requires a touch attack to hit, and more importantly, one that allows you to split the effects of channel energy between domain channeling feats and/or heal/harm effects. Another one allows you to shape your channel into either a cone or a line. It should also be noted that the pdf comes with a concise table of the feats, all at one glance.

Editing and formatting are very good, I didn’t notice any significant glitches. Layout adheres to RGG’s printer-friendly two-column, mostly b/w-layout with thematically fitting stock-art. The pdf comes fully bookmarked for your convenience. The pdf also comes with copious hyperlinks of the good type.

Divine channeling is the way to go to make clerics more distinct from another – as such, I LOVE this pdf for what it does. By taking one of the most under-developed abilities (option-wise), author Andrew Marlowe delivers a concise, cool little supplement I love in concept. However, the some feats herein feel a bit weak in direct comparison – most scale and while I can see an enhanced threat range not scaling (now THAT would be bad!), some others could definitely use an upgrade power-wise. There’s no per se broken feat herein, which is a good thing indeed. Now my frame of reference would be Rite Publishing’s Divine Channeler (which btw. features in my home campaign) – the Rite Publishing class is more focused on channeling and hence has stronger abilities and in direct comparison, the feats pale a bit – since with these feats, the cleric retains full spellcasting, that works, though – so yeah, no balance-concerns. On the fluff-side, the feats could have used unique visual effects like those of divine channeler, but I won’t hold that against the pdf either.

So…all in all, I want more of these – all subdomains or all of RGG’s exalted domains, for example! Andrew Marlowe did a great job, if not a perfect one and I hope we’ll see more channeling-feats to make this ability more versatile. My only true gripe remains that some of the feat’s effects don’t properly scale and that the 4 alignment-effects could have been more unique as well as the respective feats varying somewhat in usefulness – channel energy for undead prevention/temporary gentle repose or opening shackles? Don’t know. Then again, waves of fire, magic suppression? Yes, please! This pdf offers mostly great options, and hence my final verdict will clock in at 4 stars. Here’s to hoping we’ll get more!

You can get these cool feats to add some unique style to your channelers here on OBS and here on d20pfsrd.com’s shop!