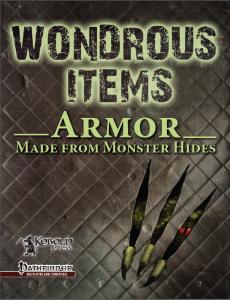 This pdf is 7 pages long, 1 page front cover, ~1 page SRD/editorial, leaving us with 5 pages of content, so let’s take a look, shall we?

So…items from dead monsters? Yes! No, seriously, this seems to be the series for me. Me? Because my players get next to no readymade treasure. They want a magic item, to craft magic items? Here’s the formula – go hunting those wyverns, collect those plants etc. And yes, that works and makes the PCs VERY protective of their favorite pieces of gear!

These now would be armor-pieces that aren’t magical per se – pricing-wise, light armors cost +400 GP, medium +700 GP and heavy + 1000 GP, +500 GP per special ability/additional quality – quick and dirty, but kind of fitting according to my math – not perfect perhaps – but, in my not particularly humble opinion regarding this case, you’re doing something wrong when trying to buy these anyway.

But what do we get? Well, 9 light armors. And the first one, assassin vine rope armor already sounds rather iconic and does something rather cool – counter-grapple, I.e. upon someone trying to grapple you, the armor gets a grapple-check against the target. Oh boy, where do I start? A) I *assume*, this is no action – does it interrupt the grapple attempt if successful? B) Does the armor count as having the grab-quality or the improved grapple-feat? If no, the attempt provokes an AoO – could this AoO be executed against the armor or also against the wearer of the armor? This would in turn modify the grapple-check with the respective damage as penalty… Either way, both would still be considered grappled. All of this notwithstanding…upon a success, both attacker and defender would get the grappled condition, with the attacker being (unless changed as per the rules) in the position to become the controlling grappler. Problem here being, that such a check would require a standard action. How would that interact with the armor? Could the armor’s reflexive grapple become the controlling grappler, allowing the wearer to potentially control the grappled character and benefit from this on his/her next turn? Or do armor and target count as different grappling entities? This armor’s idea is so cool, but oh boy do we need some clarification here!

Gnarlwood leaf armor allows the wearer to better hide in forested areas and also nets a DR 1/versus two of the basic weapon damage types – nice! Hell-hound leather armor with fire resistance, moon beast hide armor, a kilt made from unicorn leather or an armor made from vampire roses or a kython’s hide – the latter two dealing damage to targets that want to hit the wearer with certain attacks. Kython’s hide being essentially the more badass version of armor spikes (and not that useless), while the vampire rose armor can heal you – 1 point per 1d3 the armor nets you. This armor fails the kitten-test – take a bag of kittens along, rub it on the armor, instant, near infinite healing! Needs balancing…

We also get 8 medium armors – with cold-resistance and petrification-resisting amphisbaena scale armor, fly-check enhancing cloaker-mail, resistance-granting kirirn-armor – quite cool. Or what about an armor laced with disenchanter bones, which once per day suppresses magic weapon qualities upon being hit? The latter is a cool concept – but the lack of save against it is nasty. Also – how does this explain bows losing their enchantment upon shooting an arrow at the target? Should probably just be melee weapons…or needs clarification re ranged weapons. Gorgon Hide armor automatically petrifies the first weapon that hits it on a given day, netting it the fragile quality – interesting…however, it would be nice to know how to reverse that one – flesh to stone probably doesn’t cut it and the results for the magic item economy could be rather serious. Still, compared to earlier gripes, that is a nitpick.

We also get 4 new heavy armors, whether armor made from a witch tree or the pelts or aurumvoraxes, these are universally cool – nothing to complain here. It should also be noted that wearing a shield archon’s mortal remains is a damn fine entrance for villains…oh, and that each entry comes with DCs to harvest the raw materials.

Designer Jeffrey Harris has created a neat first installment of a series I am bound to love – it just aligns perfectly with my own tastes and mostly, the respective armors work smooth, well and are simply iconic and cool – and then there are the issues. There are quite a few glitches herein and items that would require caveats or clarification – while in the minority, these do weigh heavy on the little supplement and drag down what would otherwise be me going full-blown gush mode. I sincerely hope we’ll get a lot more of those, perhaps even a full-blown BIG BOOK! For this first installment, at least as long as the ambiguities haven’t been cleared, I can only settle on a final verdict of 3.5 stars, rounded down to 3 for the purpose of this platform.

You can get these interesting, cool, slightly flawed items here on OBS and here on d20pfsrd.com’shop!