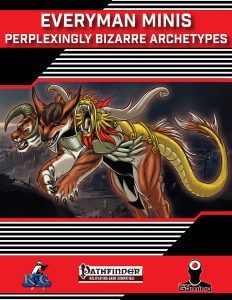 This Mini is exclusively available as part of the Klickstarter bundle. It clocks in at 13 pages, 1 page front cover, 1 page editorial, 1 page introduction, 3 pages fo SRD, leaving us with 7 pages of content, so let’s take a look!

Okay, so, let me take you on a brief journey – what you may not know: When archetypes first showed up, they were options available for all classes and pioneered by Super Genius Games, the precursor-version of Rogue Genius Games. When Paizo adapted the concept, they went class-specific with it, and the rest is history.

Why is this relevant? Because we have moved back to this concept herein, or forward towards Starfinder’s concept, if you will – this pdf contains a selection of multiclass archetypes that replace class features of one or more of the following levels – 1st, 3rd, 7th, 12th, 17th and 20th. We are breaking down every single one of the official paizo-classes, beginning with a list of the respective class features lost for these archetypes, and yes, this does include vigilante, occult classes, etc. With the very crunchy breakdown of these, the pdf provides the means for GMs to make informed decisions regarding 3rd party classes as well, which is something I very much welcomed. These are btw. precise and don’t break the base classes, so kudos there. It’s one of the design tasks that is tough and probably pretty unrewarding to pull off, so double kudos here.

Anyhow, let’s start with the first multiclass archetype, the chimeraborn. The chimeraborn’s base size is not that of a humanoid, but of a magical beast twice as long and eight times as heavy. The chimeraborn treat their creature type as both magical beast and base creature for the purpose of abilities such as favored enemy or bane (not itlalicized properly); minor nitpick: What about abilities that would be detrimental to magical beasts, but beneficent to the base creature? A caveat such as inserting a “detrimental” would have solved that ambiguity. In chimera-form, the archetype is one size category larger and has three heads – one of the humanoid, and two chosen from animals, dragons and magical beasts. The heads grant a natural attack of her choice among those listed, the senses noted in the head’s entry, and Skill Focus with a listed head’s entry. An animal head nets a bite or gore, low-light vision, scent and Skill Focus may apply to the physical skills such as Acrobatics, etc. The Skill focus may only apply to a skill the animal has. Dragon-heads net a bite attack, low-light vision and darkvision60 ft., and has a different Skill Focus list, and may apply Skill Focus on skills the dragon doesn’t have. Magical beast heads can choose bites or gore attacks, low-light vision and darkvision60 ft. and the same Skill Focus list as the animal head minus Survival, but without the caveat that the magical beast needs to have the proper skill.

The chimeraborn’s base form is nonhuman, increasing armor cost, and in chimera form, no prehensile hand-contingent operations may be executed. The archetype nets the change shape universal creature rule, and the humanoid form is consistent and has the humanoid head. In humanoid form, the chimeraborn loses the head benefits minus Skill Focus. This replaces the 1st level ability. AT 3rd level, the other heads develop distinct personalities, but share languages and mental ability scores; they grant a +4 bonus to saving throws versus mind-affecting effects, which increases to +8 at 12th level. 1/day, when failing a save against such an effect, the chimeraborn may shunt a mind-affecting effect into another head. This halves the save bonus (minimum +0 if both heads are affected) and the head’s benefits as noted in the entry. Spells such as dispel magic end the shunted effect as normal. At 7th level, chimeraborn gain an ability corresponding to one of three ability categories that the head’s creature has access to. These abilities are grouped in minor, major and supreme abilities and sport lists, but can be easily expanded based on the examples provided. Alternatively, a natural attack may be chosen, and all senses expand. At 12th level, two abilities may be chosen from minor or major abilities, and 17th level nets a third ability set, one for each head. The capstone yields more abilities as well as a +6 size bonus to Strength and +2 to Dexterity and Constitution.

The second archetype would be the Herald of the Puppet God, who replaces an Intelligence-governed skill with Perform (acting) as a class skill, or gain Skill Focus for it instead if that already is a class skill. The archetype may also use this skill as a Knowledge (religion) substitute for their deity. 1st level nets a puppet god that takes the form of a masterwork puppet; once it’s slid over the hand, it can only be removed by divine intervention, and thus, the hand may not be used for anything. It does grant a +4 shield bonus to AC, which improves by +1 at 3rd level and every 4 levels thereafter, which caps at +9 at 15th level. Wait. Shouldn’t that be +8? Or should that be 19th level as the cap? The archetype gets to choose one boon per day; there are 6 different ones, with each corresponding to one of the ability scores. These include getting 1.5 times Strength modifier to melee damage with puppet god-wielded weaponry, and increase base weapon damage to 1d10 when proficient with it. +1/2 archetype level to damage rolls, limited use advantage, i.e. roll twice, take better result, of rolls (or disadvantage (roll twice, take worse result) cancelation) – quite a few nice options. 3rd level nets a domain granted by the puppet god, and spells are cast as SPs. 7th level nets archetype level minutes per day where a second boon may be in place, with activation as a swift action, and at 17th level, instead of this, the character can choose divine vessel. 12th level further upgrades the base boons to have an empowered version that is paid for with the duration of the second boon option. 20th level makes divine vessel as at-will when using the second boon, and automatically empowers second boons. Yep, we actually have a fully functional OOTS-based archetype, and one that I consider to be actually interesting!

The third archetype would be the Isekai Avatar. These beings are folks from our world, actually savvy RPG-players, stranded in the RPG-world – they get 1 bonus skill rank that must be invested in Lore, which they can use to identify hazards or creatures, abilities such as feats, etc. – this replaces 4 skills, starting with Knowledge skills. The Isekai Avatar chooses two ability scores and gains a +1 insight bonus to AC, atk, saves and ability and skill checks, with all abilities based on the two ability scores chosen. For Strength, this increases carrying capacity, for Constitution, an additional Hit Point corresponding to the bonus. 3rd level and every 4 levels thereafter increase this bonus by +1. 12th level adds 2 further ability scores. These chosen ability score related components’ rolls may be rerolled 3+ Charisma (minimum 0) times per day. 7th level lets them choose an 11 when rolling on the d20, up to half archetype level times per day. 17th level nets a +5 inherent bonus to one such chosen ability score, and the capstone unlocks the benefits for all 6 ability scores, and adds a second score to gain the +5 boost, and these boosts may be reassigned every day. This is super-cool!

Finally, there would be the tyrannomorph, who gets Intimidate as a class skill, and one bonus skill per level that must be invested in that skill. The archetype gets Disguise to disguise themselves as a Tyrannosaurus Rex and may disguise as such as a standard action, with penalties due to size-differences halved and archetype level as a bonus to Disguise checks to execute this disguise. This costs 2 skills, one of which must be Dexterity-based; if Intimidate already is a class skill, one of the player’s choice is lost instead. The archetype nets a natural bite attack dealing piercing damage equal to a monk’s unarmed strike, and the bite may be used as a primary or secondary natural attack (properly codified!), and treats bite as a one-handed light melee weapon and natural attack. Furthermore, the bite may be adjusted with mundane weapon qualities, which is pretty cool! 3rd level and every 4 levels thereafter lets the archetype apply one of a massive selection of special weapon qualities, and e.g. sunder etc. also applies damage to weapon with the right quality. Complaint – these are not properly formatted. 3rd level nets a +1 enhancement bonus to natural AC that increases by +1 for every 3 archetype levels, to a maximum of +5 at 12th level.

Wait, what? It’s gained at 3rd level at +1; 6th level = +2; 9th level = +3; this means that 12th level should be +4 – or that it should be 15th level at +5. I assume the latter here. 7th level nets low-light vision and scent, or, if they had it, a bonus feat chosen from the list per sense. 12th level increases the Disguise check to assume T-Rex-form to a move action, and when doing so, the archetype can now self-buff, increasing size to a maximum of Huge, as well as improving AC. This is usable for archetype level minutes per day. 17th level further improves the means to increase size category to Gargantuan, action economy to a swift action and speed as well as Disguise boosts. Maximum duration per day also increases to 10 minutes per archetype level. The capstone is the final step of this progression, capping now at Colossal, and makes the self-buff at-will.

Editing is very good on a formal level and also on a rules-language level; apart from the two instances I noted (same glitch, really), this is fully operational in spite of its impressive difficulty. Formatting is tight on both levels. Layout adheres to the series’ two-column full-color standard, and the pdf has no bookmarks, but needs none at this length.

Alexander Augunas and Owen K.C. Stephens provide some true gems here – these archetypes are crunchy, radically weird and experimental in all the right ways. Outrageous and novel, on the content side, I loved this. The bonus cap glitches surprised me as a minor blemish, though it’s genuinely not one that influences balance in the slightest – or functionality. The +1 bonus does not break anything. And frankly, in light of how outré and novel the material herein still is, I couldn’t care less about it. Hence, my final verdict will be 4.5 stars, rounded up, and this does get my seal of approval.

You can get these creative, unique archetypes available for all classes exclusively as part of the bundle here on OBS!

If you consider my reviews helpful, please consider supporting my patreon or leaving a direct donation. Every bit helps, and it’s what keeps the lights on.