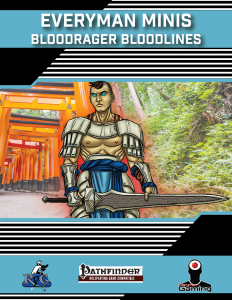 This Mini is exclusively available as part of the Klickstarter bundle. It clocks in at 7 pages, 1 page front cover, 1 page editorial, 2 pages of SRD, leaving us with 3 pages of content, so let’s take a look!

On the introductory page, we have a new feat, namely Bloodsurge, which requires bloodcasting and bloodrage as well as the option to cast one or more bloodline spells. While bloodraging, this lets you expend 4 rounds of bloodrage to cast one bloodline spell sans provoking an AoO, casting against your regular daily spell allotment. Also, while bloodraging, you increase spell save DC by +2 for bloodrager spells, which later scales up to +3 and +4, respectively, when getting the improved bloodrage abilities greater bloodrage and mighty bloodrage, respectively.

The pdf contains 5 new bloodlines, the first of which would be the accursed, whose theme is interesting – we have Accursed Critical and Improved Dirty Trick as well as Intimidating Prowess and feats based on being tougher as bonus feats, with curse-related spells among the bonus spells listed. The bloodline powers include limited use misfortune strikes, swift action demoralize and the option to make targets hit during surprise briefly shaken. High levels include rolling twice once per round on a variety of checks, and the capstone provides immunities versus hexes and curses as well as effects that would impose basically disadvantage – you know, roll twice, take worse result.

The axiomite bloodline features Power Attack, Expertise and things like Blind-Fight, with bonus spells including true strike, arrow of law, etc.- the abilities include the option to deal average damage. Then, the bloodline nets 20% concealment via swirling glyphs and crystalline runes; scaling electricity resistance and the ability to issue commands to constructs. There is an ability that lets you modify d%-rolls by up to 20, when e.g. using a rod of wonder (not in italics), and the capstone nets immunity to disease, electricity and mind-affecting effects.

The haunted bloodline provides Combat Casting, Ectoplasmic Spell and e.g. Skill Focus (Stealth) as bonus feat choices and features spells such as chill touch, fly and later, fear, as bonus spell options. The bloodline has a potent attack that represents aging and manifests as bonus damage – this bypasses Dr, but is limited, so I’m good with it for once. Ghost touch while bloodraging, scaling cold resistance and bonuses to saves vs. death effects. At 12th level, we can use telekinesis as an SP, and this may be used with Quicken magic, costing bloodrage rounds instead. Ability drain and quasi-incorporeal defenses complement the high-level abilities of this bloodline.

The protean bloodline is not simply a mirror of the axiomite one – it nets the fortification benefits while bloodraging, with the type of effect contingent on level. Blindsense, adaptive resistance and freedom of movement may be found as well. High level options include shapechange (not in italics) while bloodraging, and a second Fort-save and immunity to hostile transmutation complement this one. The bonus feat and bonus spell-selection are also nice.

Finally, there would be the underverse bloodline, which ties in with the amazing concept featured in e.g. the great Everyman Mini: Lost Children. The bonus feats include Dazzling Display (which may be used as a standard action while bloodraging, thankfully!), and from long arm to horrific doubles, I genuinely liked the bonus spell selection here. The bloodline starts with feat of fear benefits while bloodraging. Cool: This has limits that prevent the obvious abuse that would otherwise be possible. Bluff to feint and all intimidate checks are enhanced by the bloodrage’s Strength bonus, and at 8th level, combat maneuvers no longer provoke AoOs, and 1/round, you can spend a round of bloodrage to use a combat maneuver or demoralize/feint as a swift action. This ability is a game-changer that genuinely rewards tricky fighting. The high-level options include the options to strike foes and expend bloodrage to make targets reduce their age temporarily (cool!), and the high-level options include nightmare-ish aspects of the Underverse – a low-range black tentacles corona, and at 20th level, even frightful aspect while bloodraging. This is a cool one, as it genuinely made me want to play a character based on it – something that only few bloodlines have achieved.

Editing is very good on a formal and rules-language level; formatting is good, bordering on very good. Layout adheres to a 2-column full-color standard, and the pdf comes with a nice artwork. The pdf has no bookmarks, but needs none at this length.

Alexander Augunas delivers a cool array of bloodlines here. They will probably not all make you a bloodrager fan if you aren’t already one, but they offer well-crafted options and do some creative things with the bloodline engine. That being said, the underverse bloodline? Gold. All in all, a good pdf. My final verdict will clock in at 4 stars.

You can get this neat mini exclusively here as part of the bundle!

The awesome Everyman Mini: Lost Children can be found here!