Rise of the Drow Player’s Guide 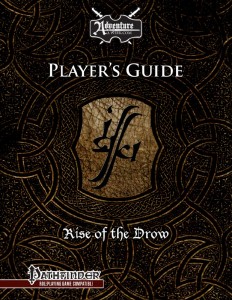 This supplement is 18 pages long, 1 page front cover, 1 page editorial, 1 page SRD, 1 page advertisement and 1 page back cover, leaving us with 14 pages of content, so let’s take a look, shall we?

All right, we kick this off with a discussion of AAW Games’ two major human ethnicities in this part of the Aventyr setting, the Klavekian colonists and the native Vikmordere – both coming btw. with basic skill-based modifications of the standard human standard racial traits that are applied in addition to the regular traits, with the Vikmordere getting to chose between 3 sets even. Now if you expect a Tulita/Colonists-dichotomy à la Razor Coast, rest assured that this one takes a more balanced approach – neither are glorified. What are the Vikmordere? Well…think Native Americans crossed with Vikings. Yeah. Awesome. One of Aventyr’s dwarven ethnicities, the Dweorg, is also depicted in detail, including once again a bit of minor crunch-modification – and yes, the races come with nomenclature, take on religion etc.

A short primer on underworld races is also included here, including a pointer towards the upcoming Underworld Races-books by AAW-games. The same goes btw. for the Underworld Classes-book that is referenced hereafter – essentially, the following nets players a break-down of some of the odd classes they will potentially encounter (from the latter book) and whets their palate for them – without giving away their respective crunch and nasty tricks. Or at least, the pdf makes it seem like this is what’s going to happen. Unfortunately, that’s not what happens. The Player’s Guide already is rather short. The classes and races noted (with minor exceptions race-wise) here do not feature among the opposition faced in Rise of the Drow’s antagonist builds. Players, upon reading these short, fluff-only lists, will expect to be able to use these classes or at least kill NPCs using them. That does not happen. This may be harsh, but what this is, is essentially a form of advertisement – nothing bad there, but it’s also false information since the classes don’t feature in Rise of the Drow. Why not instead provide some advice what characters should be able to do, which concepts would work well etc.? You know, PROPER player-advice? What about some legends about the underdark the PCs have heard during their stay in Rybalka? Wasted space and wasted pages here. Why not hint at the things to come, with legends helping PCs à la “There are rare mushrooms down there, glowing like the moon herself – I’ve heard you can do fabulous things and travel to the moon when imbibing them with alcohol under the starry sky.” (Partially true, btw. – you’ll see when you read RotD…)

Next would be a short player-friendly gazetteer on the town of Rybalka, with not only a neat one-page map, but also a stunning 1-page full color illustration of the place as well as an in-character prose piece that expounds the blacksmith’s take on the subterranean city of Embla, which will feature in Rise of the Drow.. It should also be noted that the section contains rumors and whispers galore and a list of basic underworld exploration equipment, complete with gp-prices and weight. The pdf also offers a primer that explains types of caverns and phenomena in the underworld as a means of immersion.

Editing and formatting are top-notch, I didn’t notice any significant glitches. Layout adheres to a two column standard and the pdf comes with quite an array of beautiful full color artworks – the maps and art combined with the layout make this pdf truly beautiful. The pdf comes fully bookmarked for your convenience.

The AAW-crew Stephen Yeardley, Mike Myler and Jonathan G. Nelson have created a per se neat pdf here – a mostly spoiler-free resource that introduces players to the dynamics of the mega-module and its setting, all without spoiling significant portions of the things to come – in that regard, it can be considered an accomplishment. It should be noted that, if you expect a player’s guide to deliver new mechanics or offer advice on how to create a character that perfectly fits (e.g. favored enemy/terrain advice etc.), this pdf does not deliver that, instead opting for a mostly fluffy introduction to the things to come in RotD. As a reviewer, I also feel obliged to mention that the list of underwold classes/archetypes might be considered minor SPOILERS for DMs or teasing/advertisement, so be aware of that.

If you don’t mind that, though, you’ll get awesome prose, a concise introduction for players and generally, top-notch production values here. The disappointed expectations regarding the classes and races teased here might prove frustrating though, and personally, for me sours the deal significantly. All in all, this player’s guide is nice, if not 100% required or for everyone, and hence my final verdict will clock in at 3.5 stars, whether rounded up to 4 due to the low price and high production values or down to 3 due to essentially providing quite a bit of advertisement (for class/race books to come), ultimately depends on the reader and what one expects from such a book. If you’re looking for a crunchy type of player’s guide, this won’t deliver. For me, the fact that the teaser may result in expectations of fighting certain classes not being fulfilled weighs heavy and could more than annoy some customers, hence I will round this down to 3.