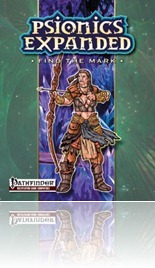 This first part of the “Psionics Expanded”-series/book from Dreamscarred Press is 29 pages long, 1 page front cover, 1 page editorial, 1 page SRD, leaving 26 pages, so what exactly do we get?

After the introduction to the material at hand, we are introduced to the update of one of my favourite 3.5-base-classes, the Marksman. Being a specialist psionic ranged fighter, the marksman gets d10, 4+Int skills per level, proficiency with most ranged weapons and light armour, full BAB, good ref and will-saves, up to 70 PSP and access to up to 4th level powers. Depending on your own preference, your marksman will choose from a style of ranged weapons that include bows, crossbows, thrown weapons and spears. Over the course of the marksman’s 20 levels, they get access to respective style talents that enable them to rain vast amounts of arrows down on their foes or become the quintessential sniper. While I do love the individual styles in their iconicity, I can’t help but feel that they are restricting in that, once chosen, no array of powers or talents is provided to choose from, making the class distinctly more linear than it ought to be.

After this new base-class, we take a closer look some new options for the psionic core-classes – psychokinticists can now focus on telekinetically pummelling foes, a new psychic warrior path is provided to make them archers and soulknives can now become soulbolts via a complex archetype that enables them to use a ranged form of their iconic trademark weapon. In order to offset some balancing concerns you might have, the soulbolt loses access to several blade skills of the soulknives, but can choose from 10 new blade skills.

16 new psionic feats are included in the deal as well and at first, I was rather stupefied by some of them: (Greater) Intuitive shot and Deadly Throw let you add your Wis and Dex-bonuses to damage with your ranged attacks as long as you’re focused. While the usefulness of these feats is somewhat diminished by working only within 30 ft., they still are wide open to abuse and personally, I’m wary of them. On the better side, there’s also a feat that lets you have your weapon return to you after being thrown and if you expend your focus, the weapons immediately return, enabling you to potentially make a full attack with one thrown weapon. Oh, and there’s a feat with concise rules for ricochet-attacks. Which rocks.

The last major section of the pdf is taken up by new powers and kicks off with the respective power-lists, including the new list for the marksman and most of them rock, as they expand upon class-abilities and in some cases, are even reliant on them, resulting in a set of rather complex connections and a feeling of organic wholeness that links the options provided by class-features with those provided by powers.

In case you’re looking for a new PrC, the Mystic Archer might be what you’ve been looking for: The class spans 7 levels, gets d10, good BAB, good ref and will-saves, 2 + int skills per level and give life to one iconic classic of fantasy: The Blind Archer. Gaining blindsense, tremorsense and even blindsight, the ability to expand their senses and unleashing inevitable strikes (as per the power), it is hard to hide from these mystics. If you’re playing in an Oriental campaign, this class makes for a great zen-archer!

5 new weapon qualities, specially suitable for ammunition and 3 new magical items round up the book.

Editing and formatting were very good, I didn’t notice any glitches that impeded my enjoyment of the pdf. The book adheres to an easy-to-read, printer-friendly 2-column standard and the b/w-artworks ROCK. The pdf comes with extensive bookmarks. On the one hand, I love this pdf, on the other hand, I’m disappointed. Let me elaborate: Most of the crunch is expertly-crafted and I love to see the Marksman find his way to PFRPG. What I don’t like, is that while Psychic Warriors, Wilders etc. all now have a wide variety of options, the Marksman is still very limited in styles to choose from and there is a distinct lack of transparency between the styles. If the approach of talents etc. would have been taken and more options provided, the class would be even better. Secondly, while I love the treatment the archetype-soulbolt got, I still would have loved to see a soulbow-PrC-class in addition to the archetype – after all, sometimes PCs want to learn certain things later in the game. That being said, my disappointment probably stems from extremely high expectations and is not entirely fair.

The (with the aforementioned notable exceptions) excellent feats provide an entertaining selection of cool new options and the new powers and magic items can be considered to be unanimously well-made. I do have another gripe, though: Where’s the psionic gunslinger? Seriously! I recall an excellent psionic duellist PrC in the deepest recesses of 3.5 and now, with the release of UC, support should be included. In fact, the lack of a gun-style for the marksman is another downer for me, as I always considered Roland of Gilead a multiclass Pala/Gunslinger/Marksman-type of character. I seem to recall that Find the Mark was released before UC, but in the final book, the option of including UC-support should definitely be considered.

While the pdf is still very cheap and I guarantee you won’t regret buying it, I can’t bring myself to rate this higher than 3.5 stars due to the accumulation of afore-mentioned, nit-picks and gripes. Due to the low price, though, I’ll round up to 4 for the purpose of this platform.

Psionics Expanded: Find the Mark is available from: