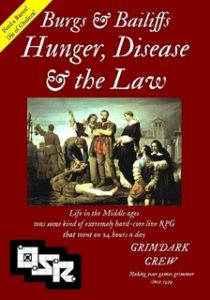 This little ‘zine clocks in at 28 pages of content, laid out for A5 (6’’ by 9’’) pamphlet-size; this number assumes you disregard the presence of a further reading list and an introduction explaining the genesis of this book – basically, a funny remark spiraled out of control: „Life in the Middle ages was some kind of extremely hardcore live RPG that went on 24 hours a day.“ From there on out, a mock-cover gave rise to what would become this supplement.

So, first things first: As you may know if you’ve been following most of my reviews (or due to your own knowledge and experience), most RPGs we play have precious little in common with medieval life, apart from aesthetics. The more apt analogue would be a late early modern period, where magic is substituted for technological advances. While there are “more” medieval settings out there, they are surprisingly few and far in-between, probably due to the realities of daily life and social structure being so radically different from what we consider to be acceptable.

Nobles were, for example, quite literally believed to be better humans, chosen by virtue of god; the church had a tremendous influence on daily life and many things we take for granted, like a theory on the spread of disease and rudimentary medical knowledge, were simply not there to the extent we expect them to be. Life in this era was grimy, often short, and death was a rather everyday inevitability that explains a lot regarding the need to believe in a better after-life. Anyways, this pdf is intended to give the capable referee the tools to increase how medieval the game feels, and does so via a selection of different articles.

This review is based on the at-cost print-version of the book, which is saddle-stitched, and costs a pitiful $5.64. The pdf-version is FREE, by the way, but does not sport the front/back-cover and, more importantly, has no bookmarks, which severely limits its appeal. Now, as far as systems are concerned, a significant part of the crunchy bits is intended for Adventure Fantasy Game by Lost Pages, which is not exactly my favorite OSR-game, to put it mildly. To be more precise, the content that uses it is intended for the base version of the game; the FIGHTMORE is not taken into account. That being said, the majority of the content herein is system neutral or uses a generally suitable OSR-terminology, ensuring a broader appeal. I will note below any instances where this is not the case. Got that? All right!

So, the first article herein was penned by Rich Wilson and is one of the crunchiest bits herein. Here, we learn about medieval tournaments. No, not jousting. We’re talking proper mêlée here! Unless you are pretty familiar with the period, you’ll get something out of this article, as it proceeds to explain the rise of such tournaments, the difference between fighting à plaisance vs. fighting à outrance, and generally can be considered to be an easy to grasp introduction to the subject matter. As far as immediate game-use is concerned, we get a series of questions to guide the referee in the process of creating their own tournaments, before diving into the nit and grit: From here on out, we receive rules for scouting out favorites, for the initial charge and a unique and surprisingly rewarding mechanic for simulating the chaos of a proper tournament mêlée, with encounters per turn, general difficulty levels, etc. Knowing when to take a breather, when to give up, etc. are important decisions here, and the structure of this generator can easily be extrapolated to other games. Fans of AFG will certainly appreciate the supplemental generator here that lets the referee create random knights on the fly, who also have rules-relevant flaws and boon; smart or particularly tough opponents , craven ones – solid generator here, though a supplemental name-list would have been nice. Oh well. The knight generator obviously will be less useful for other OSR-games.

Now, the next article is probably more broadly applicable: We are introduced to the trials of medieval times by Mike Monaco, who provides an easy to grasp little system that uses 1/3 of the Cha-modifier of the defendant, the level of the defendant and a CM, i.e. the crime modifier to determine the costs of such a trial. A simple d20 plus the calculated value noted above can be used to quickly determine the outcome of such trials, making the system painless to use. We similarly note rules for trial by combat and get a page that lists the most common of so-called ordeals, means to prove one’s truthfulness; you know, famously by fire, water, etc. Punishment, from fines to public humiliation to torture and execution are also provided, with mechanically-relevant repercussions noted. Stocks or pillory cause minor damage, while being branded causes damage and, unsurprisingly, reduces your Charisma, to note a few examples. This article is rather helpful and one of the stars herein – definitely worth reading!

Shorty Monster provides a 2-page discussion on the nature of bowmen, class and warfare and how they entwined – this article is system-neutral and is solid; all but dedicated history buffs will probably consider it to be at least somewhat enlightening. Lost Pages’ head-honcho Paolo Greco follows up with a no less interesting piece to ponder: namely the importance of food for the development of cities; sans agricultural surplus, they simply cease to be viable, and the article discusses the importance of farming vs. foraging for urbanization. The author also discusses obvious means by which these concepts can be used in gaming for adventures and hooks; It should also be noted that the author and Steve Sigety each provide a pottage recipe that you may attempt to try IRL. Nice!

Steve Sigety also provides the follow-up piece to the previous food-article, as we learn basics about medieval cooking and how radically different it had been for most people; in short, if you’re a bit of a culinary snob like I am, thank your stars that you weren’t born back then…All in all, another interesting article. Now, if you really want to embrace a rather grim, medieval game, you may want to take a look at Jeremy Whalen’s piece on pestilence: The ‘zine sports a disease-generator, which is essentially system-neutral: You roll a d20 for the number of symptoms and disease duration, with 3 entries each; after that 12 symptoms and 10 long term disabilities are provided. What’s that? Well diseases come in three severities, and each has a percentile chance of resulting in a long-term disability or death. 5 sample diseases are provided…and frankly, I really like this one! If you’re thinking about playing a game sans cure disease, this will certainly become handy. (It also is a nice tool determine the lethality of pandemics for NPCs, etc.) – handy tool!

The final two articles are also penned by Mike Monaco, and once more, we have a winner on our hands: Old school medicine for grimmer games will be pure amazing for e.g. no- or low-magic games. We discuss erroneous beliefs like humors, miasma, etc., discuss briefly rudimentary surgery…and then, we get a massive generator, where d12s can be sued to determine a diagnosis and prescription, with different treatments getting their own tables, each of which is similarly 12 entries strong. These include drugs, bleeding/blistering/emetics/purging and surgery…and yes, these procedures WILL make you cringe. Even before you read the side-effects. These btw. also tie into the gaming reality: A treatment may require a powerful monster part…nut then again, having a foul, boil-generating substance injected may actually net you a bonus for a while after the boils have been lanced…and you may well find a long-forgotten item in the chamber pot, if you’re lucky. This one was a real winner. Mike’s final article is the last one, and explains the concept of the night watch (not the Game of Thrones-version), which also requires a discussion of the curfew. A handy table lets you determine general night watch capability, their equipment and means to raise alarms, and finally, a table of 30 random urban and random wilderness encounters end the book on a solid note.

Editing and formatting are pretty good. I noticed no glaring issues on a formal or rules-language level. Layout adheres to a two-column b/w-standard, with historic artworks from public domain used here and there. The pdf, annoyingly, is not bookmarked, which constitutes a huge comfort detriment. Considering the nice saddle-stitched nature, glossy cover and at-cost price for the print version, I’d definitely suggest going with that version.

Paolo Greco, Mike Monaco, Shorty Monster, Steve Sigety, Jeremy Whalen and Rich Wilson have provided what clearly is a labor of love; considering the inadequacies of history-classes in school, this supplement will most certainly be enlightening for most folks; while it is proudly non-peer-reviewed, it makes up for this with its focus on immediate usefulness for gaming; the supplement never forgets its mission statement and the articles contained herein should prove to be inspiring not only for grimdark/grimy low-fantasy medieval settings, but it should also be considered to be useful for the GM when contemplating odd backwaters, certain plots, etc. Heck, there are plenty of interesting angles here that you may not necessarily have thought about; the thoughts about urbanization and agriculture, while something I was cognizant of, for example, were aspects I never even considered for their adventuring potential. This makes the ‘zine, at least for me, worthwhile indeed. If the topics I mentioned even remotely intrigue you, then download the pdf at least and take a look; if you like what you’re seeing, then you can get print for less money than what you usually pay for a pdf-adventure.

In short: This may not be for everyone, and the appeal is certainly not universal, but it is a little supplement that shows the passion of the contributing authors. Were this a regularly-priced ‘zine, I’d probably still consider this to be in the ~4 stars-region. However, taking the no-risk-for-the-buyer generosity of this supplement into account, I feel justified in rounding up from my final verdict of 4.5 stars.

You can get the pdf of this supplement here on lulu for FREE!

Want print? You can find that version here on lulu!