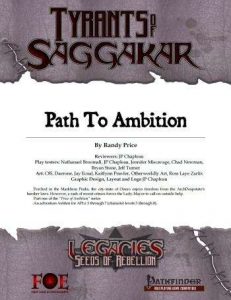 This review was requested by my patreons as a prioritized review.

Now, this is an adventure for characters level 3 – 8, intended for use with the Tyrants of Saggakar living campaign, and as such, the pdf comes with 2 pages of patron notes, depicting briefings for factions. A pretty big plus: The module also features a wealth of different handouts – no less than 7 player handouts are presented, and while they are laid out like a regular page of the module, with the big “Tyrants of Saggakar”-header at the top and no parchment for letters etc., we do get, for example, a “Wanted”-picture, which is a nice touch.

The module sports two GM maps, but no player-friendly versions of the surroundings. Location-wise, this module takes place in Onero, the City of Sin, an interesting location, where, in contrast to the rest of the setting, folks are enslaved by a metaphysical concept, rather than potent beings of social strata – it is a sin defined by its vices, its greed and apathy, a place of decadent, ruthless splendor, if you will; for more detail, you can refer to the sourcebook depicting the city and its vicinity, though this supplement is not required to run the module. The settlement statblock is btw. included.

Now, on the formal level, the pdf is actually surprisingly detailed: We get copious amounts of read-aloud text, as well as a finely-grained degrees of success/failure: DC-checks regarding lore etc. oftn have plenty of different lines for different values, which is a rather nice touch and something I’d very much enjoy seeing more often.

Rules-wise, the pdf presents minion and mob-rules, as well as the relevant NPC statblocks for APL 3, 5 and 7.

Now, in order to discuss this module, I need to go into SPOILERS. Potential players should jump ahead to the conclusion.

All right, only GMs around? Great. So, Onero is a free city state in a world of tyrannical houses – and so far, it has managed to evade the notice of the Great Houses, but this has changed when an agent of House Faremhi managed to intercept a letter between rebels and Onero’s council – worse, this news leaked, and now, the great houses sense easy slaves for the taking. As is wont in such cases, assassins were deployed, with one of these professionals, a man named Argoth, being quite successful indeed – two of the 6 senators of Onero have already fallen to his blade and the powers of his dark folk allies. Once again, as a professional, he does not leave loose ends…which makes a certain dark stalker and his kin a good scapegoat…and if a proper Patsy can be added, even better…

As hinted at before, the pdf comes with a remarkable amount of lore, like word on the street, etc., which can make for a nice reward for PCs doing their legwork. We join the intrepid adventurers, as they visit The Cage on the aptly-named Bloodsport Street. Yeah, told you the place was decadent, right? It is testament to the module’s details that PCs can actually challenge the champion – they have to remain just 5 rounds standing. Yes, this will not be easy…

Anyways, they are contacted by none other than Mayor Bani Mito, who hires the PCs to bring her the head of the assassin that has killed two members of the High Council so far – the City Watch’s stumped (and/or corrupt), so the PCs will have an investigation on their hands that will influence the course of Onero’s destiny. The details regarding word on the street and evidence retained remains and the pdf does provide guidance for the GM regarding questions that can be expected to be asked.

The investigation, as such…is remarkably interesting: There is a somewhat dark and interesting item that can help, the blood compass, but it is not strictly required to solve the module; during the course of the adventure, we visit the House of the Autumn Moon, a brothel with geisha-house aspirations, and the PCs may well get the item noted…or, well not. This sequence may be brief, but it is an interesting and atmosphere-wise nice section that reminded me of e.g. The Alienist, From Hell, etc. – urban, grimy and fun.

The trail, ultimately, will lead the PCs to the former keep of Tar Silfdar, five miles out of town, where a campsite speaks of occupants, where poisoned tapestries, traps and undead await. Cool: The Dark Folk can actually be communicated with, and the module sports quite a few, detailed lines, analogue in detail to the previously-noted investigation aspects. The leader of the dark folk, Moncius, may be negotiated with if defeated…did I mention the fungus farm? Oh, and the pdf ends with a great cutscene, wherein the killer has eliminated the Mayor…to be continued!

Editing and formatting are good on a formal and rules-language level. Layout adheres to a pretty printer-friendly two-column b/w-standard, with the Tyrants of Saggakar and FOE Entertainment logos as touches of color. Artworks are public-domain/stock pieces, but are pretty well chosen. As an unnecessary comfort detriment, the pdf lacks bookmarks.

Onero, as a city supplement, did show potential and was interesting, but did not manage to transition to awesome. This module, however, is different. The read-aloud text is an example of well-crafted prose, and it, in conjunction with the EXCESSIVE amount of lore information that capable players can unearth, make the atmosphere, the city, come to life. To the point where I really wanted to see more! As far as I’m concerned, the investigation through Onero could have been much longer, but yeah. Author Randy price delivers a creative, cool and atmospheric module here: This is grimy, glorious dark fantasy that feels almost Lankhmar-esque. As far as I’m concerned, this module’s prose is to be commended. However, the brevity of the investigation is somewhat lamentable, and the exploration of the dungeon-locale is imho slightly less compelling, though once more, the read-aloud text manages to convey more atmosphere than many comparable modules.

Now, this is only the first part of the Price of Ambition-series, but even if you’re not interested in running a series, it makes for a great adventure that can be run in a decadent city. As far as I’m concerned, it managed to make me excited for the series! The only downsides here would be the brevity (when the investigation could have carried so much more!) and the lack of bookmarks. Still, even with these detriments, I consider this to still be an inexpensive, well-crafted module – for the low asking price, you certainly get your buck’s worth! My final verdict will hence clock in at 4 stars.

You can get this inexpensive, neat little adventure here on OBS!