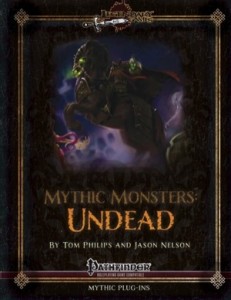 We kick in with a short introduction by Jason Nelson before delving into expanded versions of mythic spells related to undead – whether its mythic animate dead, lesser, a new augment for the mythic ghostbane dirge or size changing via sculpt corpse‘s mythic version – the 10 additions are nice and provide even adventure hooks and ideas here and there!

That’s not what you’re here for, though, right? So let’s take a look at the undead: The mythic Baykok (CR 11 /MR 4) is the 7th version of the Baykok for a d20-based game I’ve seen, so it better live up to its dreadful reputation…and it does. Hail of arrows versus all targets within 110 feet? Yeah. Add paralyzing howl and arrows to the mix and we get a truly deadly, nasty foe and one of my favorite iterations of the creature so far. Have I mentioned that these guys can spend mythic power to make slaying arrows? Yeah…frightening indeed!

The Mythic Demilich at CR 17/ MR 7 may not be on par with what these guys once were (and ought to be!9, but at least it’s closer than the neutered default PFRPG demilich: Adding the good ole’ crumble to dust-effect to wail of the banshee, for example. The Cr 13/MR 5 mythic devourer gets a negative level-inducing AoE-breath weapon that even staggers on made saves (OUCH!) and can permanently destroy souls and fuel crackling waves of negative energy with said essence. Nasty! Now the one I’ve been most excited about in here would be the CR 9/ MR 4 mythic dullahan – whether via placed, penalty-inducing markers or a paralysis-inducing gaze, these guys are deadly and cool – alas, Rite Publishing’s Headless Horseman-template imho delivers the slightly superior version here, with the nigh unkillable aspect and rp-based ways to exploit the creature as well as supremely deadly melee making for the more deadly adversary. The provided artwork (which also includes the next creature, the CR 10/ MR 4 Mythic Mohrg) is awesome, though. Mythic Mohrgs may use mythic power to confirm crits and unleash massive,, extremely deadly circles of death – and even the non-mythic version of this spell is nasty, as 3 dead PCs in my current campaign can attest. Especially cool since it thematically enhances the mass murder-aspect of the mohrg’s origin lore.

CR 2/MR 1 mythic ghouls and their CR CR 3/MR 1 ghast-brethren get the option to spend mythic power for faster coup-de-graces and also receive a paralytic aura. I wish the ghast had a unique ability, but oh well. The CR 2/MR 1 pickled punk may now turn to stone and temporarily turn hard as stone – also getting the option to flat-out negate attacks via mythic power, rendering this being a very interesting adversary at low levels. CR 9/MR 3 mythic spectres get a cool, iconic ability – dealing damage by moving through living targets. Their aura of desecration is nice as well, if nothing to write home about. The mythic wight at CR 4/MR 2 btw. also gets this aura, but no other unique signature tricks.

More interesting would be the Mythic Totenmaske (in case you wondered – that’s German for Death Mask) at CR 9/ MR 3 may use mythic power to instill a permanent staggered condition due to ennui on targets drained of charisma. Much cooler – the creature can actually make use of the senses of those subject to its flesh-shaping and dominate its victims. Neat and so full of story-telling potential…

The CR 11/MR 4 Witchfire may cause its cursed flames to actually BURN the targets (amen…that one was overdue from the base-creature…) and foes attacking the creature in melee constantly risk catching the cursed spiritual fire…nice! Have I mentioned the ability that lets the witchfire use mythic power to automatically hit and inflict max damage (ref save halves)? Yeah, OUCH! The Wraith at CR 6/MR 2 surprisingly gets some very cool abilities – a shroud of darkness that negates the vulnerability to sunlight while also dealing cold damage and the ability to inflict con-bleed damage on hit targets.

Now the Mythic Monster-series usually has its climax at the end with the new creature and this time, we get the CR 12/MR 5 Jigsaw Man – no, these guys do not catch people and put them through strange tests, they are called thus because they’ve been quartered for being serial killers – with their fractured anatomy, they can use mythic power to completely negate attacks, disassemble into a swarm form as well as a particularly lethal, rusty blade – that turns into an instrument of swift death in the hands of the jigsaw man. (In case you need a neat idea how to effectively scavenge this guy’s rules- slap a ninja-level or two on of these, a add some telekinetic-focused psion-levels/psi-like abilities and you have a great representation of Metal Gear: Revengeance’s Monsoon…)

Editing and formatting are top-notch, I didn’t notice any significant glitches. Layout adheres to legendary Games nice 2-column full-color standard. The 2 pieces of original full color artwork (one being the new creature) by Ivan Dixon and Steve Wood are awesome. The pdf unfortunately comes sans any bookmarks, making navigation less comfortable than it ought to be.

Jason Nelson and Tom Philips deliver an installment of Mythic Monsters that has some true stars – the new mohrg, the baykok, totenmaske and wraith are all damn cool, and, as almost always, the original, new creature is superb. That being said, the ghasts for example, and to a lesser extent, dullahan and demilich just didn’t feel that much improved to me – perhaps because I’ve seen too many versions, I don’t know. These got me all stoked up and while there’s nothing wrong with them, they are pretty conservative takes on what you’d expect from mythic versions of them. Don’t get me wrong, that does not make them bad, but it also makes them not as awesome as their further enhanced brethren herein. Generally, this book feel like it’s situated on the upper edge between good and awesome, but the lack of bookmarks as a serious comfort detriment makes me round down – my final verdict will clock in at 4.5 stars, rounded down to 4 for the purpose of this platform.

You can get these Undead here on OBS and here on d20pfsrd.com’s shop.