Convergent Paths: Clerics of the Cloth 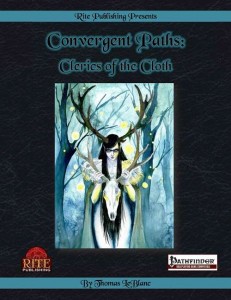 We kick off the pdf with a simple archetype – unarmored clerics. These guys don’t get the proficiencies with armors or shields, but when not heavily encumbered and unarmed, they get wis-mod to AC and CMD, also applying the bonus when flat-footed and against touch attacks. When under fear-related conditions or confused, these bonuses are negated and they don’t stack with other wis-to-AC-abilities. Generally nice, if a bit weak – especially at medium to high levels, an additional benefit could help.

The Devout Exemplar archetype loses armor and shield proficiencies and only gets one domain. Instead, they get the ability to blink to the deity’s plane for 3+Wis-mod rounds per day, phasing rapidly between the deity’s plane and the prime material. In the after math, the exemplar is fatigued for 2 rounds per round spent phasing. While phasing, the exemplar has a 50% miss chance and even this chance to be missed by targeted spells. They also have a 20% chance to miss themselves, which extends to their own spells. While phasing back and forth, they take only half damage from AoE-effects, falling etc. and they may even interact with potential creatures on that plane. Blind Fight doesn’t help against phasing, but dimensionally locking the exemplar does. At high levels, the exemplar may stay on the deity’s plane. Starting at first level, they also choose one of 3 training regimens – strength, speed or stamina. This supersedes the usual praying for spells and additionally an ability at 2nd level and every 4 levels thereafter. Beyond the general benefit of the regiment (like using class level for CMB regarding one maneuver chosen per day), these include lessened penalties for age, wis-mod to CMB 1/day/creature, vastly increased thrown weapon range (but lost str-bonus beyond increment 5), better climbing or more carrying capacity, to name a few.

Exemplars devoted to speed can tumble via acrobatics at full speed at half the penalty, get better reflexes or no penalties when in tight conditions etc, while stamina training helps with armor check penalties, can lessen fatigue incurred by their blinking (or rage!) and also gets a recovery trance that lets them reroll fort-saves at +2, potentially even negating the initial failed save. The latter is a tad bit too strong for my tastes since it retcons the initial effects and has no limitation apart from one roll per condition per 24 hours. Each regiment also provides a +2 capstone-bonus to the attribute of their regime at 20th level as long as they maintain training. Finally, they get a +1 dodge bonus to AC while wearing no armor/shield, scaling up to +5.

Next up would be the Missionary Priest, who also get wis-mod to AC/CMD (with same caveats) and a studied creature type (somewhat favored enemy style), but with more focused on social/knowledge skills. These races also determine when the missionary’s special abilities kick in – these are linear and offer no selection, allowing for additional AC-bonuses, 5-foot-steps, use aid another vs. AC 20 to negate AoOs and finally, faster coup-de-gracing. I like the idea here, but the execution feels a bit too linear and could have used a bit more variety.

The next archetype would be the Sacerdos (plural Sacerdotes). These also get the AC/CMD-bonus in lieu of armor/shield proficiency and at 2nd level and every 4 levels thereafter, these guys and gals learn a sacred rite, which can perform as a full-round action that incurs an AoO – unlike regular channeling. Each rite allows the Sacerdos to replace a set amount of channel dice with another effect, which lasts for one round unless otherwise mentioned. Only one rite may be used to modify one channel attempt (unless you take the new Augment Rite-feat), though the rite can replace all channel dice, thus cancelling the standard (or variant) channeling effect the act would usually result in. The channel effects can improve/hinder critical hit-confirmation, render foes blind/dazzled, grant energy resistance and a whole slew of other cool, tactical options. All in all, one damn cool archetype, though I wished it had much, much more rites available – for more versatile builds. This one’s definitely a candidate for a full-blown pdf of its own – perhaps with divine channeler-synergy?.

The new feats allow the respective archetypes to e.g. wilder in other training regimes, get more rites, target creatures excluded with selective channeling with other effects, partial access to (sub-) domains etc. – some coolness in here, especially if you wanted more synergy with variant channeling – all the metamagic fun etc. is in here – at times balanced by e.g. staggering you or in the case of maximizing the effect, limiting the channel to you. One feat hit a pet-peeve of mine – as a swift action, it buffs your weapon and makes it aligned, which is very strong – especially since the feat has NO LIMITS. Some generous, but existing limits or the alignment effect coming it at higher levels would be very much prudent in my book.

Editing and formatting are very good – I noticed next to no glitches and those I found were typos and didn’t impede my ability to understand the content. Layout adheres to RiP’s old two-column full-color standard. Artwork, as far as I could tell, is thematically-fitting stock art and the pdf comes fully bookmarked for your convenience.

Thomas LeBlanc is a talented designer – when I read this, I expected yet another slew of uninspired cleric/monk rip-offs, but instead, he delivers! The Divine Exemplar’s blinking, the Sacerdotes and their rites – I love those two to death (they could imho carry their own books each – and would deserve more fodder!) and the channel-themed feats are also nice additions to the game. I was quite disappointed by the missionary, and I do consider some minor pieces of crunch to be somewhat problematic – these remain the absolute minority, though. In the end, this pdf misses the 5 stars only by a margin, resulting in a final verdict of 4.5 stars, rounded up to 5 due to the low, fair price and the nice fluff that kicks off each feat, each archetype. Now when do the exemplar and sacerdotes get more tools?

Youc an get these cool archetypes here on OBS and here on d20pfsrd.com’s shop!