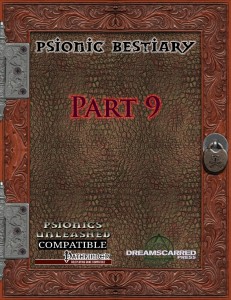 The 9th part of the Psionic Bestiary is 10 pages long, 1 page front cover, 1 page editorial, 1 page SRD, leaving us with 7 pages of content, so let’s take a look!

We kick off this mini-bestiary with a new CR 5, tentacle-mouthed monstrous humanoid with emergent brain lobes, the Brataurus, who can emit wis-damage dealing screams and worse, they actually feed on said damage, healing themselves. Cool!

The CR 3 Dedrakon, a scaled predator that adds crystal shackles to their prey via their attacks, which increase in movement-hampering potency the more creatures are shackled with them – oh, and they can emit roars to paralyze shackled foes on a failed save – throw these in groups, add some hit and run-tactics/feats and watch them squirm. And yes, the base creature is inspiring enough for me to actually do that.

At CR2, the 3-eyes lizard-like Dulah-humanoids have a nice ability – they can barf their treasure at foes! Since my version of the dire beaver barfed splinters at foes, yes, I do like that one!

At CR 6 and 8 respectively, the Ensnared Earth Elementals and their Greater cousins are glorious – part elemental, part plant, they may strike through stone and ground those nasty fliers with psionically chargeable pulses of gravity! Awesome!

At CR 2, the somewhat ferret/cat-like Ferax have some nice minor psi-like abilities and can emit bolstering hums. Finally, at CR 3, the bat-like, winged, one-eyed Reva can manipulate objects, target foes with force damage and are superb spies indeed that can detect sentient, sapient life-forms. Nice spies for the BBeG – or your PCs, for these “builder bats” are actually LN and rather intelligent!

Editing and formatting are good, though I did notice minor typo-level glitches, nothing rules-problematic. The pdf adheres to DSP’s 2-column full-color layout, with bookmarks being there, but broken (and unnecessary at this length) and the artworks for the creatures, all in full-color, being simply WEIRD and awesome. Add to that the lack of glaring glitches in the math – and we also get in that department, one damn impressive little bestiary!

Authors Jeremy Smith, Andreas Rönnqvist, Dale McCoy Jr. (commander in chief of Jon Brazer Enterprises) and Jade Ripley deliver a bunch of psionic creatures that are just fun – each one coming with at least one cool signature ability and production values to supplement their unique abilities as well as with the more than fair price point, this bestiary can be considered 5 star material indeed – which also reflects my final verdict, omitting my seal only by a margin.

You can get this nice little mini-bestiary here on OBS!