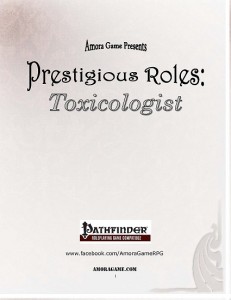 This pdf is 6 pages long, 1 page front cover, 1 page editorial, 1 page SRD, leaving us with 3 pages of content for the new PrC, so let’s take a look, shall we?

The Toxicologist needs to be non-good and have 5 ranks in Craft (alchemy), sleight of hand and stealth, 3 in heal and need to have poisoned an unsuspecting victim and made friendly contact with a poison-selling apothecary. Got that? Okay, then you qualify for a PrC that nets you d8, 6+Int-mod skills, proficiency with light armor and blow guns, 3/4 BAB-progression and 1/2 fort- and ref-save progression. Toxicologists never risk poisoning themselves, create poisons at half the time and may apply them as a move action (later even as a swift action). They may even change the delivery method of poisons and make e.g. ingested poisons contact poisons – which may be problematic, since method of delivery more often than not makes for a balancing factor in a given poison’s potency. The pdf mentions the Craft (poison)-skill, here, though – which does not exist. This ought to be Craft (alchemy).

The toxicologist is also great at blending in in crowds (making for great assassins from the stands!) with bonuses to disguise in crowds – just a pity that the ability does not extend to stealth – sniping unnoticed from the crowds would have been cool – as written, the Toxicologist gets one shot and then is exposed. They also learn to increase the DC of their poisons, can purchase them at less cost and delay their onset as well as negate them via int/level-checks. The PrC also gets sneak attack progression (+4d6 over 10 levels). At first level and every 3 after that, the class learns a specialty, which include poisons that last longer than one hit etc. Special mention deserves the theory of opposites – allowing them to make poisons into buffing items instead – but still risky to imbibe. While potentially rather powerful, abusable and a bit wonky in wording, I do enjoy this idea – especially due to negative conditions balancing the effects in the aftermath. Toxicologists may also learn to extract organs, preserve them and distill poison from them or lace alchemical items with poisons – the latter imho requiring a caveat to not work with some class features of the alchemist-base-class…

At high levels, toxicologists may blend poisons and true masters may, as a capstone, generate lethal poisons from their own body.

Editing and formatting formally are good, though some of the rules-languages could have used a tighter wording. Layout adheres to a printer-friendly two-column standard and the pdf comes sans bookmarks, but needs none at this length.

The toxicologist-PrC is on the one hand a great little PrC to make poison-use more viable, but it does suffer from some hick-ups in the rules-language – while none of them are particularly nasty, they do accumulate. Author Christie Hollie has delivered a nice PrC and indeed shows some talent here – with minor modifications, this PrC can make for a neat addition to one’s campaign. Oh, and it’s just 1 buck. For the very fair price and the nice concepts herein, I believe that, in spite of its flaws, I can still round this up from my final verdict of 3.5 stars to 4.

Youc an get this PrC here on OBS and here on d20pfsrd.com’s shop.