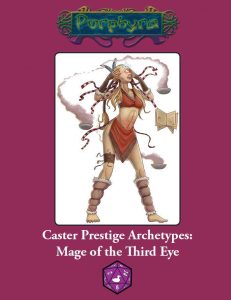 That out of the way, let us take a look at the class herein, with is built on the chassis of wizard and the Mage of the Third Eye PrC, with d6 HD, 2 + Int skills per level, with d6 HD, 2 + Int skills per level, full spellcasting progression, good Will-saves and 1/2 BAB-progression. Proficiency-wise, they only get club, dagger, dart and quarterstaff. They inherit the wizard’s Scribe Scroll feat at 1st level. 4th level yields access to wizard school powers of any school of magic – he may choose a single arcane school SP with daily uses equal 3 + Int-mod uses; however, instead of this cap, use costs one hand pool point – more on that below. 8th and 12th level yield new school SPs that adhere to aforementioned paradigms.

Now, what’s this hand pool? This pool refreshes upon preparing spells and nets 3 + 1/2 class level + Intelligence modifier pool points. Expending one point from this pool as a standard action makes a melee weapon fly instantly to a target within 30 ft. and attacks it, before returning to the mage. The attack is treated as a ranged attack, but is not governed by Dexterity, but by Intelligence. Combat maneuvers may not be performed at range.

2nd level yields +1/2 class level to Spellcraft, with 3rd providing Craft Wondrous Item and 5th yielding Craft Construct as bonus feats. Starting at 6th level, the class gains access to the option to expend a hand point to open the third eye for a minute. This provides +1 CL for divinations, darkvision 60 ft. constant detect magic, +8 to Perception to notice invisible creatures and the option to use aid another to provide a +1 bonus to CL or +2 bonus to concentration to another arcane caster.

At 7th level, the prestige archetype gains mending at will and may also use it offensively. This is a problem when you allow construct PCs, providing unlimited healing for them, so be aware of that potentially serious issue.

Starting at 9th level, the mage of the third eye halves the time it takes to craft constructs and may use Extend Spell and Widen Spell with conjuration (creation) spells. If the character has the feats, Extend Spell’s level-increase is eliminated and Widen Spell’s increase is reduced to 2. Starting at 10th level, the third eye may be activated as a move action and 2 hand pool points may be expended to add either arcane eye or see invisibility to the benefits of the respective use. Both effects may be added at once for an expenditure of 4 points.

Interesting: Starting at 14th level, any spell that creates an extradimensional space or demiplane or that moves creatures and objects through the Ethereal Plane, is doubled as though affected by Extend and Enlarge Spell sans affecting the spell’s level. At 16th level, the third eye may also be activated as a swift action, with the option to expend 4 points to gain greater arcane sight or true seeing‘s benefits. Once again, both may be used at once for a total cost of eight uses.

18th level yields the option to, as a standard action, sacrifice a prepared spell of 2nd level or higher to call a bound creature like an animal companion, eidolon, familiar, etc. to the mage – including dominated creatures, created constructs, etc. The range of this effect is governed by the spell sacrificed. Very cool. As a capstone, the mage may extend the power of the third eye for free and may also turn it off for free.

As per the tradition of this new series, we receive information on using arcanist, cleric, oracle, psychic, and witch as alternate chassis-bases, so if you wanted to play a mage of the third eye based on one of those classes, you’re in luck – the modifications generally make sense to me and allow for interesting tweaks of the engine. The prestige archetype does include a significant array of class-specific favored class options for core races and unusual races and the benefits are decent.

Carl Cramér’s mage of the third eye is definitely a cool, evocative prestige archetype. The class is versatile and works smoother than the base PrC. The respective abilities are well-dispersed as well…but the potential for infinite construct PC healing is a gross oversight that drags down the class a notch – which is why I will settle on a final verdict of 4 stars. If construct races are no thing in your game, you may consider the verdict to be 0.5 stars higher.