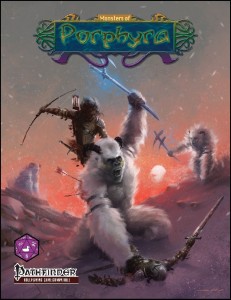 This massive bestiary clocks in at 199 pages, 1 page front cover, 1 page editorial, 2 pages ToC, 6 pages of SRD, 2 pages blank, 1 page back cover, leaving us with an impressive 186 pages of content, so let’s take a look!

We kick off this bestiary with an interesting introduction, one, in fact I feel the need to mention: The genesis of this book is uncommon. Once upon a time, Purple Duck Games released small monster pdfs, where patrons could choose old-school monsters to be updated to PFRPG – alas, the small pdfs didn’t catch and so, instead, this massive book became a flicker in the eyes of the creators. As you probably can imagine, a monster book ranks among the most expensive things you can do as a publisher, with artworks clocking in among the most expensive components in any rpg-product. Thus, this one went on the back-burner and PDG slowly, but steadily, acquired the funds (all sans kickstarter, mind you!) and crafted this massive tome. Since then, some of the artworks commissioned have been sold to other 3pps for use, so here and there, avid readers of 3pp-material may stumble across a piece of artwork already known – well, this book is where they were supposed to show up in the first place.

As always with monster books of this size, I will not do the math for each and every statblock – instead taking a broader look, checking here and there and looking for obvious glitches, flawed formatting or those that impede the game – like badly worded signature abilities, non-sense types and the kind. Got that? Neato – It should also be mentioned that the monsters all come with a small paragraph that tells us about their role on the world of Porphyra.

Now the first creature herein would be looking like a bird – the Alaihar, a small CR 10 avian creature with majestic, iridescent wings – that actually is a dragon! No, seriously – including breath weapon, interesting spellcasting (both sorc and cle-lists), this sacred bird makes for an interesting ally for good PCs and a cool twist of the holy bird-trope. Now if the gods of good are angered, their wrath is all too often downplayed – enter the alticorns of Idumea, gargantuan, equine beasts of righteous wrath, these beings can crash castles – 1/turn dealing x10 damage to objects and structures makes them fearsome bringers of ruin indeed – especially since they also are rather adept at sundering objects… OUCH!

Speaking of ouch – yes, there is a concise table to create amalgam creatures, with types being determined by awesome ranks – which reads more fun and insincere than the concise template should – for actually making ooze/outsider-combinations and the like, the template is nice, though *personally* I would have preferred a slightly more stream-lined, simpler template here or a more complex one, but either way, that’s a personal preference and will not influence my final verdict.

Now if a certain anubis-headed race has been missing from your game ever since Arcana Evolved, you’ll notice that there also are a bunch of humanoid races in here, one of which, the Anpur can be considered the heirs to the Sibeccai. Races like the yeti-like Ithn’ Ya’roo, the four-armed sabertooth feline Knük or the ogrillons – the races in here tend to fit some classic niches and should make some of the readers positively nostalgic.

Now if you prefer some more apocalyptic creatures, this is the book for you: Whether it’s truly apocalyptic creatures (via the new template), remnants of a by-gone age can also be created via another template – for two truly dastardly killer-creatures indeed. Have I mentioned that Fenrir is in here as well? If you want to go Giger/need beings from the cold expanses of space, the void-creature template should cover that itch. The pseudonatural creatures have also been updated, but changed dramatically from previous incarnations – no longer true strikes, but instead a changing of shapes. Paragon creatures also make a return – with optional mythic rules! Neat! Better yet, the sample paragon flumph gets up to CR 7/MR 3 and also comes with a full-blown origin story – which is rather awesome! Speaking of old favorites – a template-based version of creating beast lords can be found herein as well. Vampiric dragons and vampire thralls are back – though the dragon’s former treasure-hoard dependency is gone. Also: The stake-weakness doesn’t make much sense to me in the case of vampiric dragons, so overall, this template could have used some more specific divergences to help drive home the uniqueness of the undead apex predators. Not sold on that one. Magical constructs and even transformer-style constructs can be created via the material herein as well.

Beyond templates like this, we also get quite an array of fey – like the regal fey, the Njuzu, the new imperial jade dragon or the magi dragon – the apex predators also have a selection of dragon-hybrids and lesser versions like dragonnels, scorpion/dragon hybrids and similar classics you might know from previous editions – with respective, new, unique rules-representations.

If you wanted the eye-beasts to return – they are back in these pages as well – as are the crystalline horrors, gem golems and beholder related beasts that can somewhat fill the void of these ip-closed critters. It should also be noted that a new devilish archdevil-level creature can be found herein as well. Ioun remnants ( are also in here as an example of a cool, unique adversary) are also in here – and, fans of the Iron Kingdoms should take heed – the legendary Ironclad Lich gets the Pathfinder treatment herein – finally, one of the most iconic 3.X monsters back in the game!

Strange creatures and beasts like the devil dogs, burrow-mawts and the like are back again as well – though personally, I would have preferred a more deadly rules-representation of the devil dog’s throat rip than making resurrection harder. Fans of Asian critters can also rejoice – fukuranbou, komori ninja and Rokurobi, for example can be found in these pages – and some of the creatures, like the earth-gliding rognak burrowers, even come with Ultimate Psionics-compatible psionics. Haters of psionics should know, though, that the pdf is not centered on these, though. What about the rather deadly stirge swarm, the memory-stealing, decapitating, disturbing and perpetually silent stillfiends?

The book also comes with a list of making monsters, simple templates, advice for monsters as PCs, a table of monster-stats by CR, universal monster rules, lists of creature types and subtypes, monster cohorts and animal companions, monsters by type, by CR and even by roles – awesome and extremely handy for getting the right creature in a pinch – kudos for making the book that user-friendly.

Editing and formatting are very good, especially for a massive book of this size. Layout adheres to a neat, easy to print two-column full-color standard with one for artwork for each and every creature – even for the sample creatures of templates more often than not! The pdf comes fully bookmarked for your convenience.

The design team of Mark Gedak, Perry Fehr and Stefen Styrsky deliver one massive, impressive bestiary with the art of Tamas Baranya, Jacob Blackmon, Gary Dupuis, Mark Hyzer, Matt Morrow and Tim Tyler delivering solid representations in gorgeous full color. Purple Duck Games has these spontaneous inspirations, where sometimes, their pdfs come out of left field and blow your mind – and this book does reach this level of brilliance in quite a bunch of the entries. It should be noted, though, that not all of the critters reach this level of creativity and awesomeness -some of the adversaries could have used an additional signature ability or two – mainly, this is due to being creatures converted from previous editions, when it does show up – so essentially, complaining about that goes against the design intent. Still, personally, I did tend to gravitate to the creatures where PDG went all out, went utterly original. Some of the templates and creatures herein had me grin from ear to ear – and taking the extremely fair price-point into account, this bestiary is indeed a superb purchase with a great bang for buck ratio.

However, one should also mention that by now, my expectations for bestiaries are extremely high -Alluria publishing’s underwater bestiary Beasts of the Boundless Blue raised the bar regarding artwork, whereas Legendary Games’ shorter bestiaries have done the same for unique signature abilities – and while the production values of this book are great, personally, I would have loved to see a bit more in the latter department – more truly unique abilities. Still, it should be noted that this remains me complaining at a high level: The respective creatures more often than not come with at least cool combinations of abilities and unique fluff, even in the case of creatures sans unique signature abilities – and hence, my final verdict will clock in at 5 stars, omitting my seal of approval by a margin.

You can get this massive bestiary here on OBS and here on d20pfsrd.com’s shop!

You can support the creation of more monsters for Porphyra via Patreon – here’s the link!